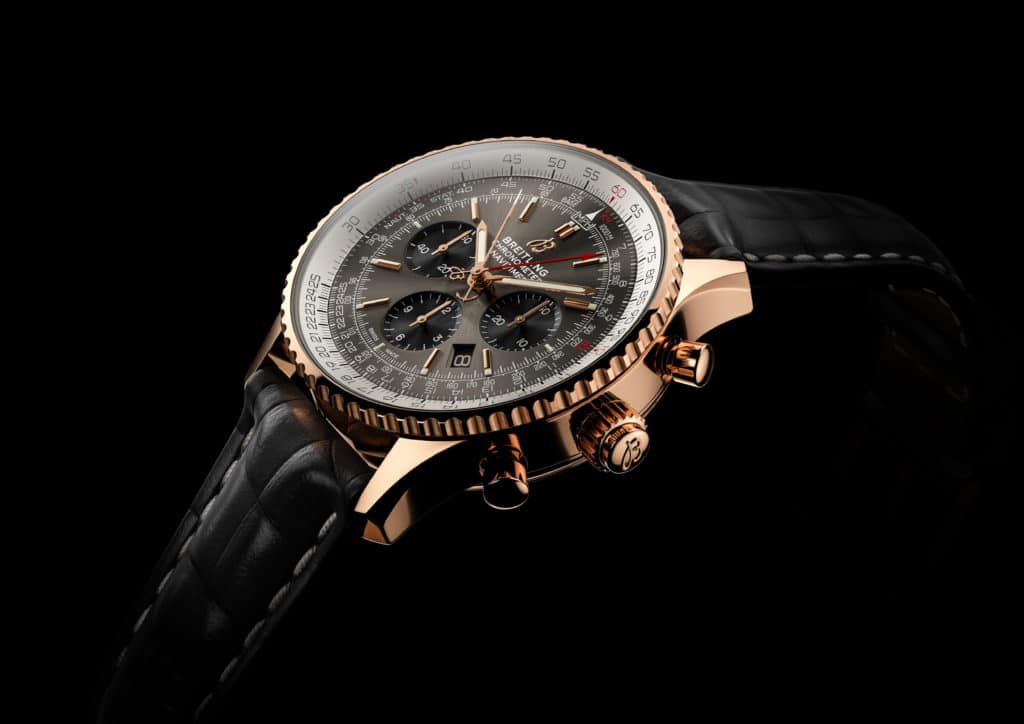 The Breitling Navitimer Chronograph – It has been more than 85 years since Breitling introduced the first modern chronograph, whose influence on watch design has been incalculable. With its new Navitimer B03 Chronograph Rattrapante 45, featuring its interpretation of one of watchmaking’s grandest complications, the brand has shown that it remains at innovation’s cutting edge. The Navitimer B03 Chronograph Rattrapante 45 has an 18 k red gold case and is equipped with Breitling’s  Manufacture Caliber B03, a unique split-second movement protected by two patents. Its innovative construction ensures maximum precision, sturdiness, and reliability. 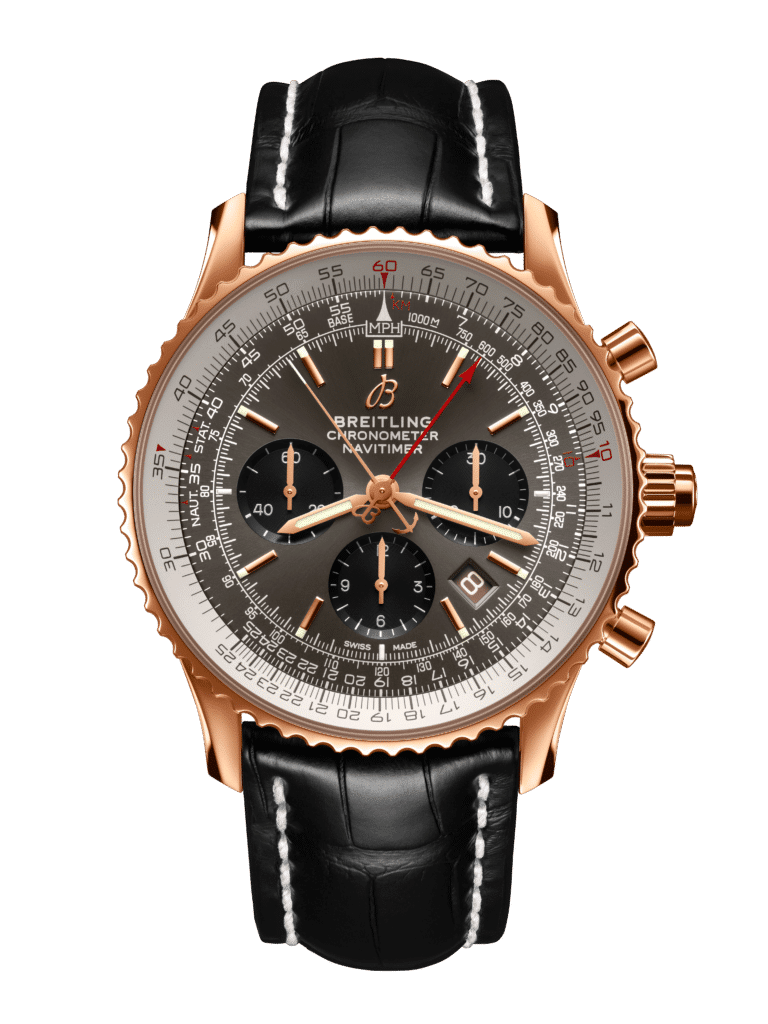 The rattrapante is one of the most sophisticated complications in all of watchmaking. Put simply, with two superimposed central chronograph hands, it can measure two elapsed times simultaneously. The rattrapante feature in the new Breitling Navitimer B03 Chronograph Rattrapante 45 is very special indeed, and there are some additional details that define this watch as an instant classic.

The Navitimer B03 Chronograph Rattrapante 45 is as aesthetically impressive as it is technically sophisticated. Housed in a big, bold 45 mm 18 k red gold case, it is distinguished by a Stratos Gray dial. Its hour markers and hour and minute hands are coated with Super­LumiNova®, which guarantees legibility in all lighting conditions. The watch has a bidirectional rotating bezel with the circular slide rule that has long been associated with Breitling’s Navitimers.

The Navitimer B03 Chronograph Rattrapante 45 offers another exquisite detail. Normally, a Breitling Navitimer  features a stylized “B” logo with an anchor symbol adorning the base of the chronograph hands. But here there is a subtle refinement, with the logo divided between two hands. The B is on the red chronograph hand, while the anchor sits on the split­second hand. As a result, the two elements of the logo are separated when the split­second hand is stopped and reform when the hands realign with each other.

The split­second pusher, which is housed in the crown at 3 o’clock, serves to stop and restart the split­second hand as often as desired during a timing operation, allowing the wearer to measure split times or compare the results of several competitors. 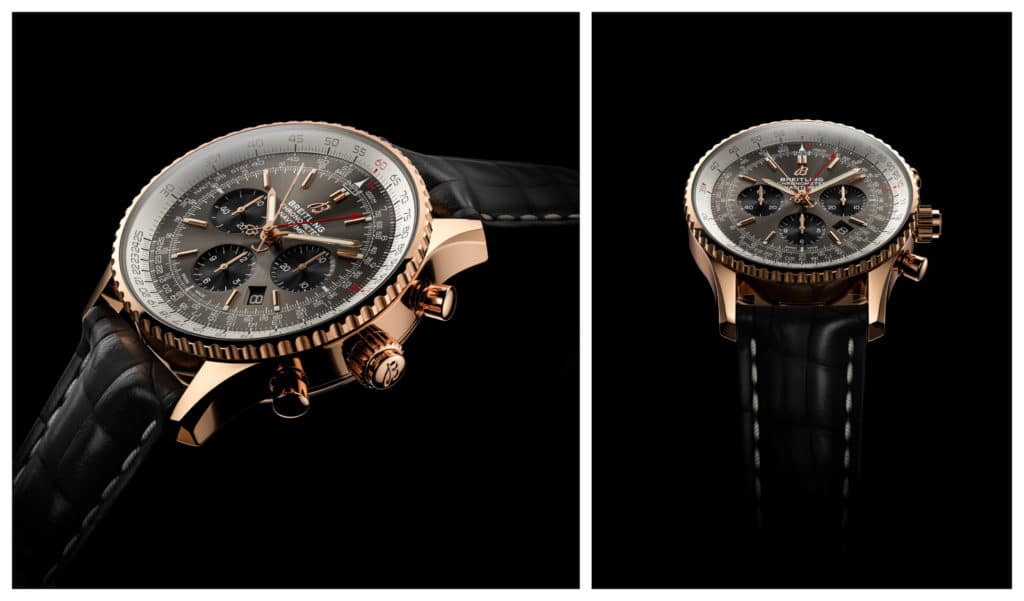 The Breitling Manufacture Caliber B03 was produced by the brand at its Chronométrie facility in La Chaux­deFonds. The COSC­certified chronometer, whose performance can be viewed through the watch’s transparent sapphire caseback, offers a power reserve of around 70 hours and is protected by a five­year warranty. The watch, with its striking 18 k red gold case, is presented on a black alligator leather strap with a pin buckle.

The Navitimer and Breitling’s Chronograph Legacy

Since its development in 1952, the Breitling Navitimer has been one of the world’s most admired chronographs, and, with some recent additions to the family, Breitling has been introducing this watchmaking legend to a whole new generation of enthusiasts around the world.

The Navitimer is arguably the most iconic of all Breitling wristwatches. This twentieth­century classic remains popular in the twenty­first century, more than 65 years after it was first launched to meet the needs of a growing commercial and recreational aviation market. Thanks to the circular slide rule that was capable of performing a range of calculations relevant to aviation, the Navitimer was adopted by pilots and especially favored by the Aircraft Owners and PilotsAssociation (AOPA). Instantly recognizable, this timeless chronograph’s design is as appealing today as it was when it was introduced.

Behind the Navitimer are more than a century’s worth of horological breakthroughs. Breitling developed the first independent pusher located at the 2 o’clock position in 1915 and a second independent pusher in 1934, shaping the modern chronograph in both form and function. The brand introduced a self­winding chronograph – one of the world’s first – in 1969, and all true watch aficionados are passionate about the classic 1944 Duograph, whose split­second chronograph movement was developed in part by Breitling.

Breitling has long been regarded as a leader in mechanical chronograph movements, and the new Navitimer B03 Chronograph Rattrapante 45 in 18 k red gold enhances the brand’s status, demonstrating just how exciting a mechanical wristwatch can be.

Check out all the Breitling pieces in stock. Click here & view our online boutique.

Since 1884, Breitling has established a global reputation for high­precision timepieces, its pioneering role in the development of the wrist chronograph, and its uncompromising commitment to design excellence. With the brand’s storied association with aviation, Breitling has shared the finest moments in humankind’s conquest of the skies. Renowned for its spirit of innovation, it has also earned a place of
privilege in the worlds of science, sport, and technology. Breitling manufactures its own movements inhouse and the quality of every watch is confirmed by its status as a COSC­certified chronometer, made in Switzerland.