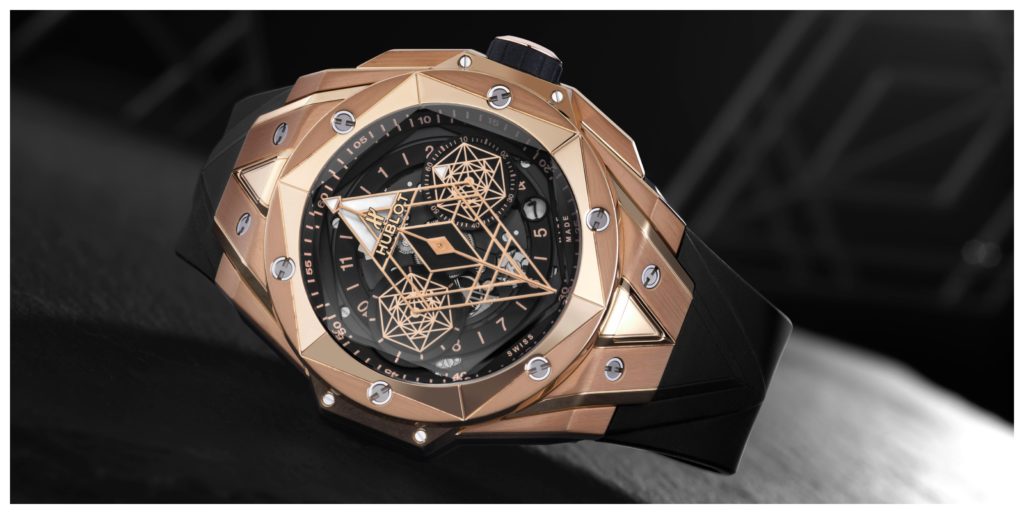 More ambitious than the Big Bang Sang Bleu launched in 2016, the new Big Bang Sang Bleu II passionately channels the design skills of world famous tattoo artist Maxime Plescia-Buchi. A case with more finely-chiselled lines, conveyed in three dimensions. An expression of the passage of time, the hands – two elongated diamonds and an arrow – are stylised fragments of tattoos, set above a hypnotic chronographic movement

Geometry is the universal expression of an abstracted and systematized “weltanschauung”. It carries value, ideas and messages through time and space, and thus unifies human kind in itself as an ultimate manifestation of the Human Mind. Maxime Plescia-Buchi 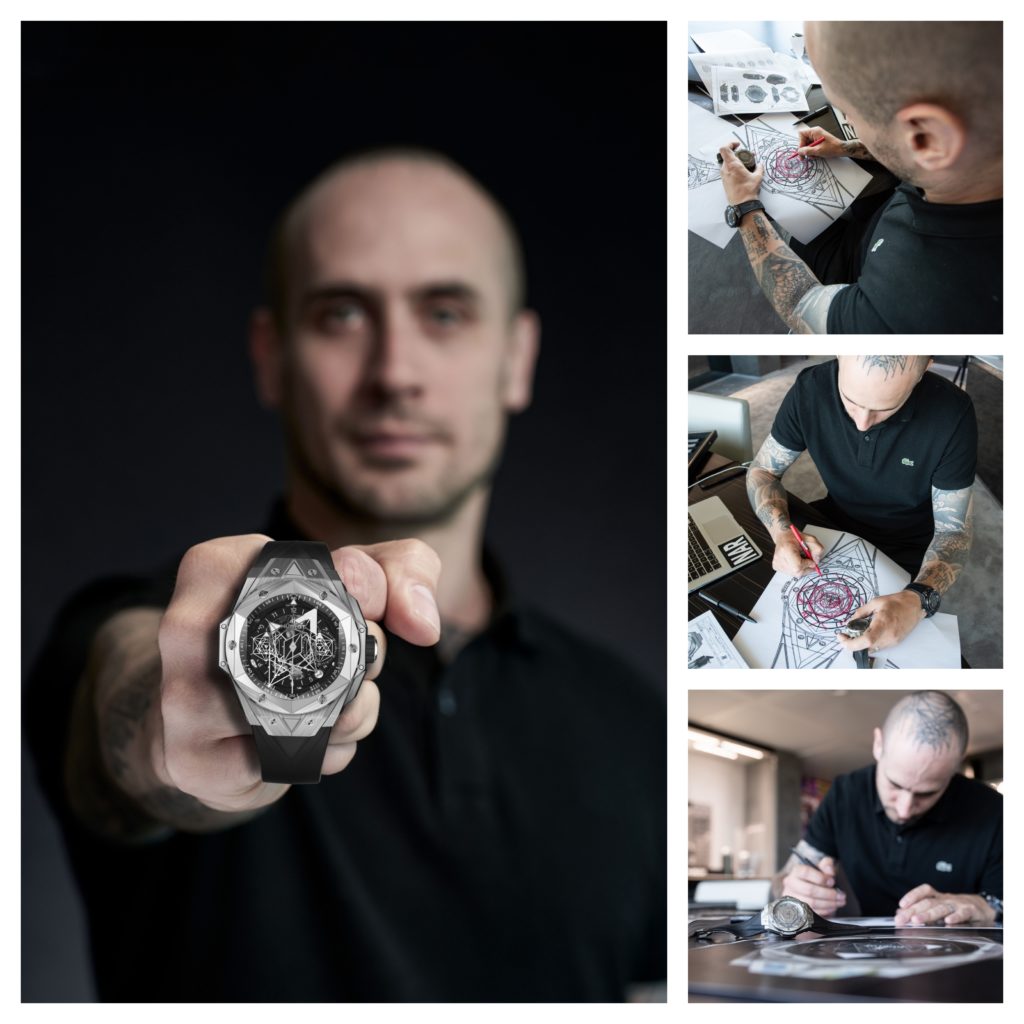 Thanks to Maxime Buchi and Sang Bleu, the art of tattooing has evolved to reach new heights. For this second collaboration, we wanted to reflect on this development by extending the motif across the case and hands. Each of these illustrates the graphic style of this illustrious tattoo artist.

Even more disruptive, the Big Bang Sang Bleu II channels the creative inspiration of Maxime Plescia-Buchi into its three-dimensional angles and edges. The motif spans the case, cutting into its hexagonal bezel, and carving into the sapphire crystal, juxtaposed against the hands with their geometric lines, and moulded onto the interchangeable bracelet. The dial plays with transparency, allowing glimpses of the Unico movement. It is feat of construction, almost architectural in scope, in a 45-mm case. 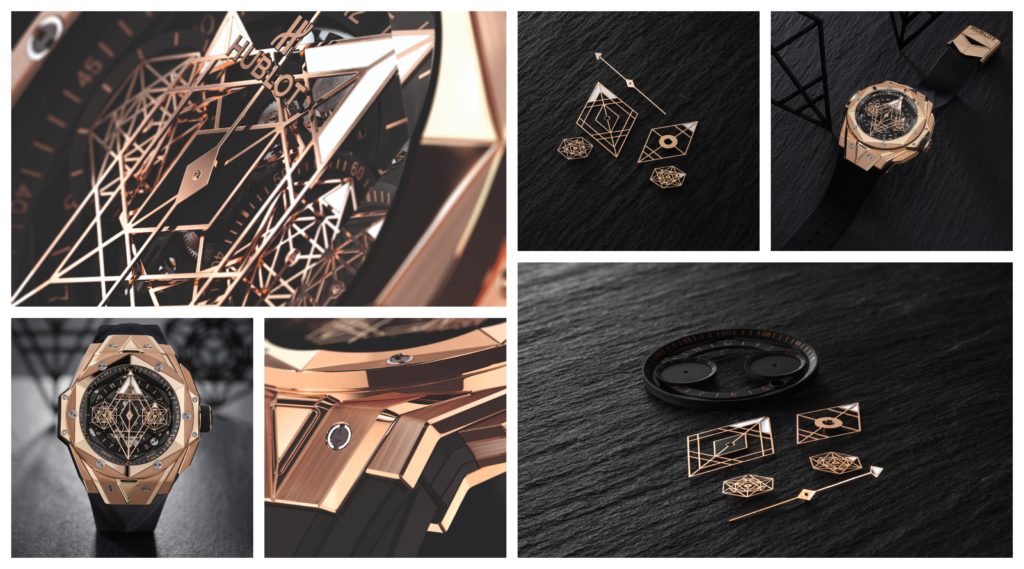 Within the meticulously interlaced geometric lines of this new case lies the HUB1240 Unico manufacture self-winding chronograph movement: the chronograph seconds are tracked along a straight hand, whilst the chronograph minutes complete their laps on one of the two discs on the dial. It oscillates at a frequency of 28,800 vibrations per hour, for a period of 72 hours. Two hundred titanium and one hundred King Gold pieces will be released.

A key component of contemporary Pop Culture, tattooing is no longer the sole preserve of a largely masculine underground scene. From a primitive practice to a celebrated field of Art, and cultural
phenomenon, its growing creative influence shows tattooing is not merely a trend but a cultural shift which will last and influence all generations to come. The new Big Bang Sang Bleu II is the horological expression of a tattoo, set in motion with timeless precision, unifying materials and crafts through geometry by Sang Bleu’s founder.

Founded in Switzerland in 1980, HUBLOT is defined by its innovation, which began with the highly original combination of gold and rubber. This “Art of Fusion” stems from the imagination of its visionary Chairman, Jean-Claude Biver, and has been driven forward by CEO Ricardo Guadalupe since 2012. The release of the iconic, multi-award-winning Big Bang in 2005 paved the way for new flagship collections (Classic Fusion, Spirit of Big Bang), with complications ranging from the simple to the highly sophisticated, establishing the extraordinary DNA of the Swiss watchmaking house and ensuring its impressive growth.

Keen to preserve its traditional and cutting-edge expertise, and guided by its philosophy to “Be First, Different and Unique”, the Swiss watchmaker is consistently ahead of the curve, through its innovations in materials (scratch-resistant Magic Gold, ceramics in vibrant colours, sapphire), and the creation of Manufacture movements (Unico, Meca-10, Tourbillon).

HUBLOT is fully committed to creating a Haute Horlogerie brand with a visionary future: a future which is fused with the key events of our times (FIFA World CupTM, UEFA Champions LeagueTM, UEFA EUROTM and Ferrari) and the finest ambassadors our era has to offer (Kylian Mbappé, Usain Bolt, Pelé).