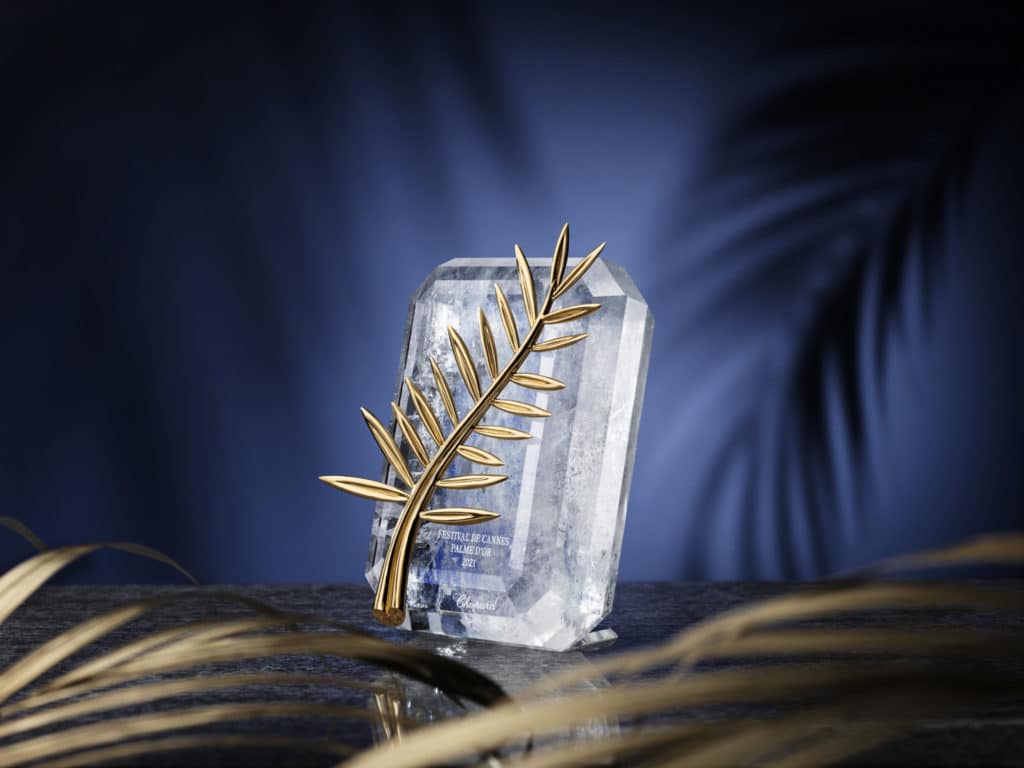 Every year, the Palme d’or, the Holy Grail of the Seventh Art, is awarded to the best film in the competition at the Cannes International Film Festival. The latest feature film to win it, Parasite by Bong Joon Ho, quite simply rewrote the history of cinema, confirming the absolute prestige and power of this trophy. As a longstanding partner to the Festival, Chopard is proud to accompany this annual launch into orbit of an exceptional talent. Since 1998, the Maison has been the Artisan of the Palme d’or and indeed of all the trophies awarded at the Festival’s closing ceremony.

On May 25th 2019, Bong Joon Ho was awarded the Palme d’or by Catherine Deneuve – having been unanimously chosen by a jury chaired by Alejandro Gonzalez Inarritu – for his film Parasite. Stroking the blue morocco leather case containing the trophy, the overawed and deeply moved South Korean filmmaker admitted:

“I was just a timid film buff who decided to become a film director at the age of 12. I never even imagined that I would touch this trophy. And winning the award is more priceless than ever.”

From that magical moment suspended in time, Parasite, a huge hit that reconciled audiences and critics in the same collective euphoria, swept up everything in its path, even conquering Hollywood.

The Palme d’or, a fantastic platform

The phenomenal triumph of Parasite reminded us that being awarded the supreme prize at the Cannes Film Festival offers the most spectacular launch pad for the career of both films and filmmakers in the firmament of the Seventh Art, confirming that the Palme d’or remains the most precious ‘open sesame’ for winning the hearts of the whole world. 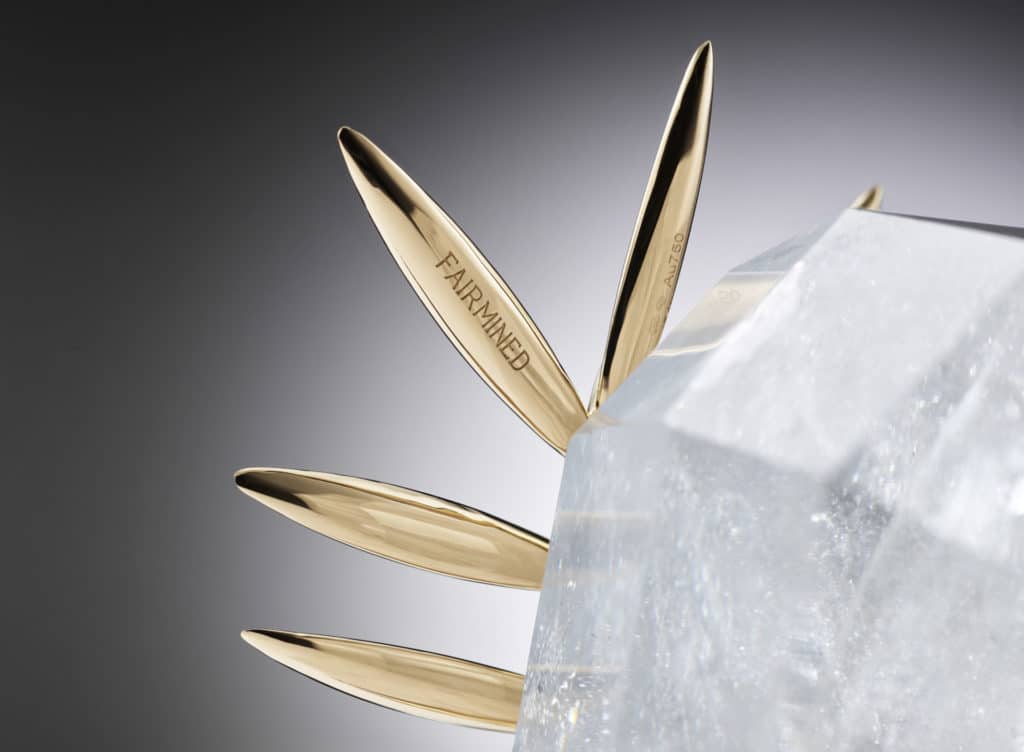 After scooping every major award in the world one by one, the film honoured by the Palme d’or ended its wild ride in style by taking home the four most prestigious statuettes at the 2020 Oscars (Best Picture, Best Director, Best Original Screenplay, gBest International Film) and by accomplishing two feats at the same time: not only was Parasite the first non-English speaking film to win the Best Picture Oscar, but also the first film to win the Best Picture and Best International Film Oscars together. This is unprecedented in the 92-year history of the American Film Academy! “Since its huge win at Cannes, Parasite has continued to rack up the most prestigious awards and to break records, making it undoubtedly one of the most repeatedly distinguished films in the history of cinema. A historic prize!” enthused Thierry Frémaux, General Delegate of the Cannes Film Festival.

Chopard, partner of the greatest cinematographic adventures The story began in 1997. During a meeting with Pierre Viot (then President of the Cannes Festival), Caroline Scheufele (Co-President and Artistic Director of Chopard) suggested redesigning the Palme d’or. Symbolically, this keen film lover imagined a heart at the base of the Palme d’or branch presented the following year, giving a new lease on life to the trophy.

Through this thrilling palm, which has symbolised hearts beating in unison for more than 20’ years, a veritable hand-sculpted jewel composed of 19 yellow gold leaves resting on a unique cushion of rock crystal, the Maison Chopard, jeweller of the red carpet and official partner of the Cannes Film Festival since 1998, continues to share its passion for the cinema and its emotions with the entire world. 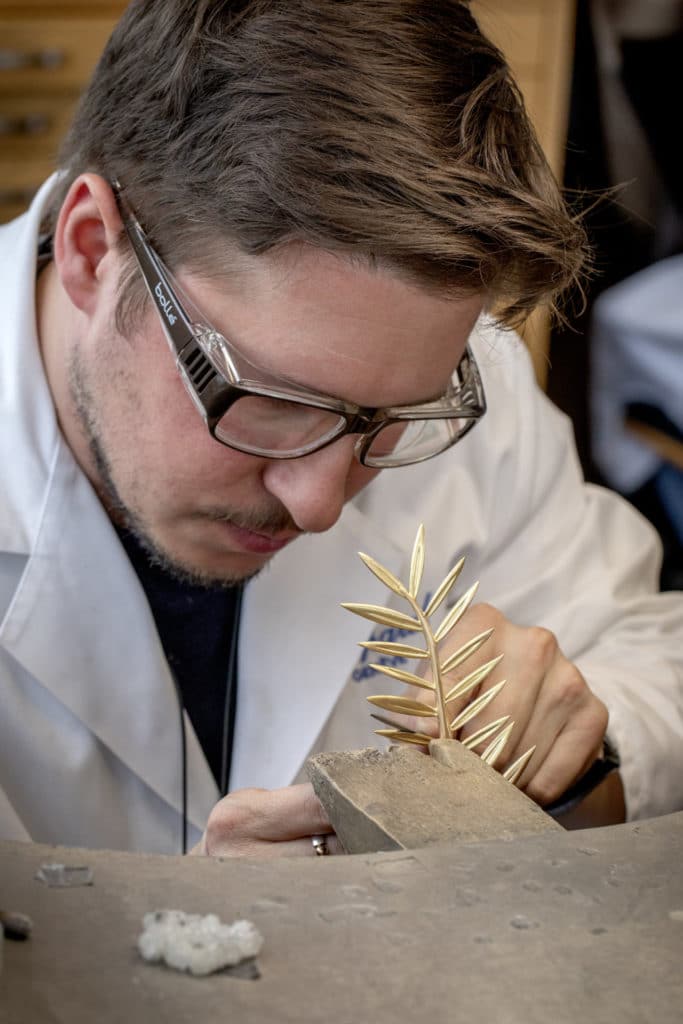 A shining example of the Maison’s commitment to sustainable luxury, the Palme d’or has been crafted in ethical Fairmined-certified yellow gold since 2014, making it the only ethical trophy in the world of cinema crafted with respect for people and for the environment.

In addition to the Palme d’or for the best film, the Maison’s Haute Joaillerie workshops craft all the trophies – in rock crystal engraved with a palm – awarded to the other winners at the closing ceremony, a traditionally unforgettable evening that opens up the realm of every possibility, as we now know more than ever.

In addition to the Palme d’or, Caroline Scheufele is also behind the Trophée Chopard, awarded each year since 2001 during the Cannes fortnight to an up-and-coming actress and actor, thus helping to shape the future of cinema.

View all Chopard watches and jewellery in stock on our online boutique. CLICK HERE

Compare Products
Clear All Compare Now
We use cookies on our website to give you the most relevant experience by remembering your preferences and repeat visits. By clicking “Accept All”, you consent to the use of ALL the cookies. However, you may click "Cookie Settings" to provide a controlled consent. Read More
Cookie SettingsAccept All
Manage consent