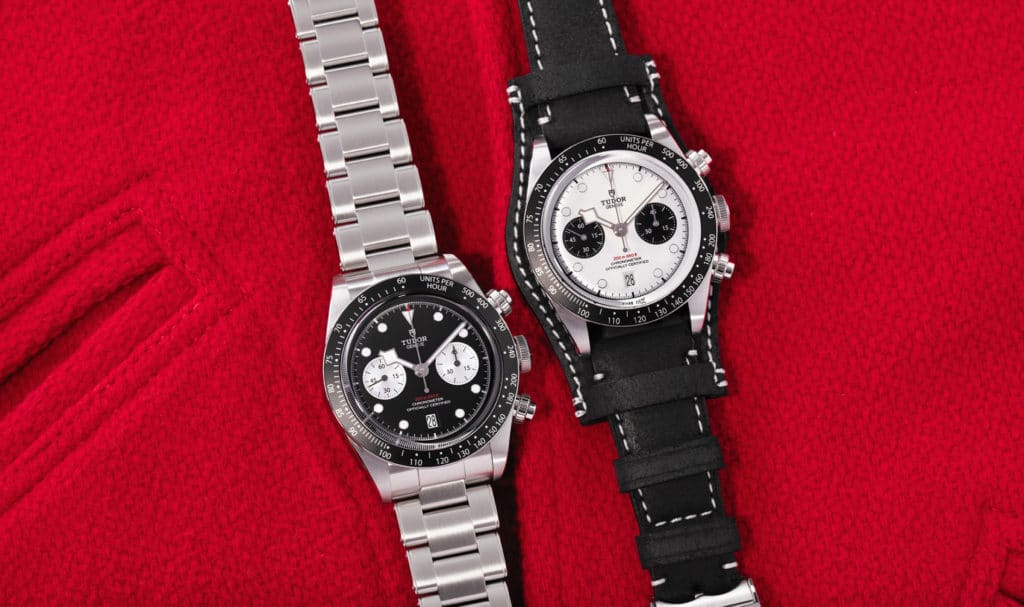 To mark 50 years of its chronographs, TUDOR is relaunching its Black Bay Chrono model in steel with a reworked case and two dial options with contrasting sub-counters in the purest tradition of the sports chronograph.

Since the launch in 1970 of the Oysterdate model, its first chronograph, TUDOR has always produced watches that are closely tied to the world of motor sport. Since 1954, TUDOR has likewise been constantly improving its professional divers’ watches. The Black Bay Chrono model combines these traditions in a sports chronograph for purists, with contrasting sub-counters and a high-performance automatic Manufacture Calibre, with column wheel and vertical clutch. 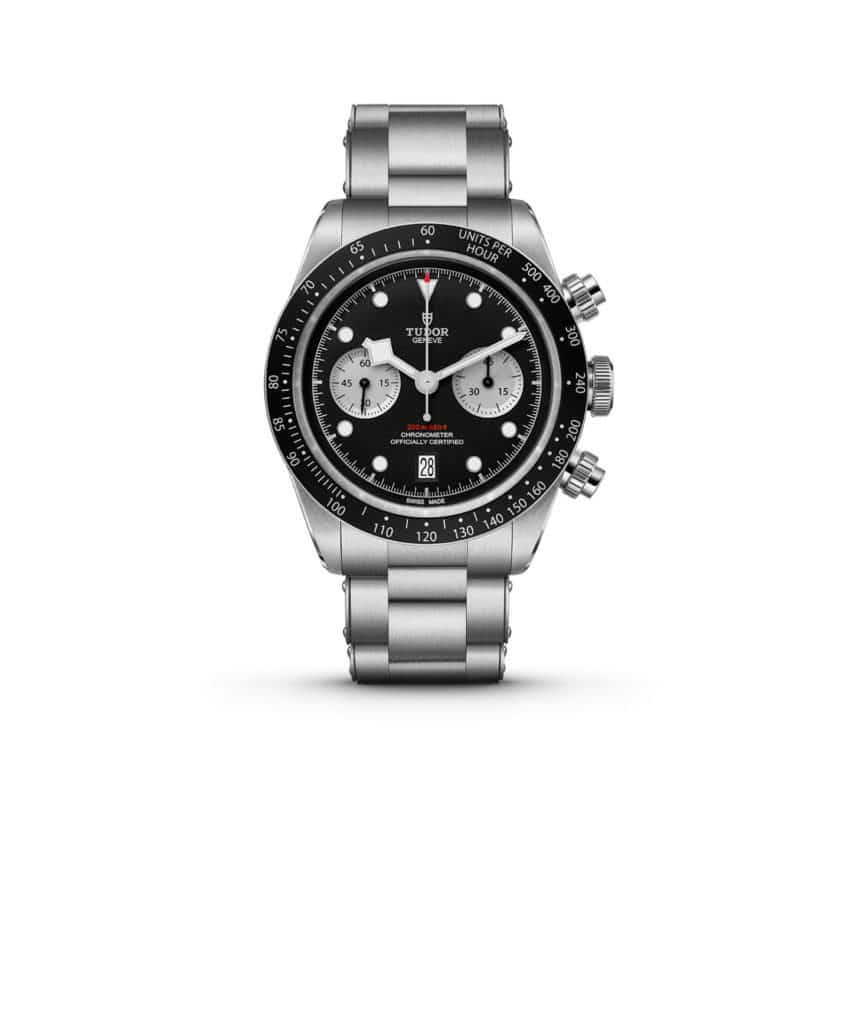 THE SPIRIT OF EARTH AND SEA

Remaining faithful to the Black Bay aesthetic, the Black Bay Chrono model has made the famous “Snowflake” hands – a brand signature for divers’ watches since 1969 – its own, in a version honed to ensure optimum readability on its domed dial. Available in two versions, matt black or opaline, the dial includes two hollowed sub-counters in contrasting colours, matt black and white opaline respectively, for optimum readability. Inspired by the first generation of TUDOR chronographs, there is a 45-minute counter and a date aperture positioned at 6 o’clock. The recognisable characteristics of the Black Bay are preserved in a steel case with a 41-millimetre diameter refined by the ingenious cut of the lower part of the sapphire crystal and a repositioned movement. Typical of the scrupulous attention to detail that is characteristic of the brand, the design of the stainless steel pushers has been inspired by the very first generation of TUDOR chronographs. A fixed bezel in stainless steel with a tachymetric scale insert in black anodised aluminium completes the distinguished appearance of this sporty new chronograph.

The fabric strap is one of the hallmarks of TUDOR, which, in 2010, became one of the first watchmaking brands to offer it with its products. Woven in France on 19th century Jacquard looms by the Julien Faure company in the St-Etienne region, its manufacturing quality and comfort on the wrist are unique. In 2020, TUDOR and Julien Faure, a 150-year old family company, celebrated ten years of partnership that began with the Heritage Chrono – the first model to be equipped with a fabric strap created by the craftsmen – that was launched at Baselworld 2010. 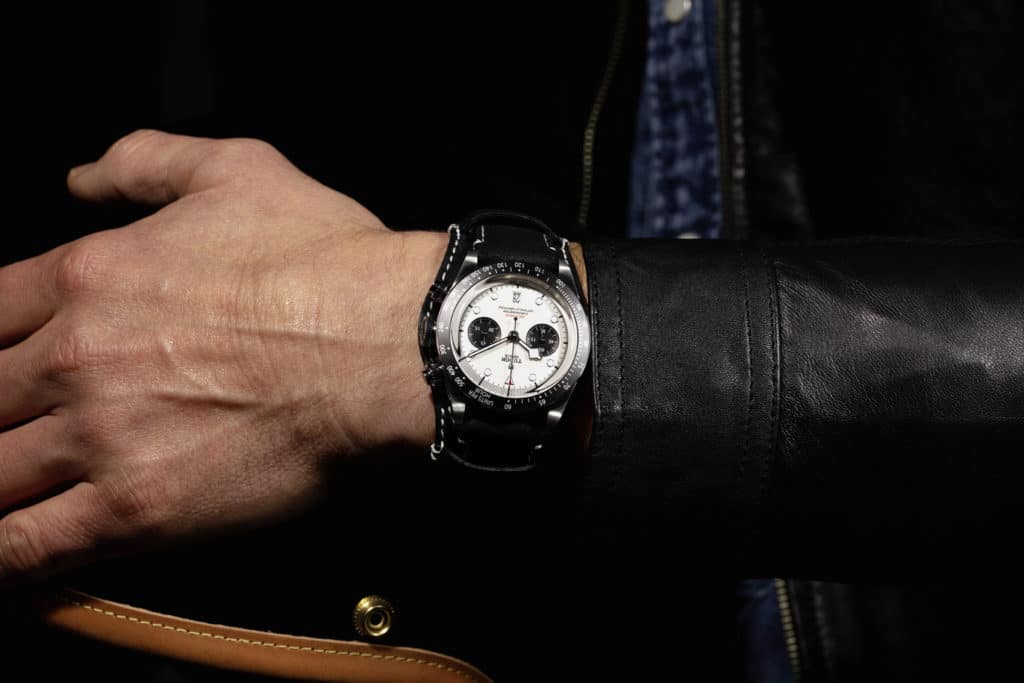 The Black Bay Chrono model features a black strap with a motif chosen by TUDOR and woven by the craftsmen. The model is also available mounted on a stainless steel bracelet inspired by the folding riveted bracelets made by TUDOR in the 1950s and 1960s. These were famous for having rivet heads for attaching the links, shown on the side of the bracelet. The links also had a distinct stepped construction. These two aesthetic details appear on today’s model, which still integrates modern manufacturing methods with solid links. Finally, entirely in keeping with the spirit of “1970s racing”, the Black Bay Chrono is offering another choice of bracelet: a bund in aged black leather with ecru topstitching and folding clasp.

The Manufacture Chronograph Calibre MT5813, which powers the Black Bay Chrono model, displays hour, minute, second, chronograph and date functions. It has the finish typical of TUDOR Manufacture Calibres. Its rotor in tungsten monobloc is openwork and satin-brushed with sand-blasted details, and its bridges and mainplate have alternate sand-blasted, polished surfaces and laser decorations. 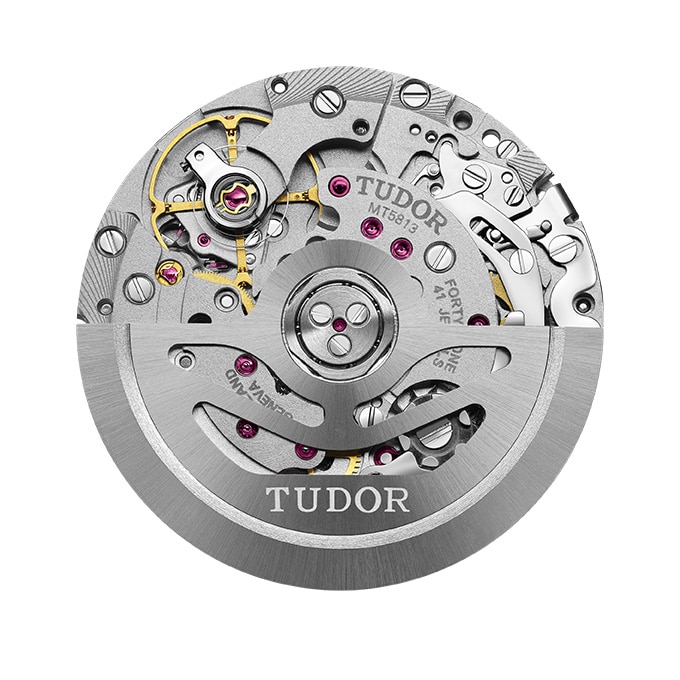 Boasting a 70-hour power reserve and a silicon balance spring, the Manufacture MT5813 chronograph Calibre is certified by the Swiss Official Chronometer Testing Institute (COSC), with its performance exceeding the standards set by this independent institute. In fact, where COSC allows an average variation in the daily running of a watch of between -4 and +6 seconds in relation to absolute time in a single movement, TUDOR insists on -2 +4 seconds’ variation in its running when it is completely assembled. A high-performance movement, it was crafted in the purest watchmaking tradition, with a column wheel mechanism and vertical clutch. In keeping with the TUDOR philosophy of quality, it presents extraordinary robustness and reliability, guaranteed by the array of extreme tests applied to all TUDOR products.

Derived from the chronograph manufacture calibre Breitling 01, with a high-precision regulating organ developed by TUDOR and exclusive finishes, this movement is the result of a lasting collaboration between the two brands, which have chosen to pool their expertise in the design and production of certain mechanical movements.

Like other models in the Black Bay range, the Black Bay Chrono has adopted TUDOR’s characteristic angular hands known as “Snowflake” that first appeared in the brand’s 1969 catalogue. The result of a subtle blend of traditional aesthetics and contemporary watchmaking, the Black Bay line is far from simply being an identical rerelease of a classic. Resolutely anchored in the present, it brings together almost seven decades of TUDOR divers’ watches. Whilst it is neo-vintage in conception, its manufacturing techniques and its robustness, reliability, durability and precision as well as the quality of its finish are above modern industry standards. 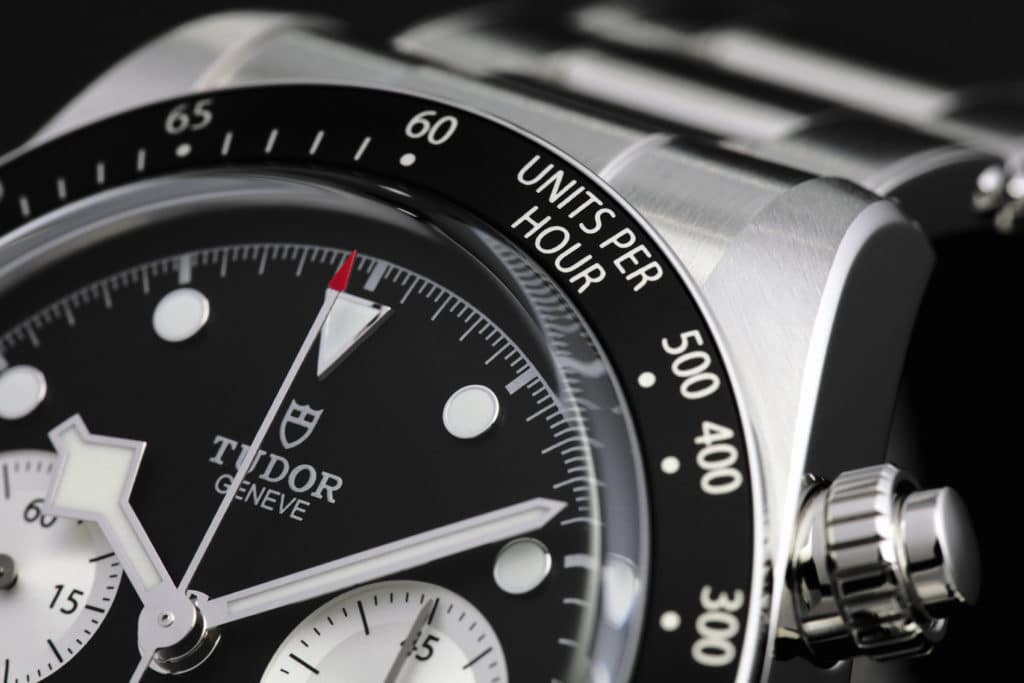 In 1970, TUDOR introduced its first chronograph, the Oysterdate. A watch that was both robust and functional, its unique design was characterised by its bright colours, its pentagonal hour markers shaped like a baseball home plate, its 45-minute counters and its date function at 6 o’clock. Immediately adopted by the world of motor sport, it paved the way for 50 years of technical chronographs that TUDOR has never stopped improving.

Since its creation by Hans Wilsdorf in 1926, and in line with his vision of an ideal watchmaking product, TUDOR has never stopped producing the most robust, durable, reliable and precise watches in existence today. Bolstered by this experience, and confident in the knowledge of the superior quality of its watches, TUDOR is offering a five-year guarantee on all its products sold after January 1st 2020. This guarantee does not require the watch to be registered or any maintenance checks and is transferable. All TUDOR products bought between July 1st 2018 and December 31st 2019 will therefore benefit from an 18-month extension to their guarantee, that is to say, a total of three and a half years. TUDOR also recommends that its watches should be serviced approximately every 10 years depending on the model and the extent of its use on a day-to-day basis. 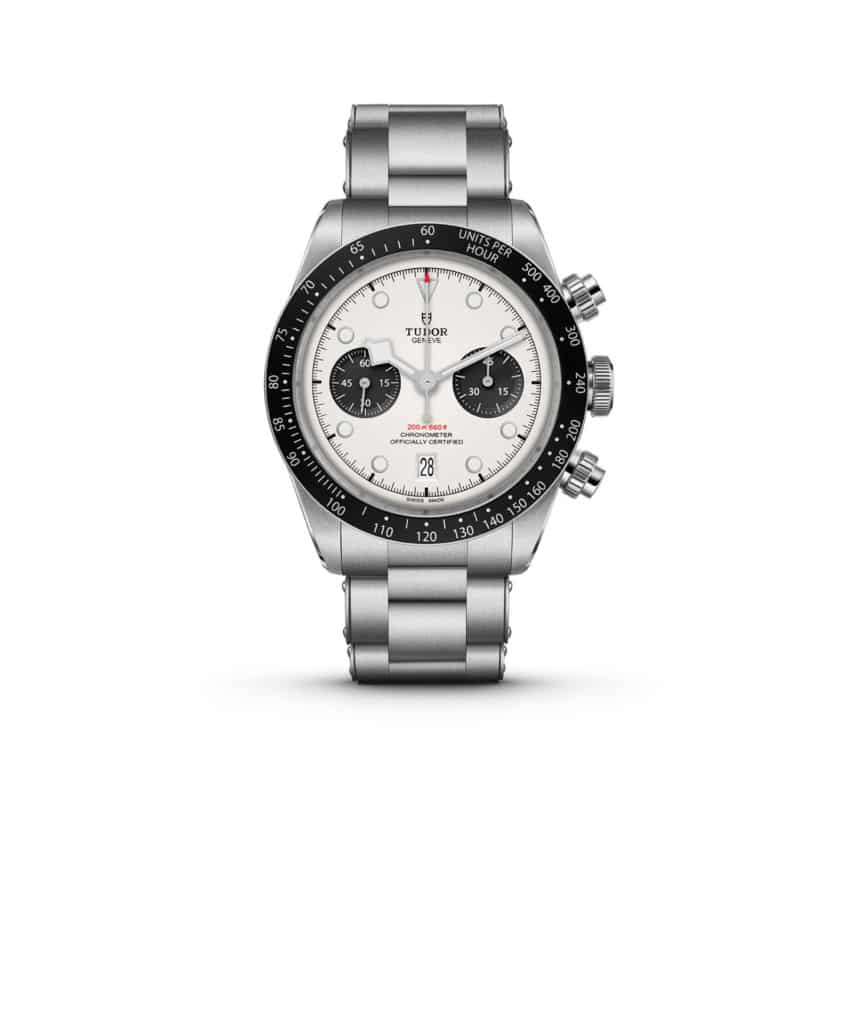 Check out all the Tudor watches in stock on our online boutique. CLICK HERE

TUDOR is an award-winning Swiss-made watch brand, offering watches with refined aesthetics, proven reliability and unique value for money. The origins of TUDOR date back to 1926, when “The Tudor” was first registered as a brand on behalf of the founder of Rolex, Hans Wilsdorf. He created the Montres TUDOR SA Company in 1946 to offer watches with the quality and dependability of a Rolex, at a more affordable price point. Because of their robustness and affordability, throughout their history TUDOR watches have been chosen by the boldest adventurers on land, underwater and on ice. Today, the TUDOR collection includes emblematic models such as Black Bay, Pelagos, 1926 and Royal. Since 2015, TUDOR has also offered mechanical manufacture movements with multiple functions and superior performance.

Black with silver counters, or opaline with black counters, domed

Hours and minutes hands at the centre

Chronograph seconds at the centre