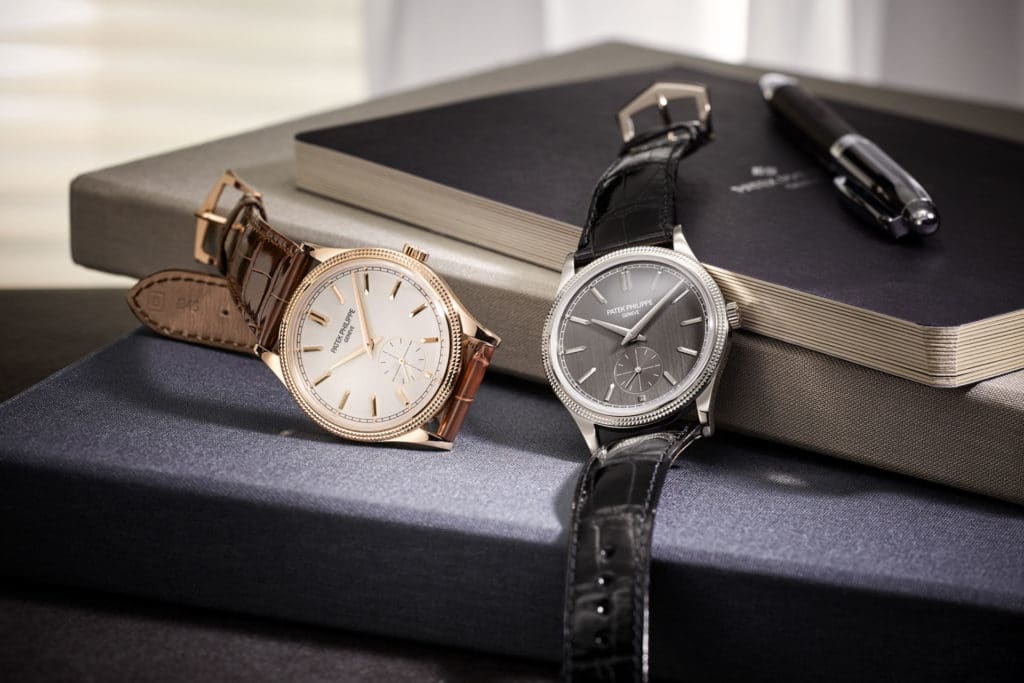 The famous Calatrava with the guilloched hobnail bezel is one of the most inimitable examples of the typical Patek Philippe style. It now comes in a new version with a decidedly contemporary look, a slightly larger diameter, and a dial with applied hour markers. This sleek, slender,and elegant men’s wristwatch in rose or white gold also has a totally new manually wound Patek Philippe movement with a power reserve of65 hours.

Launched in 1932 as the Ref. 96 (the first model of the manufacture with a reference number), the Calatrava established itself as the quintessence of the classic round wristwatch. It is deemed by Patek Philippe to be one of the most beautiful manifestations of timeless elegance. Its puristic design reflects the minimalistic Bauhaus principle (function determines the form of an object). It has been repeatedly reinterpreted in numerous versions for ladies and men. They featured flat or slightly rounded bezels, smoothly polished, set with precious stones or guilloched. The models ranged from ultra-thin to impressive, with officer’s cases and sleek dials that showed merely the hours and minutes, sometimes also the seconds or further indications, gradually forming one of the manufacture’s most comprehensive collections. 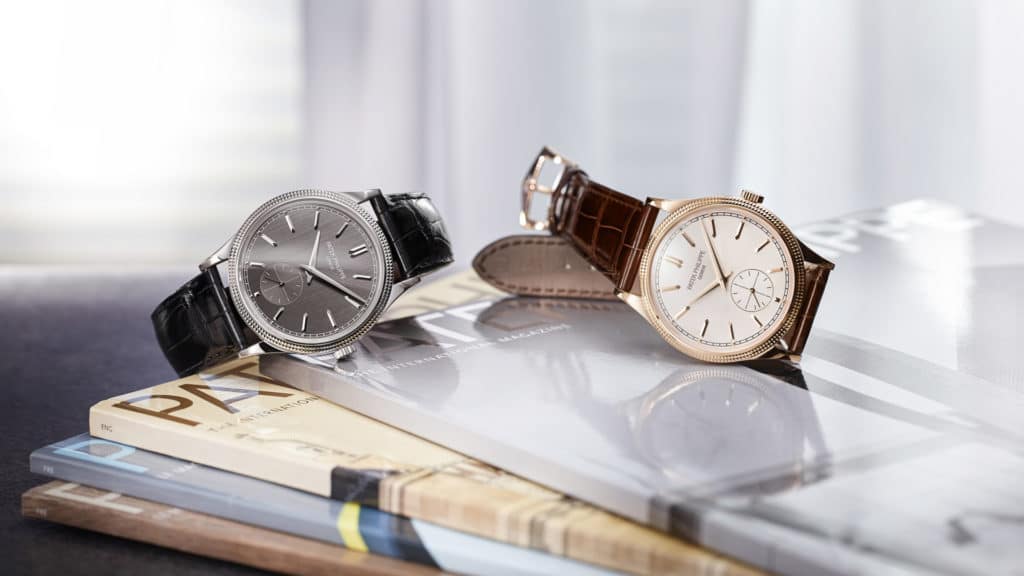 Within this proud tradition, some Calatrava models attracted considerable attention with lasting impressions: They were the versions with guilloched hobnail patterns on the bezels. This diamond-polished motif composed of small pyramid tips already appears on the bezel of a Calatrava in 1934, the Ref. 96D (D for décor). It has the same manually wound caliber 12-120 movement, the same curved lugs and the same dial with applied hour markers and small seconds as the Ref. 96. In 1972, this type of bezel also graces the manually wound Ref. 3520D (caliber 177), with hours and minutes, Roman numerals, and straight lugs. The year 1985 marks the debut of a Calatrava that would become one of the most famous timepieces in the world of horology. It was the legendary Ref. 3919 with the manually wound caliber 215 PS, subsidiary seconds at 6 o’clock, white dial with black lacquered Roman numerals and straight lugs.

The model was produced for over 20 years. This period also saw versions with smaller diameters for feminine wrists, such as the Ref. 4819 (1987) with a quartz movement, the Ref. 4820 (1988) with a quartz movement and additionally with a gem-set bezel, as well as the Ref. 4809 (1991) with the manually wound caliber 16-250 movement. The Ref. 5115 (2000) with the manually wound caliber 215 PS reappears with the curved lugs inspired by the Ref. 96D. The Ref. 5120 with straight lugs and the self-winding caliber 240 movement debuted in 2001. With its slightly extended, finer Roman numerals and enlarged case (36 mm instead of 33.5 mm), the Ref. 5119 (2006) is a re-edition of the Ref. 3919, but retains the manually wound caliber 215 PS and the straight lugs. In 2009, it is complemented with the Ref. 5116 with a dial in grand feu enamel. In 2016, a guilloched hobnail motif on the case flanks and one of the two dials of the Ref. 6300 Grandmaster Chime (Patek Philippe’s most complicated wristwatch) emphasized the significance of this decoration that is so typical for the manufacture. Since 2018, with the exception of some limited rare handcrafts editions (Ref. 5177), the “Clous de Paris” pattern has no longer appeared in Patek Philippe’s current collection. This is an ideal occasion to prepare its grand comeback.

A cult model with a reworked design

Patek Philippe has endowed this Calatrava “Clous de Paris” with fresh elan by updating its iconic design in a very contemporary manner. The new Ref. 6119 – the number pays tribute to the storied 3919 legend and the Ref. 5119 from 2006 – distinguishes itself mainly with the slightly larger diameter of 39 mm. It reflects the changing preferences of our era and emphasizes its presence on the wrist without compromising the slender elegance of its case.

A further design development: Black lacquered Roman numerals on a white background in the Refs. 3919 and 5119 have been replaced by applied faceted “obus” markers in 18K gold (with double markers at 12 o’clock). These markers emphasize the timelessly sleek aspect of the dial with its larger diameter. Thus, Patek Philippe has returned to the roots of the Calatrava design vocabulary and to the Refs. 96 (1932) and 96D (1934). They were endowed with the same type of hour markers. The gold dauphine-style hour and minute hands also recall the Ref. 96 but have three instead of two facets. They assure excellent legibility not least because of the railway-track minute scale at the periphery of the dial. The slender “cheveu”-style seconds hand rotates on the subsidiary subdial at 6 o’clock which is divided into four quarters.

The round bezel is decorated with a guilloched hobnail pattern and exhibits a slightly wider chamfered profile as well as a thin, polished fillet that frames the box-form sapphire crystal. 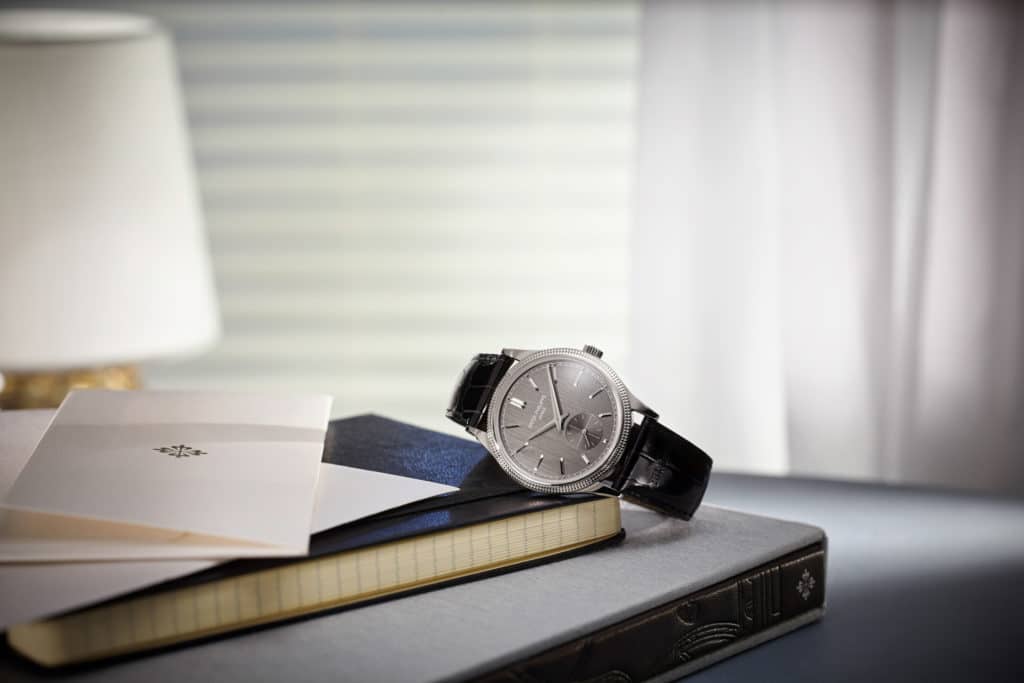 The shape of the strap lugs was reworked as well. The straight lugs of the Ref. 3919 are replaced with curved lugs inspired by the Ref. 96 and the self-winding Calatrava models from the 1990s. They create a perfect transition from the case to the strap, assuring a comfortable fit.

This new flagship of the Patek Philippe style is new masterpiece among the manufacture’s grand classics;it comes in two versions. The Ref. 6119R-001 combines a rose-gold case with a silvery grained dial as well as applied hour markers and hands in rose gold. It is worn on a shiny chocolate brown alligator strap with a rose-gold prong buckle. The Ref. 6119G-001 in white gold subtly plays with light on a charcoal gray dial with attractive contrasts – a vertical satin finish interrupted by the snailed subsidiary seconds dial. The applied hour markers and hands are made of the same metal as the case. This watch is worn on a shiny black alligator strap with a white-gold prong buckle. The characteristic shape of the prong buckles for both Ref. 6119 watches was originally designed explicitly for the American market by Henri Stern, the manufacture’s former president. 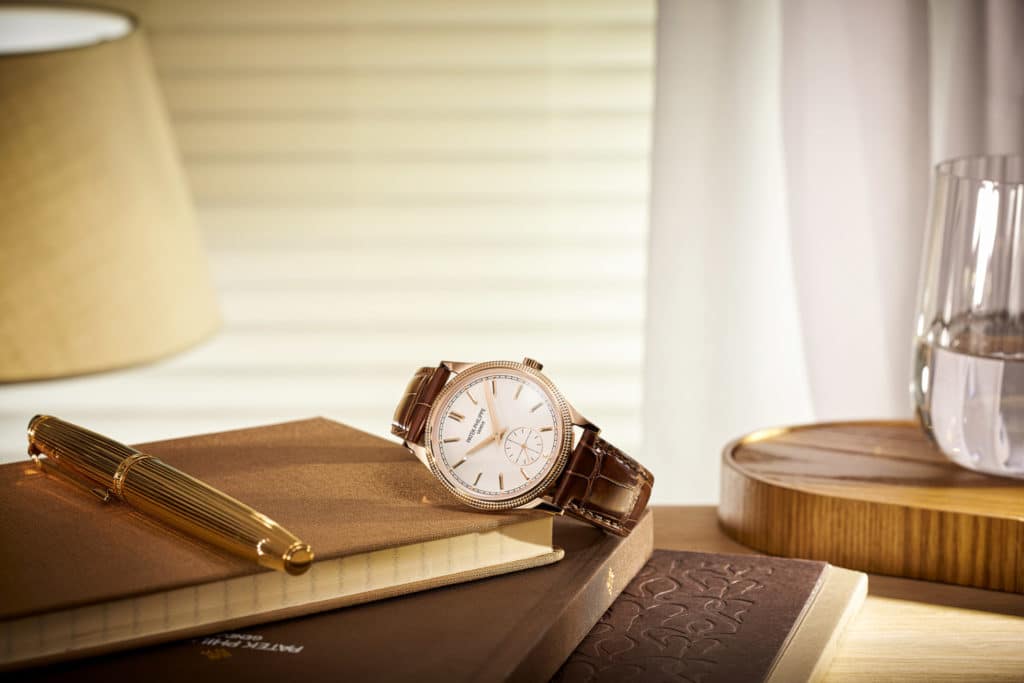 With the introduction of a totally new manually wound movement, the Ref. 6119 Calatrava “Clous de Paris” establishes a new milestone in the history of Patek Philippe’s most famous timepiece collection. Its launch gives Patek Philippe the opportunity to present a brand new base movement that enriches the broad range of manufacture calibers. Its development is based on the desire to have a manually wound movement with a larger diameter than the caliber 215 PS. It allows the creation of exceptionally slender cases as a prerequisite for timeless elegance.

The new caliber 30-255 PS of the Calatrava Clous de Paris has an inside case diameter of 30.4 mm (overall diameter 31 mm) as opposed to 21.5 mm for the 215 PS (overall diameter 21.9 mm) and an unchanged height of 2.55 mm as indicated by its designation. To preserve the height of 2.55 mm of the caliber 215 movement, the engineers and designers of the manufacture implemented several ingenious solutions, among them a central pinion without a wheel plate that meshes with the center wheel via an intermediate wheel as well as a ratchet wheel and a crown located beneath the barrel bridge instead of above it. Energetically, the caliber 30-255 PS performs a jump forward as well. It is exceptionally robust and powerful, delivering a power reserve of 65 hours or nearly three days. A special feature of the movement is its two mainspring barrels in a parallel arrangement. They relax together and engage with the central pinion in a configuration that is rarely used. In contrast to barrels connected in series to extend the power reserve, parallel barrels increase the torque of the movement by adding the torque of the two barrels. This solution supports maximum force despite the slender architecture and allows the deployment of a balance with twice the moment of inertia of 10 mg/cm2. It is the highest moment of inertia of all of Patek Philippe’s 4-Hz movements. It improves rate stability and simplifies the precision adjustment of the movement. The frequency of 4 hertz (28,000 semi-oscillations/hour) pursues the same objectives. Of course, the caliber 30-255 PS – with a maximum deviation of -3/+2 seconds in 24 hours – fulfills the extremely strict directives of the Patek Philippe Seal as regards rate accuracy. 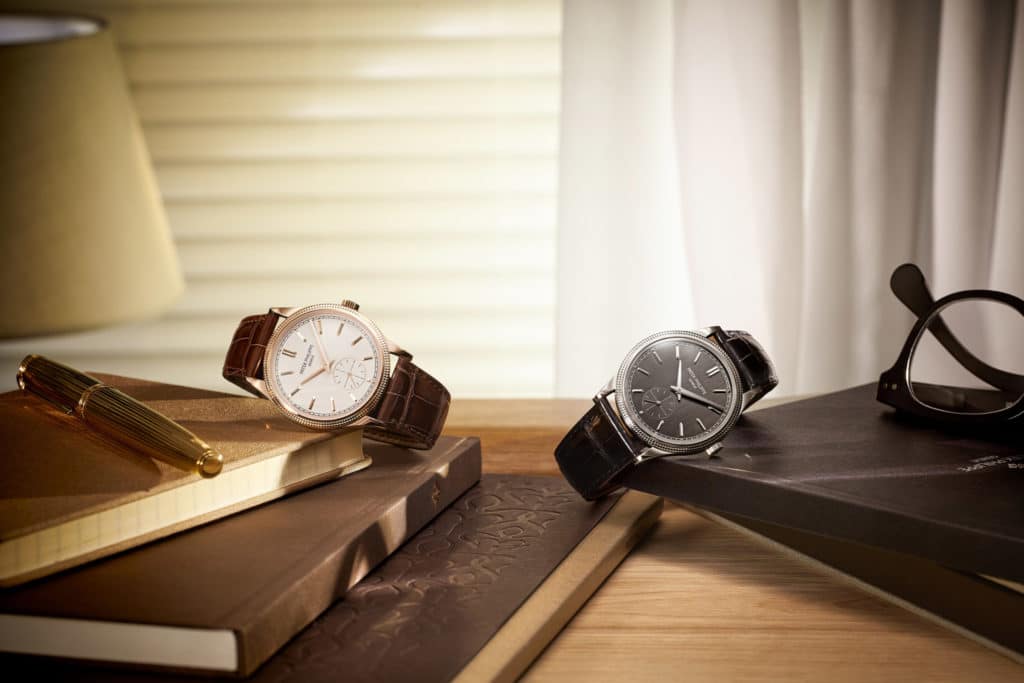 Also, the architecture of the new base movement was carefully aligned with ancestral traditions, according to which each wheel or every function has its own bridge. Behind the sapphire-crystal case back, the caliber 30-255 PS thus reveals six elegantly shaped bridges that are finished to the most exacting horological traditions. This includes Geneva striping as well as chamfered and polished edges. The new manually wound movement harmoniously pairs aesthetics and performance. It celebrates its debut in the Calatrava Ref. 6119 which is off to a good start into a promising future in the Patek Philippe collections

Check out all Patek Philippe models in stock on our online boutique. CLICK HERE