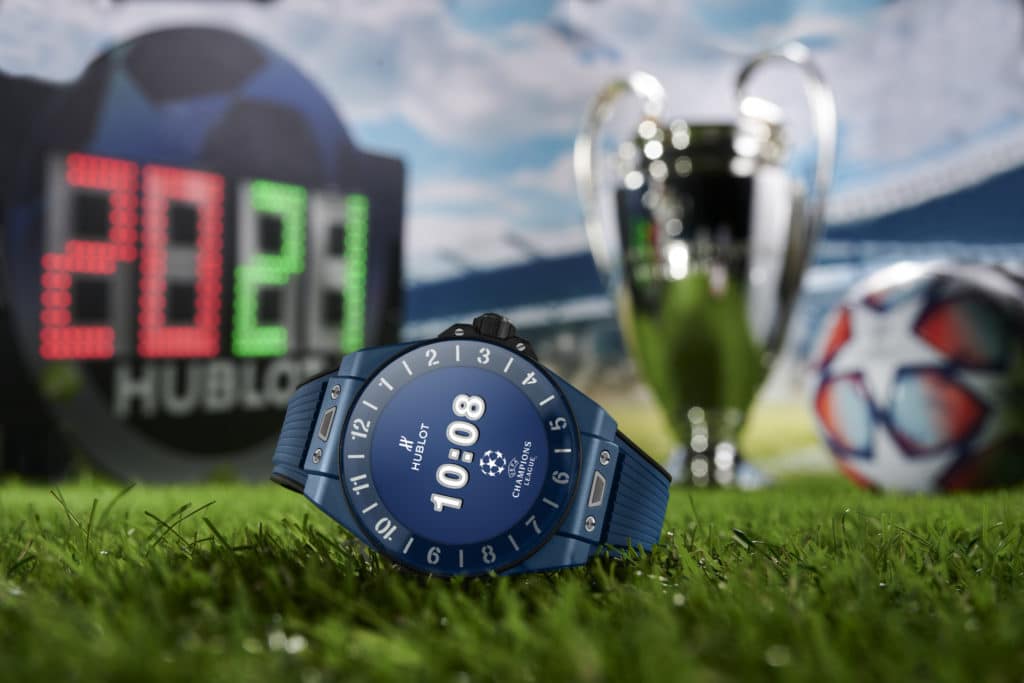 On the day of the draw for world football’s most prestigious club competition, Hublot announces a limited-edition version of the Big Bang e connected watch

Because of Covid-19, this has been a very difficult year for everybody, full of disruption. But the start of the UEFA Champions League gives football fans all over the world something to be excited about. Hublot is really proud to be working with UEFA and to be involved in this wonderful competition. We’ve worked hard to create these special watches for fans, and we know they will make the UEFA Champions League experience even more memorable. Ricardo Guadalupe  – CEO of HUBLOT 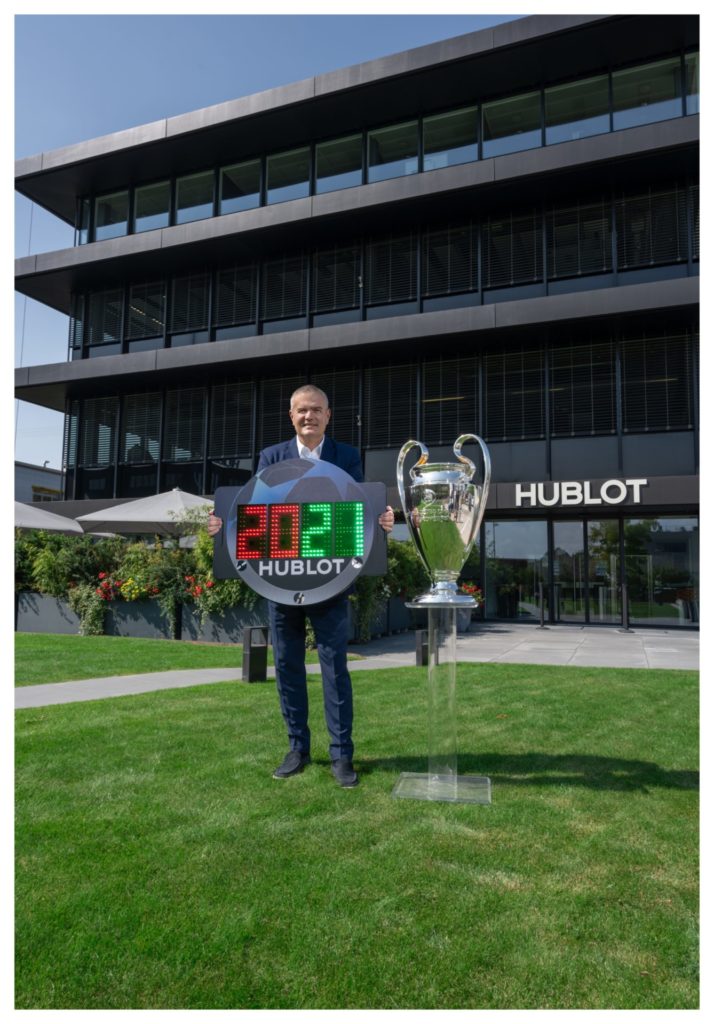 The new watch is based on the Hublot Big Bang e connected watch launched earlier this year, with a number of additional features that enrich the UEFA Champions League fan experience.

The 500-piece limited edition’s lightweight ceramic case and rubber bracelet are both in UEFA Champions League core blue. Owners will have various dials to choose from, downloadable from the Hublot Store. There are blue digital and analogue options, and a special color-dial that can be customised to match one of the participating team’s kit colours.

The watch is powered by Wear OS by GoogleTM and comes loaded with the new Hublot Loves Football UEFA Champions League app. The user will get notifications to alert them to kick-off times (15 minutes before the game starts), goals, penalty, substitutions, yellow and red cards and time added on. The app will also show team line-ups and VAR decisions, and then when it signals that the game is over, it will also begin a countdown to the next fixture. If there are two games taking place at the same time, users will be able to switch between them with a simple screen tap. The app will be also available to existing owners of the Hublot Big Bang e.

Hublot will also be equipping UEFA Champions League referees with a special version of the watch, which will not be made commercially available. Cast in a super-lightweight composite, it will be even lighter than the ceramic version. 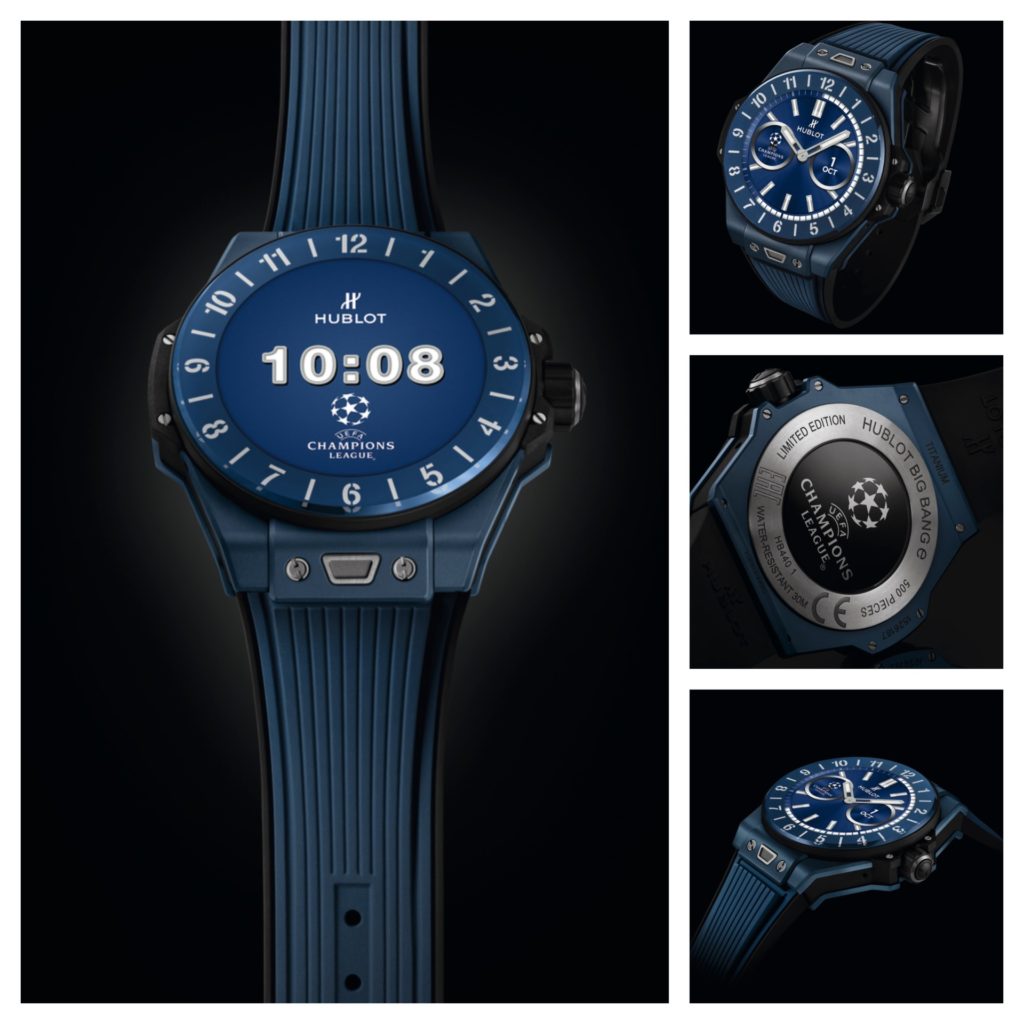 Hublot is the number one luxury company in world football. The company was the first Swiss watch brand and first luxury brand to get involved in football, and the first Swiss watch brand to create a luxury connected football watch for the 2018 FIFA Football World CupTM in Russia. Since it entered football in 2006, Hublot has timed dozens of domestic, European and international football competitions. This season, Hublot is also the Premier League’s Official Timekeeper for the first time, and next year it will time the UEFA European Championships, which have been rescheduled because of the pandemic, but will still be known as UEFA EURO 2020TM.

Founded in Switzerland in 1980, HUBLOT is defined by its innovative concept, which began with the highly original combination of gold and rubber. This “Art of Fusion” stems from the imagination of its visionary Chairman, JeanClaude Biver, and has been driven forward by CEO Ricardo Guadalupe since 2012.
The release of the iconic, multi-award-winning Big Bang in 2005 paved the way for new flagship collections (Classic Fusion, Spirit of Big Bang), with complications ranging from the simple to the highly sophisticated, establishing the extraordinary DNA of the Swiss watchmaking house and ensuring its impressive growth.
Keen to preserve its traditional and cutting-edge expertise, and guided by its philosophy to “Be First, Different and Unique”, the Swiss watchmaker is consistently ahead of the curve, through its innovations in materials (scratchresistant Magic Gold, ceramics in vibrant colours, sapphire), and the creation of Manufacture movements (Unico, Meca-10, Tourbillon).
HUBLOT is fully committed to creating a Haute Horlogerie brand with a visionary future: a future which is fused with the key events and brands of our times (FIFA World CupTM, UEFA Champions LeagueTM, UEFA EUROTM and Ferrari) and the finest ambassadors our era has to offer (Kylian Mbappé, Usain Bolt, Pelé).

Check out all Hublot watches in stock on our Edwards Lowell online boutique. CLICK HERE