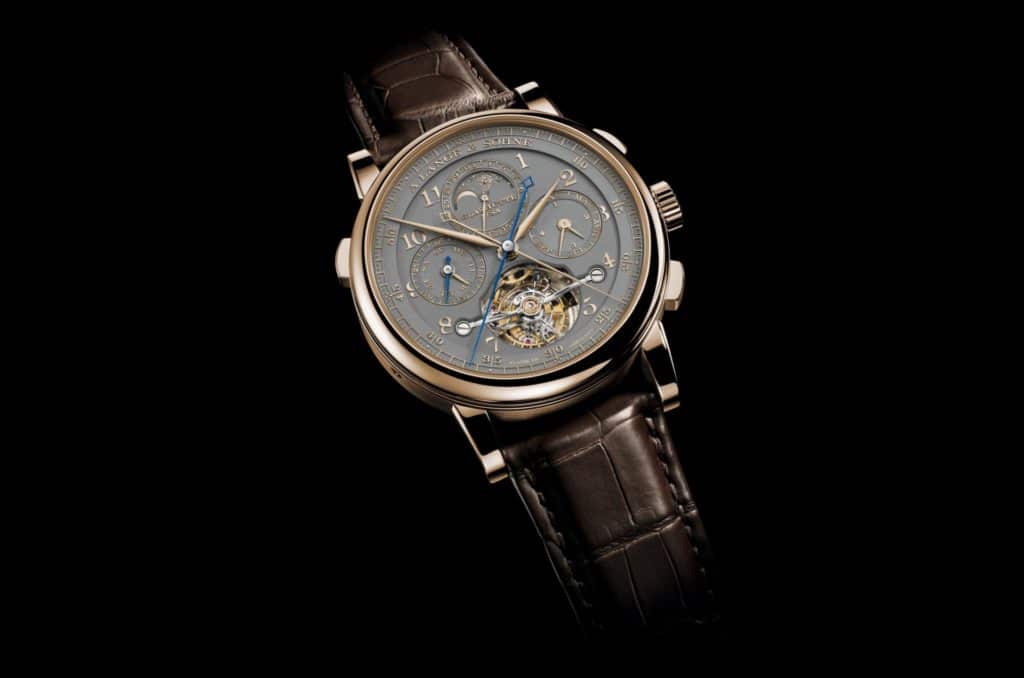 Like no other watch, this special model shows how A. Lange & Söhne has evolved the tradition of precision watchmaking and repeatedly infused it with fresh momentum. Five classic complications are combined in a unique masterpiece of technology called TOURBOGRAPH PERPETUAL “Pour le Mérite”, introduced in 2017. As a tribute to Ferdinand Adolph Lange, a limited special edition in honey gold is now debuting with a blackrhodiumed dial made of the same material. 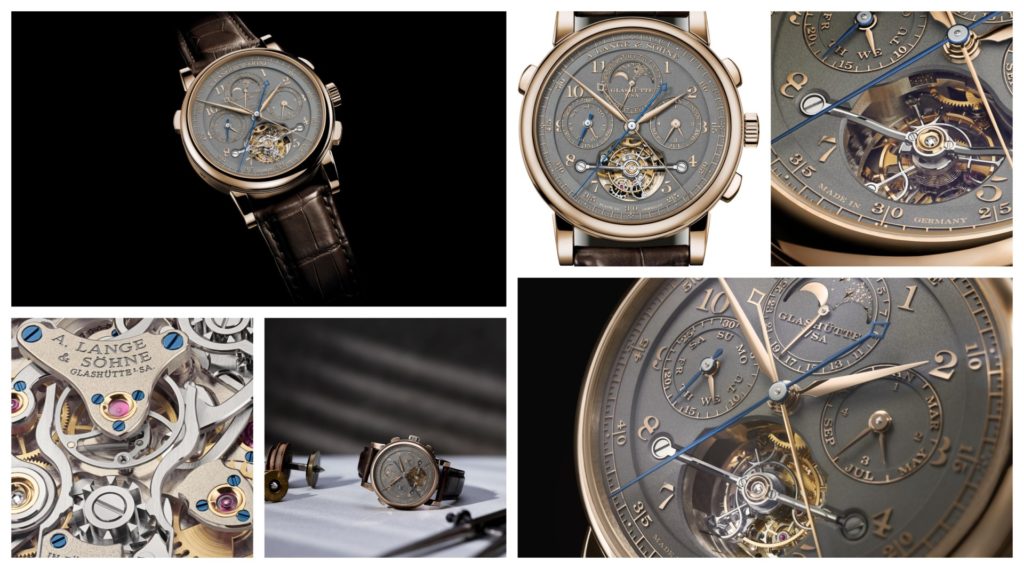 The brave decision of Ferdinand Adolph Lange to establish his first pocket watch workshop in the Ore Mountain town of Glashütte on 7 December 1845 marks the birth of Saxon precision watchmaking. A. Lange & Söhne is now commemorating the event with a “Homage to F. A. Lange” collection. It consists of three limited-edition models from the 1815 watch family – the 1815 RATTRAPANTE HONEYGOLD, the 1815 THIN HONEYGOLD and the TOURBOGRAPH PERPETUAL HONEYGOLD. The third model is limited to 50 pieces and introduces the combination of a fusée-and-chain transmission, a tourbillon, a rattrapante chronograph and a perpetual calendar, which was realised for the first time in 2017, and a novel dial and exclusive movement finissage.

With the dial of the TOURBOGRAPH PERPETUAL HONEYGOLD “Homage to F. A. Lange”, A. Lange & Söhne has taken a totally new approach. It is black-rhodiumed and, like the 43millimetre case, consists of solid, 18-carat honey gold. The raised numerals and scales as well as the logo contrast vividly against the dark background. They are not applied and instead are raised from the material by about 0.15 millimetres. In combination with the relief, this creates an incomparable three-dimensional effect.

The hands of the time and calendar displays as well as the black-rhodiumed lunar disc are made of the same gold alloy. Its two glistening, slightly cambered moons are framed by handengraved stars. The dial and the lunar discs are crafted in-house to assure the perfect implementation of the innovative design idea.

With calibre L133.1, the TOURBOGRAPH PERPETUAL HONEYGOLD “Homage to F. A. Lange” is endowed with a movement of peerless complexity; it consists of 684 parts. It fully complies with the rules of classic precision watchmaking with design details such as columnwheel control for the rattrapante chronograph, the screw balance, and its artisanal finissage. It would be legitimate to call this watch a grand complication. However, a masterpiece with this name already exists at A. Lange & Söhne: the GRAND COMPLICATION with a total of seven horological complications. It was released in 2013 and crafted only six times.

A quintet of complications

When it was introduced in 2017, the TOURBOGRAPH PERPETUAL “Pour le Mérite” was among the highlights at the SIHH salon in Geneva. The combination of five complications in this arrangement is unique. As long ago as 2005, A. Lange & Söhne had already created a watch with a fusée-and-chain transmission, a tourbillon, and a rattrapante chronograph: the TOURBOGRAPH “Pour le Mérite”. But the addition of a perpetual calendar required more than 200 extra parts, dramatically changing the power flows in the movement and requiring a new design concept.

With analogue displays, the perpetual calendar indicates all month durations correctly until 2100. After a one-time correction, the calendar is then properly calibrated for the next century. It has three subsidiary dials. The date at twelve o’clock and the day at nine o’clock are indicated with honey-gold hands. The month and leap year are both displayed at three o’clock. The upper half of the analogue date accommodates the moon-phase display which is calculated at an accuracy of 122.6 years.

The connection between the perpetual calendar and the rattrapante chronograph posed a special challenge for the engineers. This is because when both the chronograph function is used and the calendar displays switch, mechanical conflicts must be avoided alongside amplitude fluctuations that could have a negative impact on rate stability. Here, A. Lange & Söhne was able to benefit from its many years of experience in the development of highly complex chronographs. The top-mounted rattrapante (or split-seconds) hand in blued steel can be stopped independently of the gold-plated chronograph hand and also resynchronised with it via the pusher at ten o’clock. This allows any number of lap times to be stopped during a running time measurement. The mechanical switching processes are controlled with two column wheels and can be observed in real time through the sapphire-crystal caseback. The 30-minute-counter at nine o’clock completes the repertoire of chronograph displays.

With their carefully orchestrated interaction, the tourbillon and the fusée-and-chain transmission minimise two unavoidable physical phenomena that are common in all mechanical watches: gravity and the waning force of the mainspring. In 1994, A. Lange & Söhne succeeded for the first time in integrating a fusée-and-chain transmission in the compact dimensions of a wristwatch. Via a fusée connected to the spring barrel with a chain, the power of the mainspring is delivered to the movement with constant force thanks to the ingenious way in which the principle of levers is harnessed. A planetary gearing mechanism inside the fusée assures that the flow of power from the mainspring barrel to the escapement is not interrupted while the watch is being wound.

The special finissage of the calibre L133.1 was produced with a great artisanal effort and distinguishes itself from the first generation in essential details. The surfaces of the German-silver bridges and cocks are granularly textured and endowed with black-rhodiumed inscriptions. The filigreed lines of the manually engraved chronograph bridge are black-rhodiumed as well. This increases the three-dimensional effect of the pattern as well as the modernity of the traditional technique.

The artisanal decoration also includes the straight graining on the chain. The black polish on several areas of the curved tourbillon bridge challenges the skills of the finissage experts to the utmost. The tourbillon cage is suspended between two diamond endstones as was the case in Ferdinand Adolph Lange’s historic pocket watches of the then highest quality level, the 1A category. Other technical details of that category included a balance wheel with gold poising screws and screwed gold chatons to secure the bearing jewels. To top it off, a diamond endstone was integrated in the hand-engraved balance cock. When reincorporating the company, Walter Lange and Günter Blümlein adopted numerous 1A quality criteria in the new product philosophy to build a bridge between tradition and modernity.