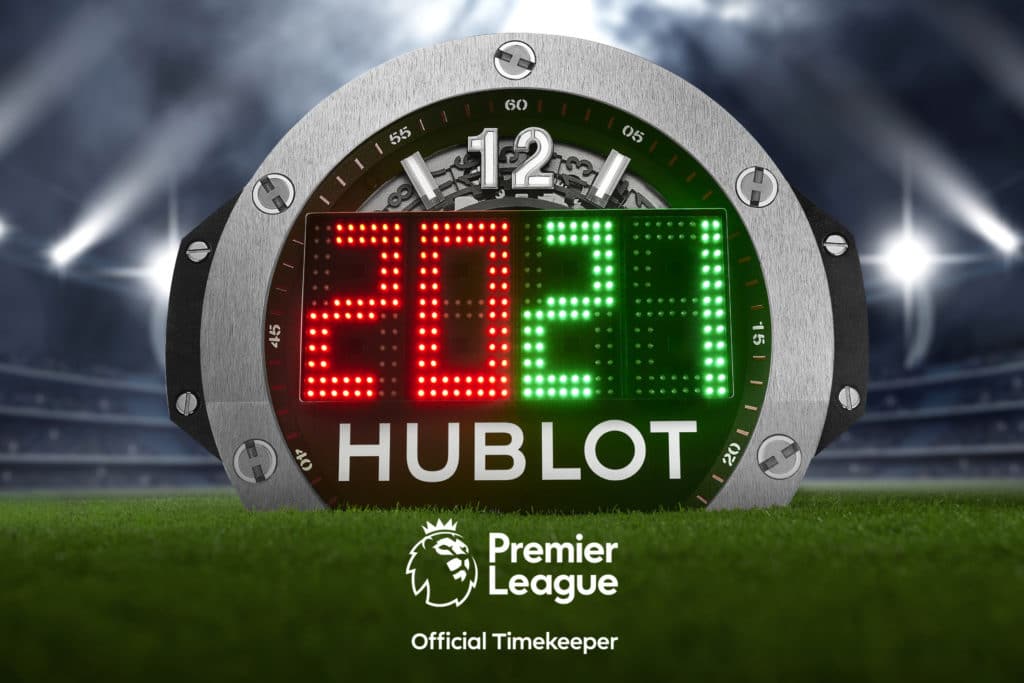 Hublot is thrilled to announce it will become the Premier League’s Official Timekeeper from the start of the 2020/21 season. Hublot Loves Football!

Hublot’s historical and now ubiquitous presence in football makes it a perfect partner for the Premier League, which attracts many of the world’s best players and most decorated managers, and is enjoyed by fans around the globe.

Matches featuring the 20 teams are available to watch in 880 million households in 188 of the world’s 193 countries recognized by the United Nations. According to research company Nielsen Sports, the Premier League has a cumulative global audience of 3.2 billion, making it the world’s most-watched football league. 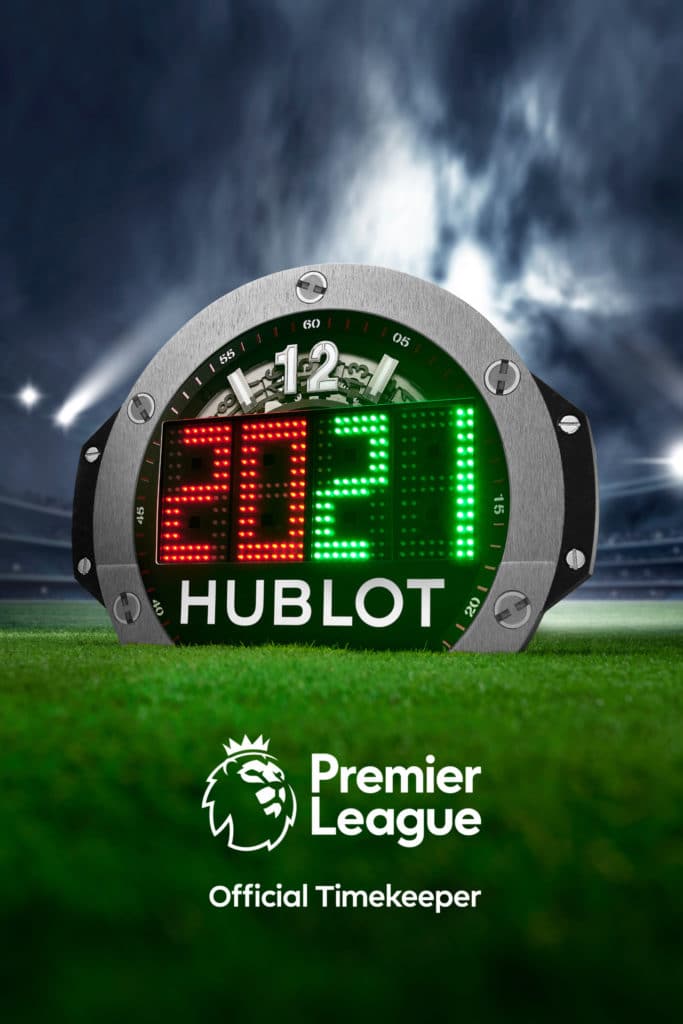 Not only was Hublot the first luxury brand to invest in football by partnering with the Swiss National Team in 2006, but now the company has one of the largest portfolios throughout the sport. Hublot’s partnerships cover international, European, national, women’s and club competitions, as well as legendary players and managers. This includes iconic competitions, clubs and figures such as the FIFA World Cup™, UEFA EURO (Men’s and Women’s), UEFA Champions League (Men’s and Women’s) and Europa League, Chelsea FC, Juventus FC, SL Benfica, AFC Ajax, as well as living legends such as Pelé, Maradona, Kylian Mbappé, Didier Deschamps, José Mourinho and Alex Morgan.

We are extremely excited and proud to become the Premier League’s Official Timekeeper. This is a milestone moment for Hublot. Since 2006, we have shown Hublot is hugely passionate about football and that we add great value to every competition, club and talent with whom we partner. We look forward to working together to bring this partnership to life on and off the pitch. Hublot Loves Football and our partnership with the Premier League is the proof! 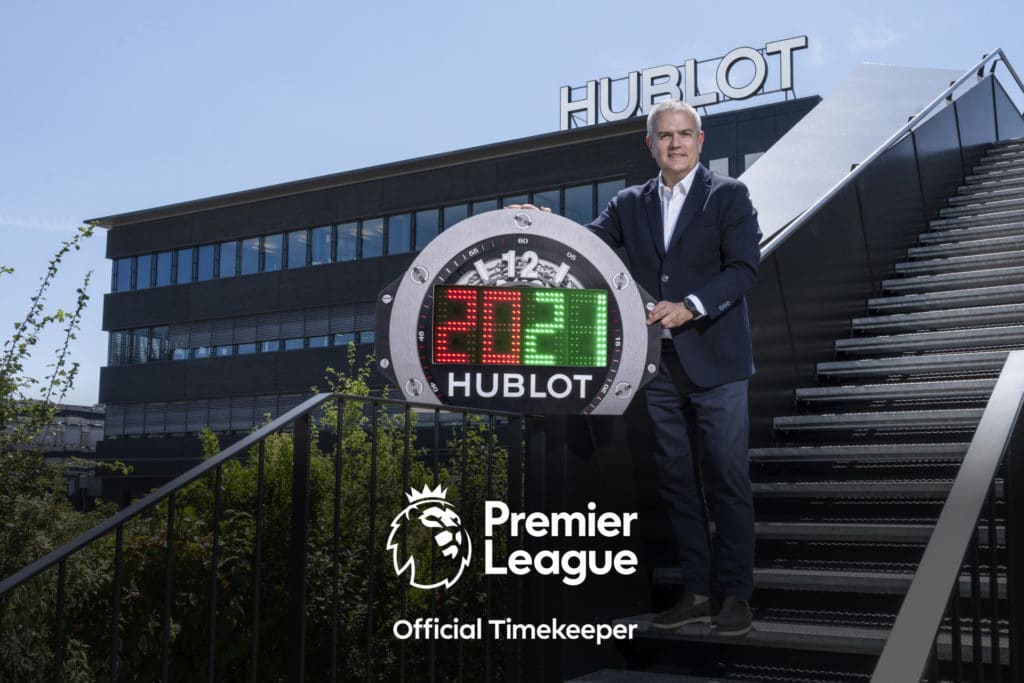 As Official Timekeeper for the League, Hublot will time every match pitch-side and on TV screens all over the world. The Hublot logo will sit alongside the on-screen graphic showing the match score and time. The Swiss luxury watch company will also be represented at every game via the iconic Hublot Big Bang Unico-shaped Referee Board held up by the fourth official to signal extra time and substitutions. Premier League referees will also time matches using a Hublot Big Bang luxury smartwatch, which includes goal-line technology. Between matches, Hublot will feature on all of the Premier League’s digital platforms.

We are delighted to welcome Hublot as the Premier League’s Official Timekeeper. Hublot brings a wealth of experience in sports timekeeping, particularly in football, and are renowned for being at the forefront of innovation. We look forward to working closely together and developing the partnership to bring exciting matchday and digital activations to fans around the world.

Following a very successful four-year partnership with the Premier League, TAG Heuer is gradually refocusing its investments on its core areas of sponsorship: motor sports and speed and precision sports. However, the Premier League is a fantastic platform which will further enhance Hublot’s already impressive football portfolio, and we are delighted to be able to retain this important partnership within the LVMH Watchmaking Division.

Founded in Switzerland in 1980, HUBLOT is defined by its innovation, which began with the highly original combination of gold and rubber. This “Art of Fusion” stems from the imagination of its visionary Chairman, Jean-Claude Biver, and has been driven forward by CEO Ricardo Guadalupe since 2012. The release of the iconic, multi-award-winning Big Bang in 2005 paved the way for new flagship collections (Classic Fusion, Spirit of Big Bang), with complications ranging from the simple to the highly sophisticated, establishing the extraordinary DNA of the Swiss watchmaking house and ensuring its impressive growth. Keen to preserve its traditional and cutting-edge expertise, and guided by its philosophy to “Be First, Different and Unique”, the Swiss watchmaker is consistently ahead of the curve, through its innovations in materials (scratch-resistant Magic Gold, ceramics in vibrant colours, sapphire), and the creation of Manufacture movements (Unico, Meca-10, Tourbillon). HUBLOT is fully committed to creating a Haute Horlogerie brand with a visionary future: a future which is fused with the key events of our times (FIFA World CupTM, UEFA Champions LeagueTM, UEFA EUROTM and Ferrari) and the finest ambassadors our era has to offer (Kylian Mbappé, Usain Bolt, Pelé).

The Premier League produces some of the most competitive and compelling football in the world. The League and its clubs use the power and popularity of the competition to inspire fans, communities, and partners in the UK and across the world. The Premier League brings people together from all backgrounds. It is a competition for everyone, everywhere and is available to watch in 880 million homes in 188 countries.