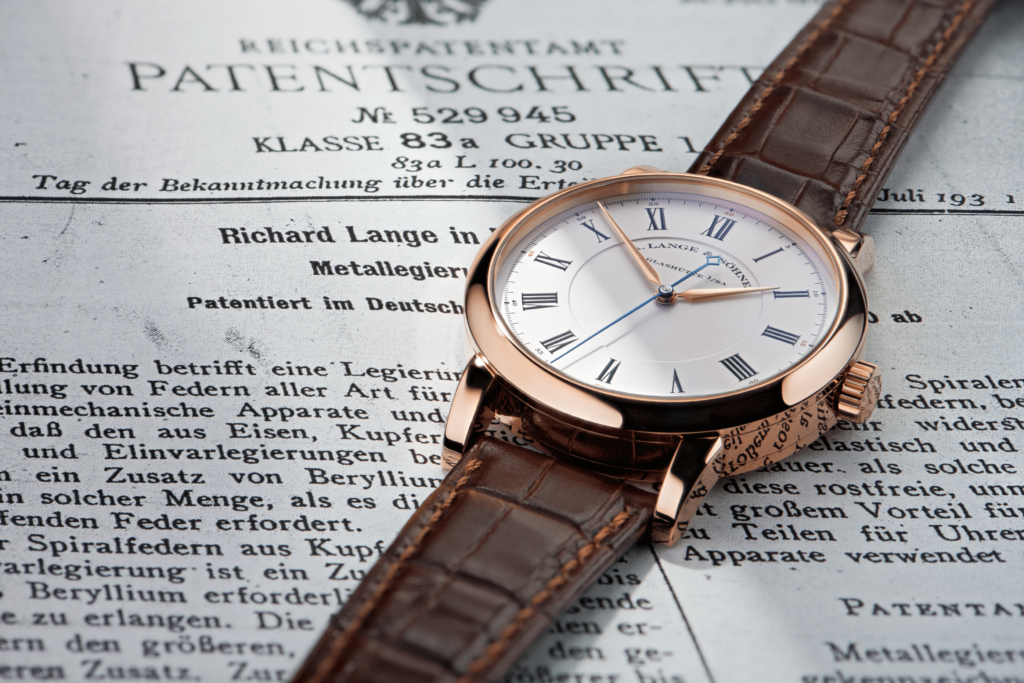 Richard Lange filed his presumably most important patent 90 years ago

The watch family Richard Lange bears the name of Ferdinand Adolph Lange’s firstborn son. Through his numerous inventions, research projects and patents, Richard Lange contributed significantly to the fame of Glashütte’s fine watchmaking. One of his most noteworthy achievements was probably the discovery that adding beryllium optimises both the hardness and elasticity of watch springs, for which he filed the patent 90 years ago.

For connoisseurs and enthusiasts, the special fascination of Glashütte’s fine watchmaking is constituted in the precision and precisely calculated proportions, which lend the fine timepieces their harmonious and elegant appearance. From the numerals and indices to the hands and indications and the case with the bezel, strap and buckle – the aura of every A. Lange & Söhne wristwatch results from the perfect interaction of its details, of which many are barely visible. 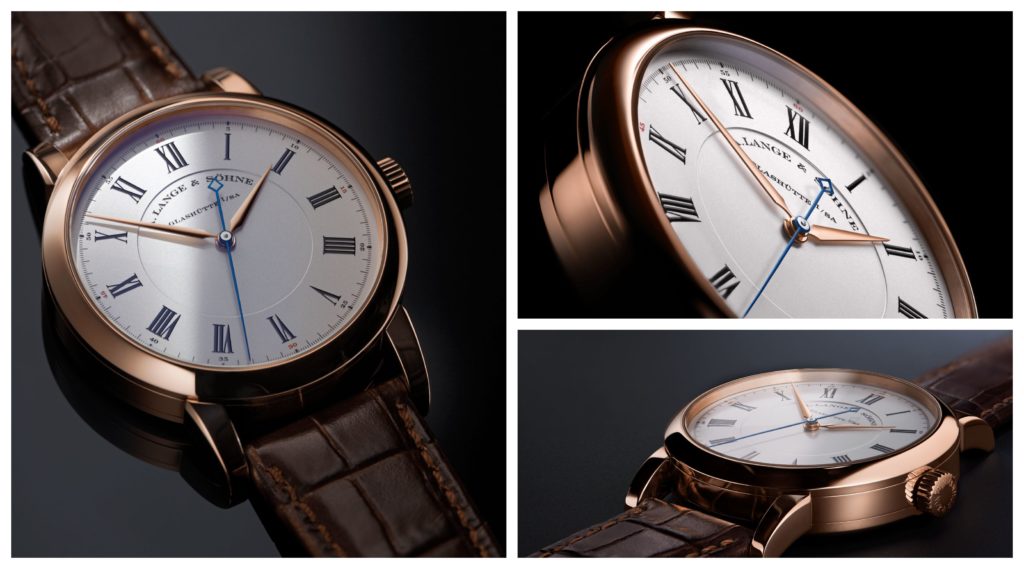 The fine mechanical microcosm inside is also designed in fractions of millimetres. Behind the sapphire-crystal case back, where a myriad of tiny components come together in perfect harmony, it reflects the outer perfection like a second face. For instance, the L041.2 calibre of the RICHARD LANGE in pink gold comprises 199 parts, while 279 combine in the L044.1 calibre of the white-gold RICHARD LANGE “Pour le Mérite” with a black dial – although its hand-assembled chain, which is made up of 636 individual components, is only counted as one part.

Each of these components, some of them barely visible to the naked eye, reliably fulfil their functions every second – for years and decades to come. The balance spring, or hairspring, is the heart of this mechanical masterpiece and as such directly responsible for its rate accuracy.

Made of a temperature-compensating alloy, it causes the balance wheel, the heart of every mechanical watch, to oscillate and is therefore crucial for the accuracy of operation. Its measurements require a good imagination: the tiny powerhouse has a thickness of only up to three-hundredths of a millimetre and weighs a mere 2.5 milligrams. It is hard to imagine: if the thickness variation of the wire during production differs only by 0.001 millimetres, this inaccuracy will cause the watch to be off by about 30 minutes per day.

Elaborate, demanding and very rare: the manufacturing process of the balance spring

Today, the in-house production of balance springs represents the cutting edge. Only a few watchmaking companies worldwide have mastered the traditional manufacturing process, during which an ultra-thin spring is formed from a metal wire with a diameter of 0.5 millimetres.

Since 2003, A. Lange & Söhne has belonged to this small circle. Ten years of development went into the time-consuming manufacturing process of this element, which is so essential for the watch’s accuracy. Today, the manufactory is able to fabricate individual balance springs for each calibre, which are optimally designed to meet their requirements. In doing so, the experts determine the appropriate number of windings as well as the correct diameter and ultimately define the optimal final curve. 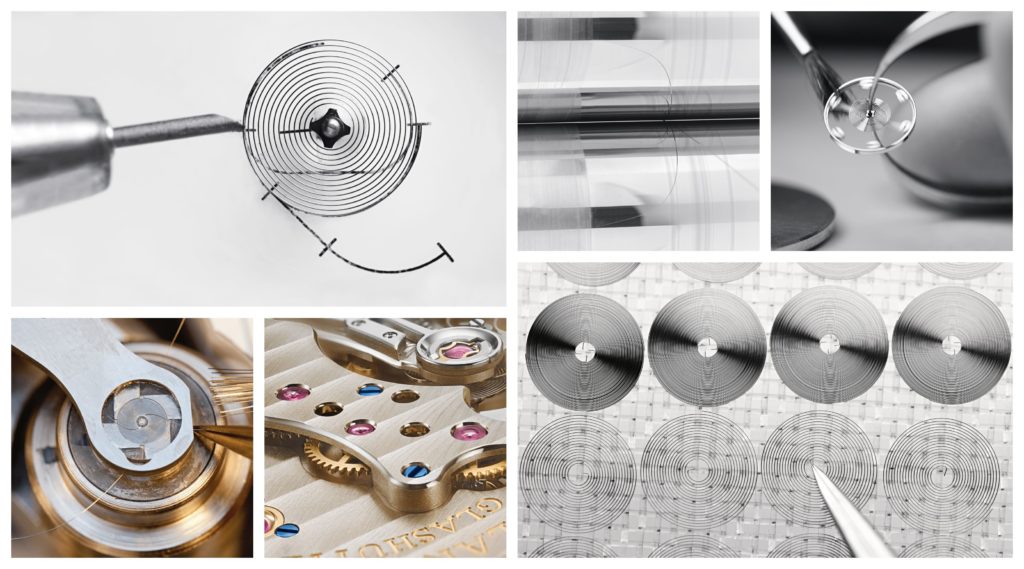 These calculations are among the most demanding tasks in watchmaking. Here, precision is also taken to extremes: the rate is ten-thousandths of a millimetre. With the help of a specially developed rolling process – rolls of this type are not commercially available – the fine wire’s thickness of about 0.025 millimetres is achieved.

However, the fabrication of the balance spring is not only complex in terms of process engineering – the material is crucial to achieve optimal oscillation.

Richard Lange, the eldest son of Ferdinand Adolph Lange, was a luminary in the field of materials science and probably the most inventive mind of the Lange watchmaking dynasty. He and his brother Emil took over the helm of the family business after their father’s death in 1875. While Emil took charge of commercial affairs, Richard was responsible for technical supervision. Numerous patents testify to his expert skills. Health reasons caused him to leave the company twelve years later. 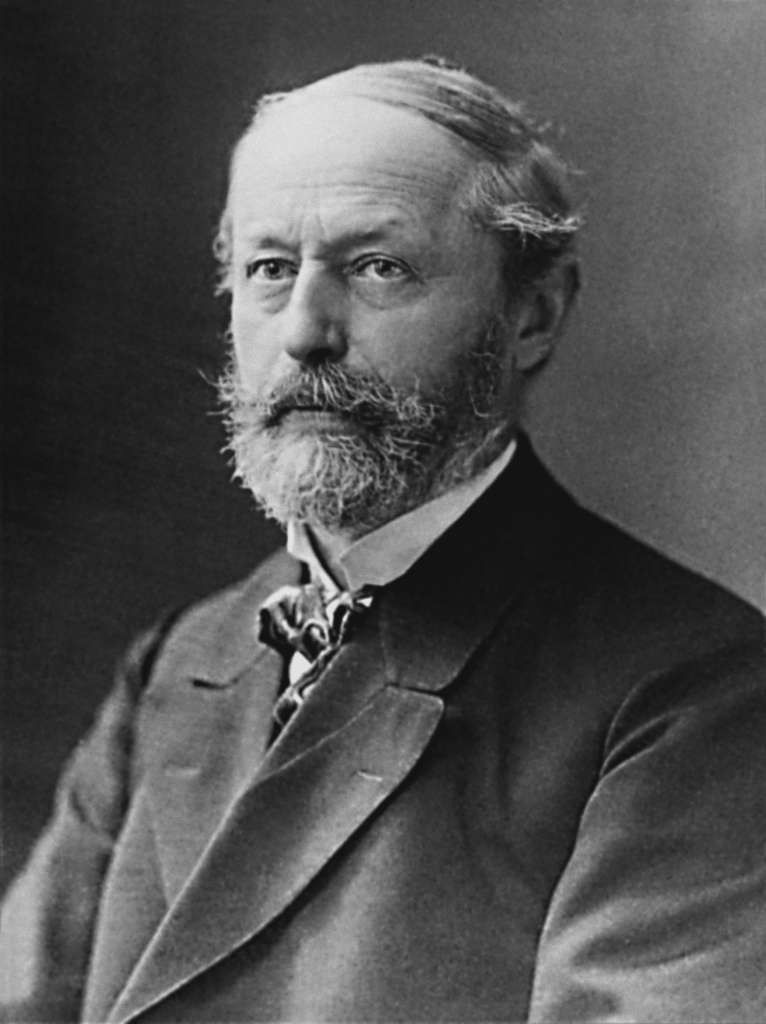 However, he continued to work tirelessly in the background as a freelancer, writer and inventor. In particular, he dealt intensively with scientific questions in the field of watch precision and studied research works from other disciplines – always striving to improve the accuracy and rate performance of pocket watches. Richard studied, researched and designed until his old age – many other patents are testament to his inexhaustible ingenuity.

Material science: the key to precision

In 1930, he defined what he considered the most suitable composition for balance springs under the title “Metal Alloy for Watch Springs”. Following his recommendations, beryllium is still added to the alloy today. The introduction of the nickel-steel balance, initiated by his brother Emil shortly after the turn of the century, had already made him aware of the important role of metallurgy in the field of oscillation systems. It was a publication of the steel tycoons Krupp and Siemens, which dealt with nickel-iron alloys in the late 1920s, that caught his attention.

In a 60-page research paper, Siemens engineers Georg Masing and Otto Dahl discussed the subject of beryllium-nickel alloys, coming to the conclusion that adding a small amount of beryllium increases elasticity. Richard saw the great potential that this discovery also offered for the watch industry. Thanks to its special properties, beryllium was predestined to improve both the elasticity and the hardness of the elinvar spring.

Richard immediately applied for a patent with the number 529945 at the German patent office. The independent patent, issued on 19 February 1930 reads as follows: “Metal alloy for watch springs, characterised by the addition of 1% to 2/2.5% of beryllium to the alloy, which is made of iron, copper, nickel, Invar and elinvar. Up to 6% of beryllium is added to achieve higher hardness.” In doing so, Lange recognised and used the practical benefits of the research results even before Siemens.

Richard Lange died on 29 October 1932 at the age of 86. But his legacy is kept alive today in the watch family dedicated to him: the timepieces with the name RICHARD LANGE pay homage to the precision watch, to whose fame he had greatly contributed. With their high accuracy, superb readability, reliability, and robustness, the timepieces meet the very specifications that the inventor once defined.

Dresden watchmaker Ferdinand Adolph Lange laid the cornerstone of Saxony’s precision watchmaking industry when he established his manufactory in 1845. His precious pocket watches remain highly coveted among collectors all over the world. The company was expropriated after World War II, and the name A. Lange & Söhne nearly vanished. In 1990, Ferdinand Adolph Lange’s great-grandson Walter Lange had the courage to relaunch the brand. Today, Lange crafts only a few thousand wristwatches per year, predominantly in gold or platinum. They are endowed exclusively with proprietary movements that are lavishly decorated by hand and assembled twice. With 64 manufacture calibres developed since 1994, A. Lange & Söhne has secured a top-tier position in the world of watchmaking. Brand icons such as the LANGE 1 with the first outsize date in a regularly produced wristwatch, and the ZEITWERK with its precisely jumping numerals display, rank among the company’s greatest successes. Exceptional complications such as the ZEITWERK MINUTE REPEATER, the TRIPLE SPLIT, and the so far most complicated model, the GRAND COMPLICATION presented in 2013 in a six-watch limited edition, reflect the manufactory’s determination to achieve ever new pinnacles in its tradition-steeped horological artistry. Launched in 2019, the sporty-elegant ODYSSEUS marks the beginning of a new chapter for A. Lange & Söhne.