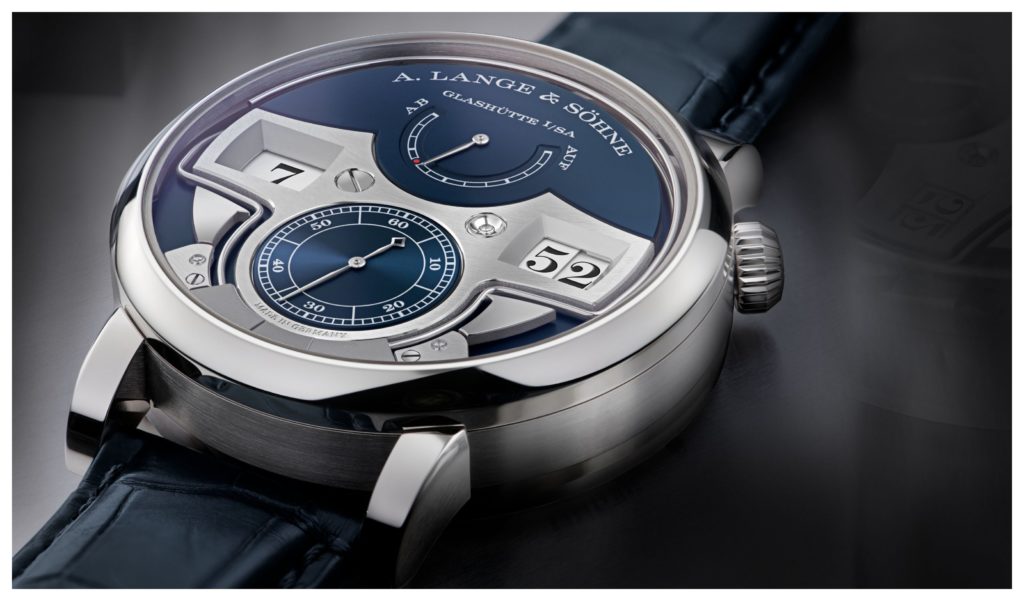 Presented in 2015, the ZEITWERK MINUTE REPEATER is the world’s only watch that combines a mechanical jumping numerals display with a decimal minute repeater. The complicated timepiece – its assembly alone requires several months – has so far been available only in platinum. Five years after its debut, it now comes in a limited 30-watch edition in white gold with a deep-blue dial.

The ZEITWERK MINUTE REPEATER features a totally new interpretation of the classic complication. Its striking mechanism – it sounds ten-minute intervals instead of quarter-hours with double strikes – is a convincing logical complement to the “digital” display of the time.

As soon as the striking mechanism is activated with the repeater pusher at 10 o’clock, it sounds the time as indicated on the dial. One hears what one sees. And one sees what one hears. At 7.52, for instance, the gong hammer on the left strikes the low-pitched gong seven times, once for every elapsed hour. Then, five double tones are struck for the elapsed ten-minute intervals, followed by the right-hand hammer with two high strikes, one for each elapsed minute. The polished gongs and the black-polished gong hammers are subtly integrated in the design of the dial.

In the development of the striking mechanism, Lange’s engineers relied on the basic principle of the jumping numerals mechanism with which the time is displayed by an hour ring and two minute discs. This configuration makes it possible to sample the number of strikes to be executed – separately for the hours, ten-minute intervals and minutes – directly on the snails that are connected to the mechanical display elements. At the same time, enlarged sampling surfaces enhance the reliability of the striking mechanism. This assures that the acoustic time always corresponds to the displayed time.

Pusher instead of slide

The ZEITWERK MINUTE REPEATER features a unique pusher mechanism for triggering the repeater. Because the power for the striking mechanism is delivered by the mainspring barrel, there is no need for a slide – common in minute repeaters – to tension a separate spring. The absence of a large lateral opening in the case eliminated a source of acoustic disruption, thus improving the sound quality. And since a pusher, unlike a slide, can be sealed, the ZEITWERK MINUTE REPEATER is water-resistant to as much as 3 bar.

To achieve the best possible sound quality, the product developers carefully reconciled all relevant parameters such as the case, gong hammers, gongs and movement architecture with one another. The large white-gold case delivers a reverberant, warm sound. The gongs, patiently tuned by hand, generate pure, resonant tones in perfect harmony.

The ZEITWERK MINUTE REPEATER stands out with a number of refined technical features that in particular optimise its operation.

Since a switching action could cause mechanical conflicts while the repeater is running, the numerals discs are prevented from incrementing until the repeater sequence has ended. This can take up to 20 seconds. The delay also assures that the digitally displayed time and the acoustic time are always the same. 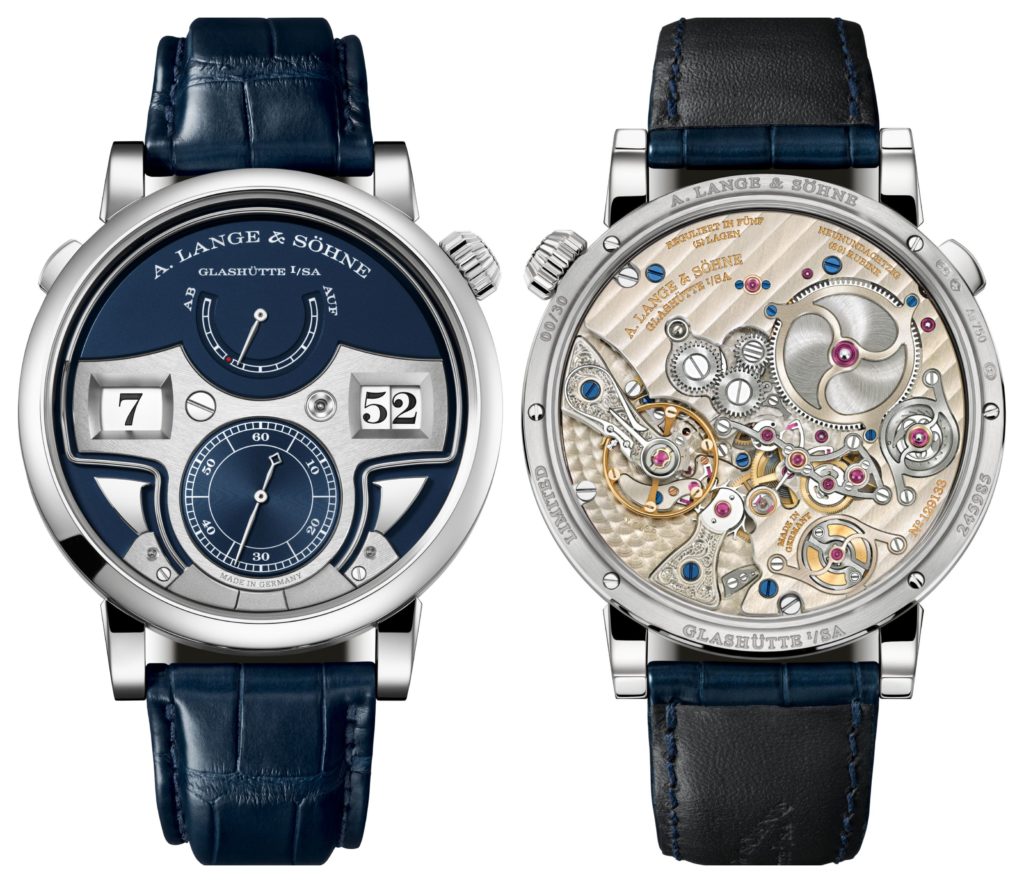 For the same reason, the crown cannot be pulled while the striking mechanism is active. The actuation of the repeater pusher uncouples the wheel train of the winder from the ratchet wheel that drives the striking mechanism. This prevents the wheel train of the winder, including the crown, from rotating during the repeater sequence, which would result in an unnecessary loss of energy.

Finally, when the power reserve drops to less than twelve hours, the striking mechanism can no longer be activated. This assures that the repeater sequence is always executed in full: The watch will not stop unexpectedly before the strike sequence has been completed. On the power- reserve indicator, the 12-hour mark is identified with a red dot.

With their precisely jumping numerals display, the ZEITWERK models stand for uncompromising purity of design. Consisting of three discs, the display module is arranged in such a way that the time, with large-format numerals, can be read from left to right in the natural way. With a gentle click and hardly discernible to the human eye, the patented jumping numerals mechanism advances from minute to minute until, at the top of the hour, all three numerals discs simultaneously jump forward by precisely one increment. An exceptionally strong mainspring is required to handle these switching actions. It is equally important to assure the controlled deceleration of the abruptly accelerated discs to rule out damage to the movement. This is done with a fly governor that absorbs excess energy after each switching sequence.

As all models of the ZEITWERK watch family, the ZEITWERK MINUTE REPEATER also features a patented constant-force escapement between the barrel and the balance that acts as a pacemaker for the instantaneous advance of the numerals discs in one-minute intervals. At the same time, it makes an important contribution to rate stability by assuring that the balance – regardless of the state of wind of the watch and despite energy-intensive switching processes – is powered with a consistent amount of force across the entire power-reserve duration.

Composed of 771 parts, the manufacture calibre L043.5 is completed by hand with extreme care and utmost patience. Of the 93 jewels, three are set in screwed gold chatons. The hand-engraved balance cock – the artistic signature of all Lange watches – was given a design complement: the escape-wheel cock engraved with the same motif.

Five years after its debut in 2015, the ZEITWERK MINUTE REPEATER now comes in a 44.2- millimetre white-gold case with a matching deployant. The deep-blue dial in solid silver contrasts beautifully against the rhodiumed German silver time bridge. A blue hand-stitched leather strap highlights the elegance of the timepiece. Limited to 30 watches, this edition is available exclusively in the 33 A. Lange & Söhne boutiques.

Dresden watchmaker Ferdinand Adolph Lange laid the cornerstone of Saxony’s precision watchmaking industry when he established his manufactory in 1845. His precious pocket watches remain highly coveted among collectors all over the world. The company was expropriated after World War II, and the name A. Lange & Söhne nearly vanished. In 1990, Ferdinand Adolph Lange’s great-grandson Walter Lange had the courage to relaunch the brand. Today, Lange crafts only a few thousand wristwatches per year, predominantly in gold or platinum. They are endowed exclusively with proprietary movements that are lavishly decorated by hand and assembled twice. With 64 manufacture calibres developed since 1994, A. Lange & Söhne has secured a top-tier position in the world of watchmaking. Brand icons such as the LANGE 1 with the first outsize date in a regularly produced wristwatch, and the ZEITWERK with its precisely jumping numerals display, rank among the company’s greatest successes. Exceptional complications such as the ZEITWERK MINUTE REPEATER, the TRIPLE SPLIT, and the so far most complicated model, the GRAND COMPLICATION presented in 2013 in a six-watch limited edition, reflect the manufactory’s determination to achieve ever new pinnacles in its tradition-steeped horological artistry. Launched in 2019, the sporty-elegant ODYSSEUS marks the beginning of a new chapter for A. Lange & Söhne.

Check out the full range of A. Lange & Söhne pieces at Edwards Lowell on our online boutique. CLICK HERE