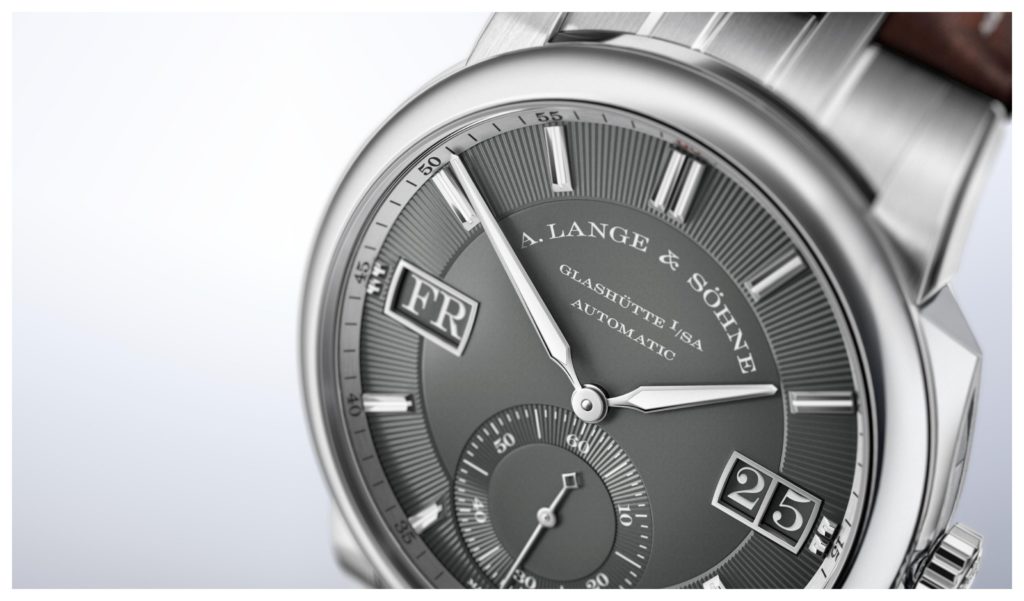 The latest A. Lange & Söhne watch family welcomes a sibling. The Lange ODYSSEUS now comes in white gold with an integrated rubber or leather strap. The sporty-elegant timepiece with the large-format date and day display and a water-resistant case features a grey dial with a special surface structure for a very textured effect.

When A. Lange & Söhne’s product developers come up with new ideas, they first have to answer a critical question: is it possible to integrate the concept into one of our existing product families? Or will it require a totally new approach? In some cases, this question is not easy to answer and different attempts are needed to find the best solution. This was the case with the ODYSSEUS. When it became clear that the combination of the iconic Lange outsize date in the classic double aperture with an equally large day display on the opposite side produced a distinctive design, the consensus was that this model would be the cornerstone for the sixth watch family at A. Lange & Söhne.

Launched on 24 October 2019, exactly 25 years to the day after the debut of the first new-era timepiece collection by Walter Lange and Günter Blümlein, it was obvious that the ODYSSEUS was designed for active people who wish to wear their Lange watch even in situations when a precision mechanical model would ordinarily be set aside. Its prominently sculpted design emphasises the dynamic personality of the watch.

The second model of the new family combines a 40.5-millimetre white-gold case with a grey dial. White-gold hands and notched baton appliques assure good legibility against the dark background. The numerals of the outsize date and the letters of the large-format day display stand out in white on grey. With a height of 2.4 millimetres, they are easily readable even in poor light conditions. Like the hour and minute hands, the hour markers are luminous. The embossed groove structure beneath the applied hour markers and the subsidiary seconds scale enhances the textured effect of the dial. It contrasts against the glossy matt inner surfaces of the main and subsidiary dials. The red 60 on the bevelled argenté-coloured flange ring with the printed minute scale provides a subtle colour accent.

The tapered buttons for correcting the day and the date are arranged above and beneath the crown. They accentuate the prominent shape of the three-part white-gold case. The finissage of the case and the lugs is characterised by the interplay of brushed surfaces and polished chamfers. Integrated straps are available in hand-stitched leather or black rubber. The latter features air ducts on the inside for superb wearing comfort.

The watch is powered by the L155.1 DATOMATIC manufacture calibre developed exclusively for the ODYSSEUS. Its name stands for the combination of a date mechanism and automatic winding. To guarantee high rate accuracy regardless of external factors, the balance operates at a frequency of 28,800 semi-oscillations per hour (4 hertz). Recessed poising screws minimise air turbulence that could affect the rate. The movement has a maximum power reserve of 50 hours. The skeletonised and partially black-rhodiumed central rotor with a centrifugal mass in platinum assures dependable energy delivery.

In line with Lange’s philosophy, all parts are lavishly hand-finished and the movement is assembled twice. Many artisanal details can be discovered with a glance through the sapphire- crystal caseback. They include the German silver plate decorated with Glashütte ribbing, the wave pattern engraved on the balance bridge, and the screwed gold chaton above the escape wheel.

Dresden watchmaker Ferdinand Adolph Lange laid the cornerstone of Saxony’s precision watchmaking industry when he established his manufactory in 1845. His precious pocket watches remain highly coveted among collectors all over the world. The company was expropriated after World War II, and the name A. Lange & Söhne nearly vanished. In 1990, Ferdinand Adolph Lange’s great-grandson Walter Lange had the courage to relaunch the brand. Today, Lange crafts only a few thousand wristwatches per year, predominantly in gold or platinum. They are endowed exclusively with proprietary movements that are lavishly decorated by hand and assembled twice. With 64 manufacture calibres developed since 1994, A. Lange & Söhne has secured a top-tier position in the world of watchmaking. Brand icons such as the LANGE 1 with the first outsize date in a regularly produced wristwatch, and the ZEITWERK with its precisely jumping numerals display, rank among the company’s greatest successes. Exceptional complications such as the ZEITWERK MINUTE REPEATER, the TRIPLE SPLIT, and the so far most complicated model, the GRAND COMPLICATION presented in 2013 in a six-watch limited edition, reflect the manufactory’s determination to achieve ever new pinnacles in its tradition-steeped horological artistry. Launched in 2019, the sporty-elegant ODYSSEUS marks the beginning of a new chapter for A. Lange & Söhne.

View all the A. Lange & Söhne pieces on stock on our Edwards Lowell online boutique – CLICK HERE