Scuderia Ferrari is celebrating the 90th year since its foundation in 1929. Hublot is marking the occasion with the BIG BANG SCUDERIA FERRARI 90th ANNIVERSARY watch, a new model that is available in three exclusive versions, produced in limited editions.

Scuderia Ferrari is the only organisation of its kind in the world as it is both a monument to motorsport and a modern racing team that is competitive and at the cutting-edge of technology. It embodies passion and values that Hublot shares every day. Happy birthday Scuderia, we look forward to sharing many more victories with our legendary partner!
Ricardo Guadalupe
CEO HUBLOT

To celebrate the 90th birthday of the most successful race team of all time, Hublot, which has been a long-standing partner of Scuderia Ferrari, is proud to present the Big Bang Scuderia Ferrari 90th Anniversary watch. This is a model that reflects the rich history and heritage of Scuderia Ferrari realized in three limited editions conceived in collaboration with the Ferrari Design Centre.

These pieces illustrate the development of the materials used in car racing over the years. This is a permanent quest of both companies, as illustrated by Hublot’s motto “The Art of Fusion”. No future and no victories without innovation. It is only through technical and technological research that the two houses have been able to maintain their respective positions in their respective worlds. The 45-mm-diameter of each of the three editions houses the famous UNICO movement, a flyback chronograph that offers a 72-hour power reserve. Their bezel is cut in ceramic carbon, the same material that is used for Formula 1 brake discs. 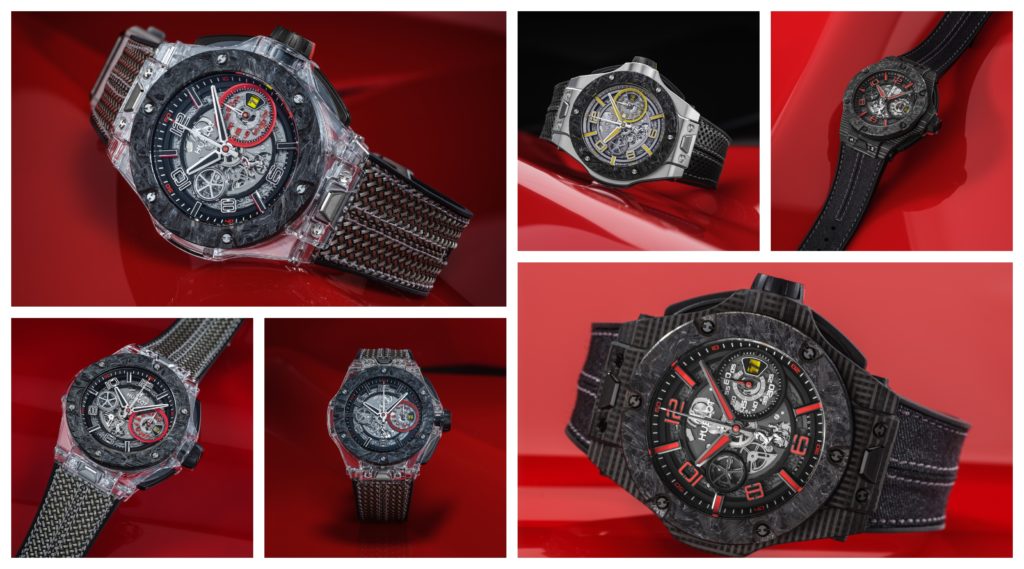 The first version is inspired by the early years of Scuderia Ferrari and its glorious past. The visible metal parts, the peccary leather from the bucket seats and the brushed look of the dashboard are represented here by the platinum case and the stitched perforated strap. Its dial evokes old-fashioned speedometers with its calendar underlined in yellow. In this way, it falls in-line with the purest traditions of car racing.

The 3D carbon that is used to make the case of the second edition reflects the present day Scuderia Ferrari. Today, research into new composite materials and high-technology are all powerful in competition driving. Its strap is made from Nomex—the fire-resistant synthetic fibre used to make racing driver’s suits—on which the red and black stitching makes a striking contrast. Its colour code is black and red, the colours currently used by Scuderia Ferrari for its single-seater Formula 1 cars.

The third model is instantly recognisable by its transparent case made from sapphire, an innovative materi-al that is hard to work, giving it a resolutely futuristic style. It demonstrates the extreme
sophistication that technology is heading towards and the possibilities it offers for the future. A promise of innovations that will apply to both car manufacture and watchmaking. Its strap adopts a highly futuristic Kevlar look.

Each of the three versions of the Hublot Big Bang Scuderia Ferrari 90th Anniversary watch bears one of the three colours of the Scuderia on its border, the numbers and the index. Yellow for the platinum edition, red for the 3D carbon edition and black for the sapphire edition. All three will be produced in a limited edition of 90, and 10 ‘collector’ sets with all three watches will also be available. A bit of history. Scuderia Ferrari came into being on 16th November 1929 in the offices of the notary, Della Fontana of Modena, the company established as the Società Anonima Scuderia Ferrari, with its headquarters in via Trento and Trieste. It was approved by the courts on 29th November and from that moment on the company was effectively operational. The directors of the company were Alfredo and Augusto Caniato, Enzo Ferrari and Ferruccio Testi. Alfa Romeo and Pirelli were also involved.

The team made its debut in the 1930 Mille Miglia and its first win came in the Trieste-Opicina on 15th June that same year, courtesy of the great Tazio Nuvolari. Motorcycles also featured in the Scuderia’s history, from 1932 to 1934 and 1932 marked the first appearance of the Prancing Horse as part of the livery of the Alfa Romeos entered by Ferrari. The symbol came from the family of war hero Francesco Baracca, the horse set on a shield with a yellow background, representing the colour of the city of Modena.

Its first win came in the Spa 24 Hours thanks to Antonio Brivio and Eugenio Siena. Starting off racing Alfa Romeo cars and then, from 1947, with cars built in-house, Scuderia Ferrari became the most successful race team of all time, taking thousands of wins in some of the most important races in the world. In Formula 1 alone, it has taken 16 Constructors’ titles and 15 Drivers’. In the world of endurance racing, Ferrari has nine victories to its name in the Le Mans 24 Hours, two at Daytona and five FIA WEC titles and has even been successful in rallying

Founded in Switzerland in 1980, HUBLOT is defined by its innovation, which began with the highly original combination of gold and rubber. This “Art of Fusion” stems from the imagination of its visionary Chairman, Jean-Claude Biver, and has been driven forward by CEO Ricardo Guadalupe since 2012. The release of the iconic, multi-award-winning Big Bang in 2005 paved the way for new flagship collections (Classic Fusion, Spirit of Big Bang), with complications ranging from the simple to the highly sophisticated, establishing the extraordinary DNA of the Swiss watchmaking house and ensuring its impressive growth.

Keen to preserve its traditional and cutting-edge expertise, and guided by its philosophy to “Be First, Different and Unique”, the Swiss watchmaker is consistently ahead of the curve, through its innovations in materials (scratch-resistant Magic Gold, ceramics in vibrant colours, sapphire), and the creation of Manufacture movements (Unico, Meca-10, Tourbillon). HUBLOT is fully committed to creating a Haute Horlogerie brand with a visionary future: a future which is fused with the key events of our times (FIFA World CupTM, UEFA Champions LeagueTM, UEFA
EUROTM and Ferrari) and the finest ambassadors our era has to offer (Kylian Mbappé, Usain Bolt, Pelé).