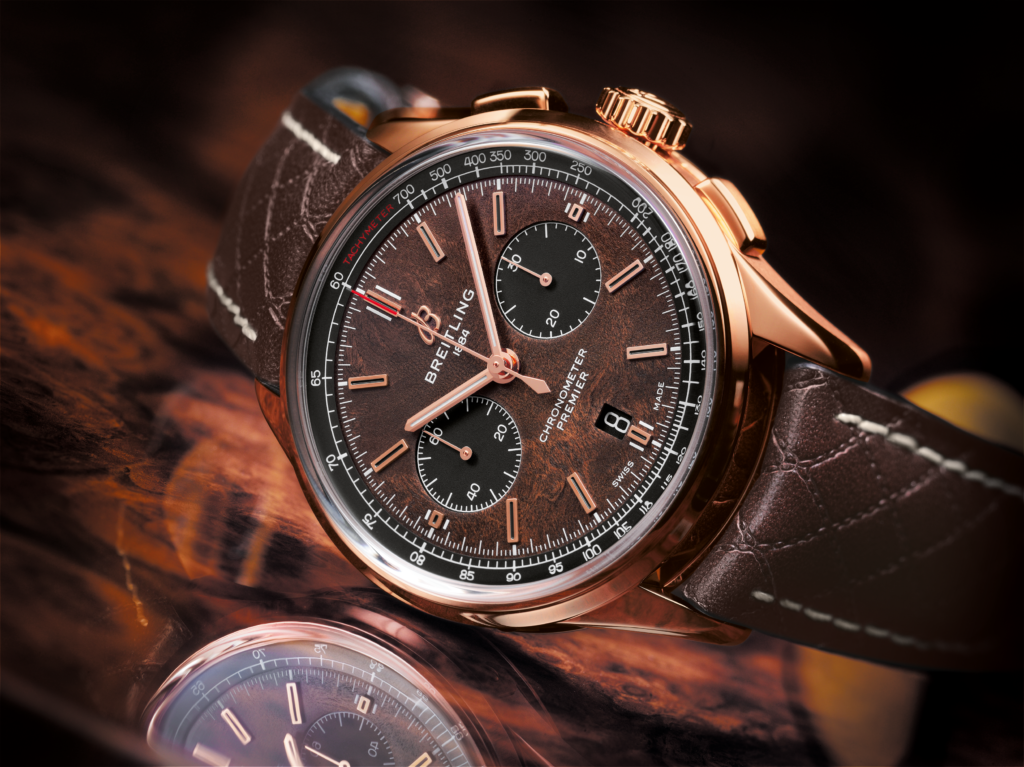 Breitling and Britain’s Bentley Motors enjoy the longest-ever partnership between a watch brand and an automobile manufacturer. In fact, it dates back to 2003, when Bentley, the world’s most admired luxury car brand, launched the very first Continental GT. Every detail in this unrivaled grand tourer reflected Bentley’s ongoing commitment to quality, luxury, and performance, and, fittingly, the company chose Breitling to design the onboard clock. It was the beginning of an important partnership for both brands, and now Breitling has announced the release of the Premier Bentley Centenary Limited Edition, which celebrates 100 years of luxury motoring excellence.

Breitling’s partnership with Bentley Motors can be traced back to 2002, when the iconic automobile brand was designing its legendary Continental GT. Bentley commissioned Breitling to create an onboard clock that would reflect the unparalleled luxury, peerless quality, and extraordinary performance of the new grand tourer, which was debuted in 2003. 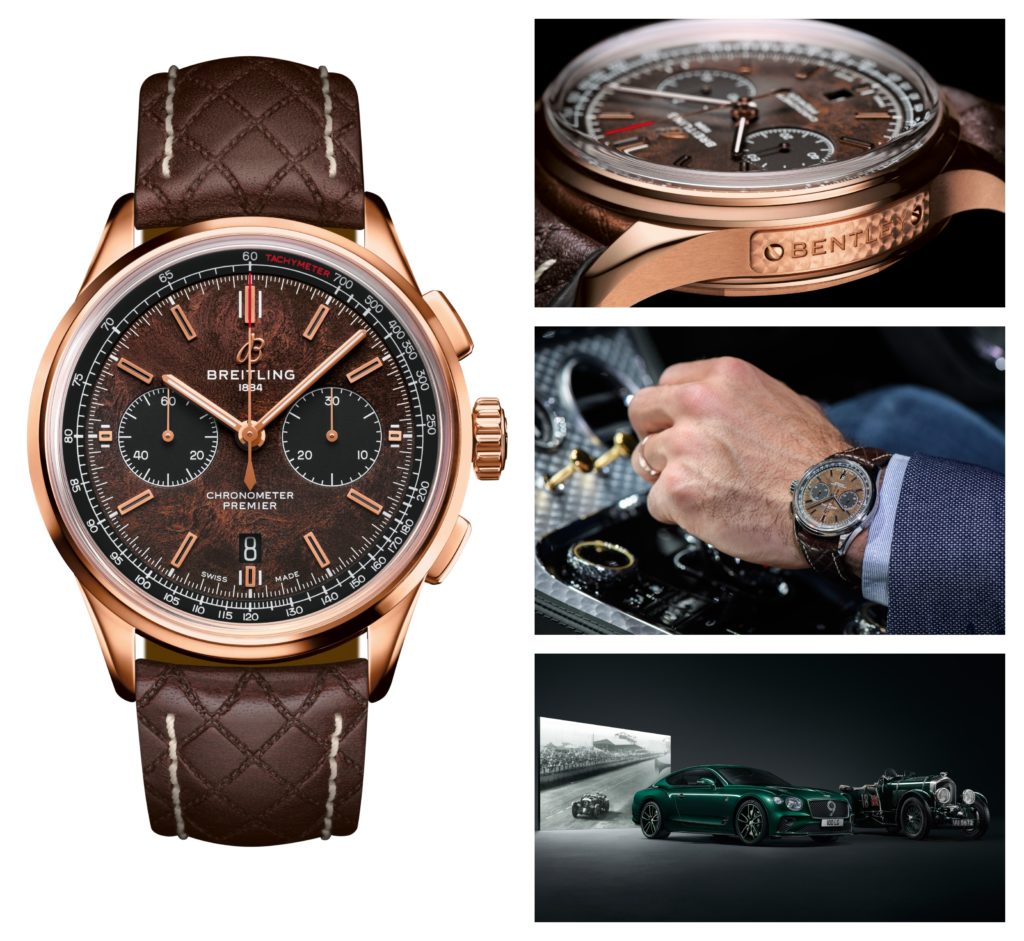 “We’re proud of our partnership with Bentley. Both companies are known for quality, performance, and design excellence, and both are built on powerful legacies. The Premier Bentley Centenary Limited Edition is a celebration of Bentley’s history, its luxury, and its incredible racing pedigree, as well as its important, intimate connection to Breitling.”

The Breitling Premier Bentley Centenary Limited Edition is an exceptional member of the Swiss watch brand’s elegant Premier collection. Produced in 18 k red gold and stainless-steel versions, some outstanding design features distinguish these limited-edition timepieces from all others.

The elegant, unique brown elm burl dial with black subdials (a chronograph minute counter at 3 o’clock and a small-second subdial at 9 o’clock) is particularly eye-catching. These contrasting subdials indicate that the watches are powered by Breitling’s flagship Manufacture Caliber 01. The in-house mechanical movement delivers an impressive power reserve of approximately
70 hours. 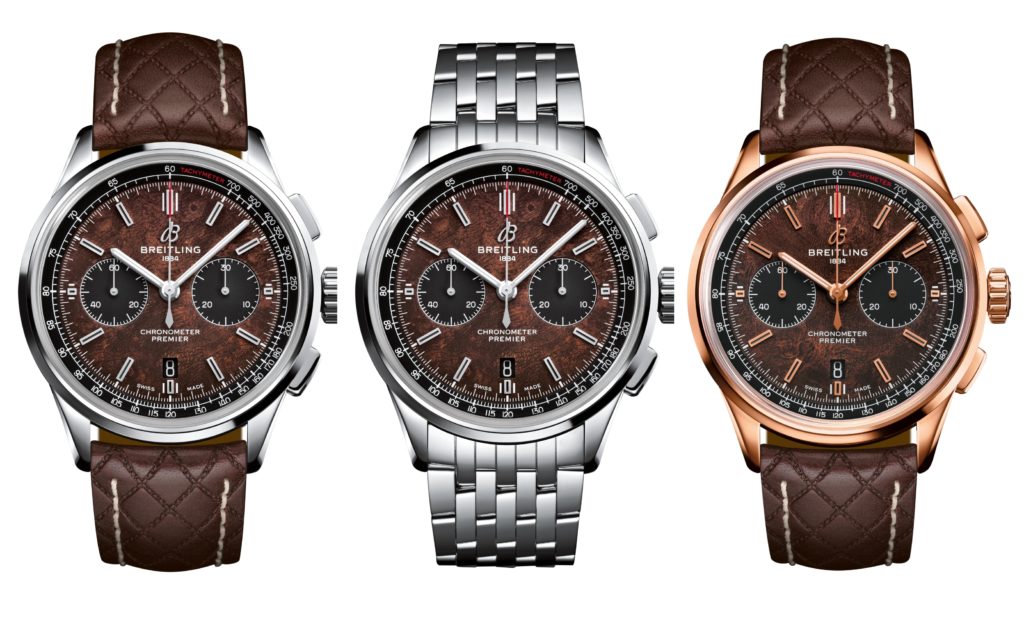 The movement is visible through a unique transparent caseback featuring a Bentley logo. The 18 k red gold version is engraved with a “ONE OF 200” inscription, while the stainless-steel version is inscribed “ONE OF 1000”, confirmation of the edition sizes for the watches.

The dial features a white tachymeter scale on a black inner bezel around the dial, with a red tachymeter inscription.

The Breitling Premier Bentley Centenary Limited Edition in 18 k red gold is presented on a brown leather strap whose pattern and stitching were inspired by the seats in a Bentley. The stainless-steel version will be available on the brown Bentley-inspired leather strap as well or on a stainless-steel bracelet.
On the left-hand side of the 42-millimeter stainless-steel case is a plate with an engraved “Bentley” inscription, whose design is based on the dashboard of the historic supercharged 1929 “Blower” Bentley.

The Breitling Premier Bentley Centenary Limited Edition is a COSC-certified chronometer, an independent confirmation of its precision.

The Breitling Premier: Elegant Watches for Men and Women of Style, Purpose, and Action

In the 1940s, Breitling introduced its first collection of truly elegant watches, which were defined by their fashionable flair. The new Breitling Premier collection combines purpose with style, delivering quality, performance, and timeless design that are worthy of the watch brand’s proud legacy.

“The long-standing collaboration between Bentley and Breitling is a sterling example of how brands with shared values work together in an authentic way – the performance of both is enhanced. While we are certainly celebrating our past in our centenary year, our focus is on a future characterized by our passion for innovation. It is exciting to introduce our Centenary Limited Edition – Continental GT Number 9 Edition at the same time and in the same place that Breitling is launching its Premier Bentley Centenary Limited Edition watch. These two releases define both companies’ unwavering commitment to technological excellence, expert craftsmanship, and a pioneering spirit.” 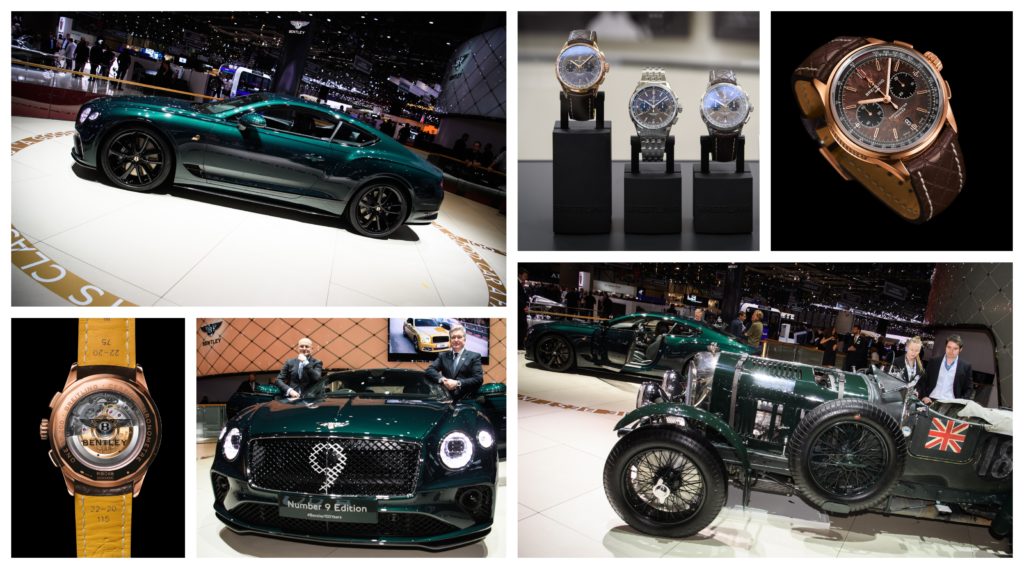 While Bentley is known for its luxurious road cars, the brand also has an impressive history on the track. Between 1924 and 1930, the famous Bentley Boys and Girls won the 24 Hours of Le Mans race five times. That success, however, is not only a part of the brand’s distant past. In 2003, Bentley returned to Le Mans and took the first and second place finishes. At that edition of the world’s most famous endurance race, Breitling was Team Bentley’s proud main sponsor.

Sir Tim Birkin was one of the legendary Bentley Boys, and it was in the No. 9 – his own car – that he raced and broke records in. It was his vision that brought a supercharger to a Bentley. While the official name of the car was “4½ Litre Supercharged,” they soon became widely known and admired as the “Blower” Bentleys.

Perhaps the greatest of all the Blower’s races was the 1930 Le Mans, where Sir Tim drove the second of the five Birkin team cars, registration UU 5872 and carrying race number 9.
In celebration of the car and its driver, the Bentley Continental GT Number 9 Edition by Mulliner features a wood insert from the seat of his iconic 1930 No. 9 Le Mans race car. Set in resin and situated in the middle of the center dial of the rotating display, it adds a tantalizing piece of history to each Limited Edition.

When Sir Tim Birkin’s car was being restored, it was necessary to replace the wood insert, making the original wood available for a place of honor in the new automobiles.

The wooden dials that contribute to the allure of the Premier Bentley Centenary Limited Edition watches are an important link to the wood inserts in the new Continental GT Number 9 Edition and, by extension, to the days in which the original Bentley Boys and Girls attracted so much attention with their successes on the track and their headline-making antics when they were not racing. The Breitling Premier Bentley Centenary Limited Edition watches are a stunning celebration of two great luxury brands that are appreciated around the globe for their design, their performance, and their history.

Since 1884, Breitling has established a global reputation for high-precision timepieces, its pioneering role in the development of the wrist chronograph, and its uncompromising commitment to design excellence. With the brand’s storied association with aviation, Breitling has shared the finest moments in humankind’s conquest of the skies. Renowned for its spirit of innovation, it has also earned a place of privilege in the worlds of science, sport, and technology. Breitling manufactures its own movements in-house, and the quality of every watch is confirmed by its status as a COSC-certified chronometer, made in Switzerland.

Bentley Motors is the most sought-after luxury car brand in the world. The company’s headquarters in Crewe is home to all of its operations, including design, R&D, engineering and production of the company’s four model lines – Continental, Flying Spur, Bentayga, and Mulsanne. The combination of fine craftsmanship, using skills that have been handed down through generations, alongside engineering expertise and cutting-edge technology is unique to UK luxury car brands such as Bentley. It is also an example of high-value British manufacturing at its best. Bentley employs around 4000 people at Crewe.