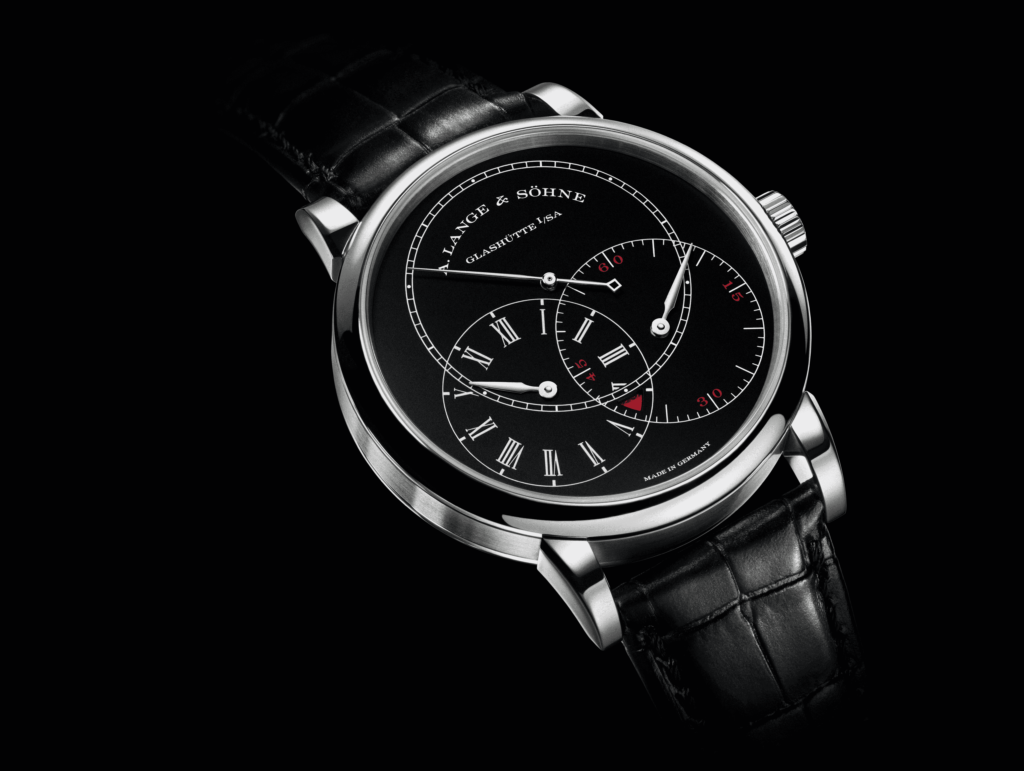 The RICHARD LANGE JUMPING SECONDS makes a strong statement with its prominent white-gold case and black dial. The scientific-technical design of the timepiece is emphasised with minimalistic red colour accents.

Ever since it was launched in 2016, Lange’s first new-era model with jumping seconds has stood out with its sleek design and mechanical finesse. Its regulator dial with the large seconds circle at the top draws the attention to the smallest of the three units of time. The smaller hour and minute circles arranged beneath it are positioned to the left and right.

A. Lange & Söhne is presenting a version with a black dial at the SIHH 2019 in Geneva.
Subtlety in colour and the symmetry of the circles recall Bauhaus design concepts. The clear contrast of white markings on a black background adds a new aesthetic dimension to the
regulator architecture emphasised by its red accents. The display in the lower zone where the hour and minute indications intersect is a special eye-catcher: Ten hours before the unwound state is reached, it switches from white to red, reminding the wearer that the watch needs to be rewound soon. 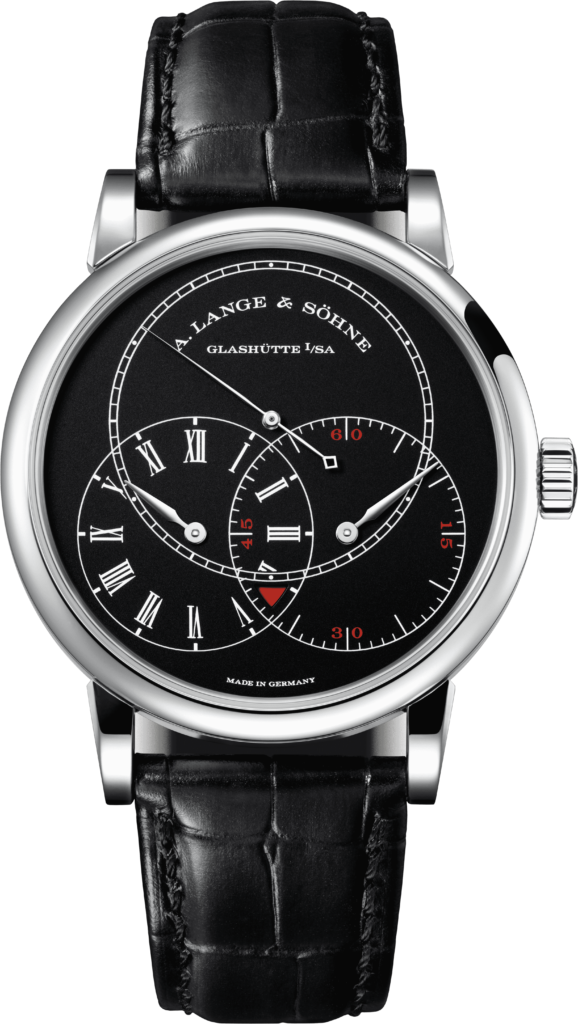 The indication of the time units with three overlapping displays dates back to Dresden-based astronomer and watchmaker Johann Heinrich Seyffert. His famous pocket chronometer No. 93,
completed in 1807, was the first watch with such a dial arrangement. Despite its historic roots, the RICHARD LANGE JUMPING SECONDS is decidedly contemporary and functional. Against
the dark background of the flat dial, the hands – in solid gold for the hours and minutes, and in rhodiumed steel for the sweep seconds – stand out prominently. The interplay between contrasting bright and dark colours is echoed by the black alligator leather strap with a whitegold buckle.

With superior rate accuracy and eminent legibility, the RICHARD LANGE watch family continues the tradition of scientific observation watches at A. Lange & Söhne. Its name pays tribute to Ferdinand Adolph Lange’s first-born son. Throughout his entire life, Richard Lange was committed to harnessing the latest scientific insights in the interest of progress in watchmaking. A metal alloy for balance springs, still used today, is one of his 27 patented inventions. In an evolved form, the stoppable jumping sweep seconds conceived by his father was granted one of the first patents in Germany in 1877. 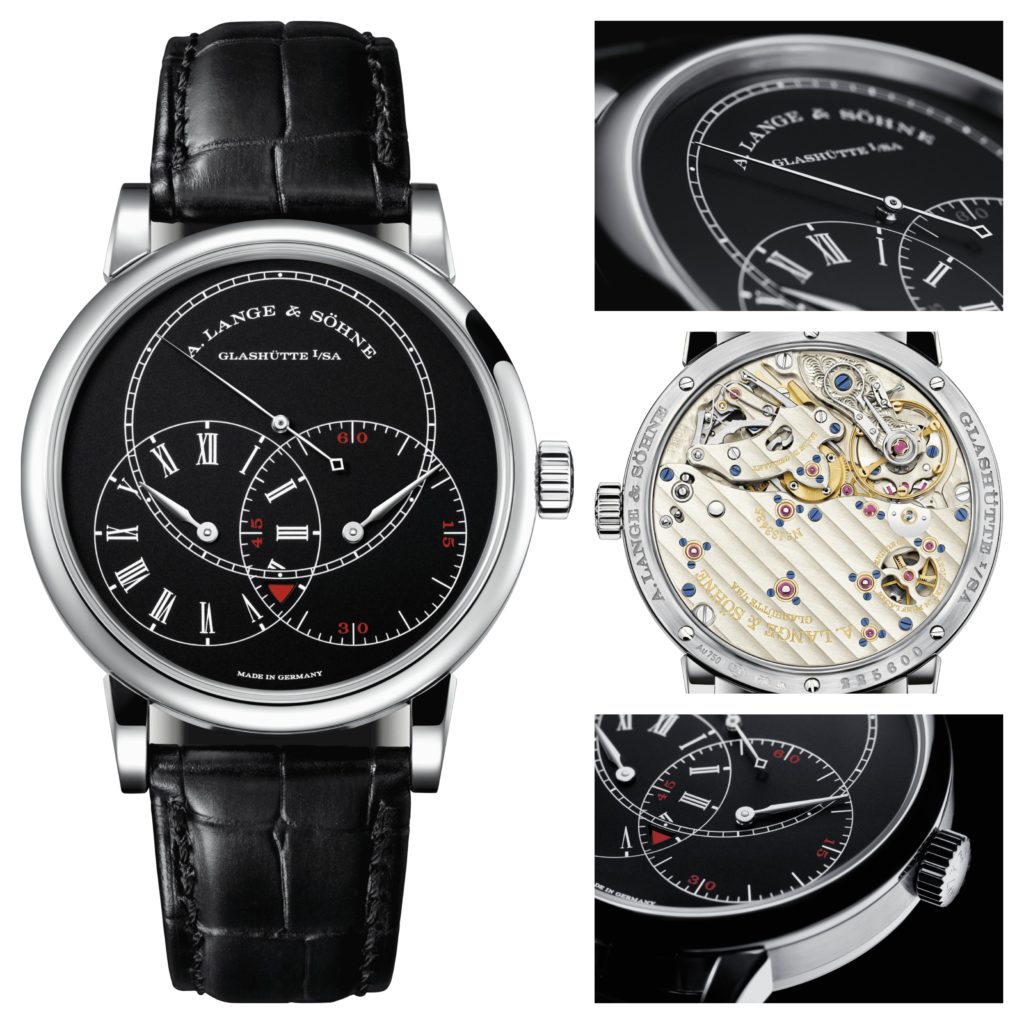 The RICHARD LANGE JUMPING SECONDS carries the concept of the observation watch over into the 21st century. With its unique combination of a constant-force escapement for the seconds, jumping seconds, and ZERO-RESET function, it showcases the key hallmarks of an observation watch: dependability, precision, and clarity. In the L094.1 manufacture calibre, three complex mechanisms interact to drive the balance with a uniform amount of energy across the maximum power reserve of 42 hours, to advance the seconds hand from marker to marker 86,400 times a day, and to activate the ZERO-RESET function.

Acting as a spring-powered remontoir system, the constant-force escapement of the RICHARD LANGE JUMPING SECONDS transforms the gradually declining torque of the mainspring barrel into identical bursts of energy that are delivered to the escapement in one-second intervals. Additionally, switching impulses are generated for the jumping seconds. The first pocket watches with this complication date back to the late 18th century. As precursors of the chronograph, they were used for time measurements with one-second resolution. They helped naval navigators find their way, assisted astronomers in determining celestial meridian passages and allowed physicians to measure heart rates.

When the crown is pulled out, the patented ZERO-RESET mechanism of the RICHARD LANGE JUMPING SECONDS stops the cam-poised balance wheel, advances the seconds hand to the zero position as in a chronograph, and thus simplifies time setting. For this purpose, the flow of power from the constant-force escapement to the going train must be interrupted. This is done with a proprietary multi-disc clutch. It steadies the seconds hand in its position as it incrementally jumps forward, making it possible to reliably block and re-establish the flow of power.

The finissage of the 390-part manually wound movement complies with the strictest Lange standards. Together, the bridges made of untreated German silver and decorated with Glashütte ribbing, the hand-engraved balance cock, the eight screwed gold chatons, and the lavishly decorated and polished surfaces give the RICHARD LANGE JUMPING SECONDS its classic Lange face on the movement side as well.

Check out all the A. Lange & Sohne piece we have in stock on our online boutique. CLICK HERE