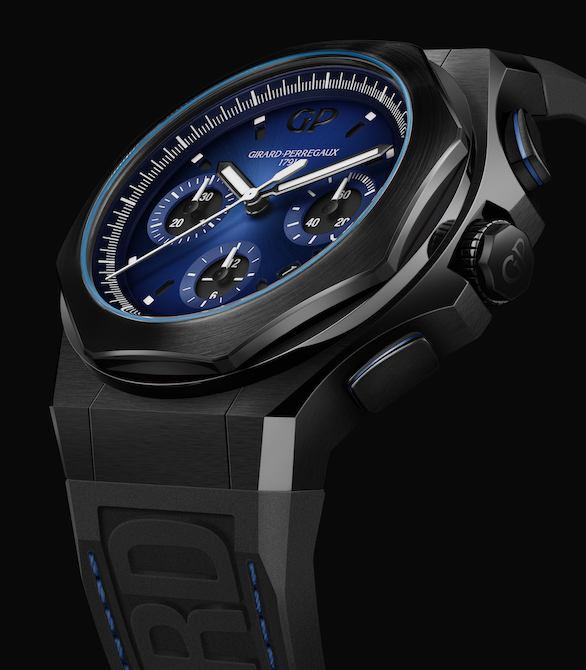 The inner strengths of the original model are revealed through an uncompromising masterwork. More sophisticated and more contemporary, it stems from a comprehensive approach to formulating the urban expression of today’s active men.

A stronger presence on the wrist thanks to a broader 44 mm diameter, a lighter feel with a case now made of black PVD-treated titanium, along with water-resistance pushed to 300 metres, all complemented by a new fully integrated rubber strap.

After bringing Laureato firmly back into the spotlight, Girard-Perregaux orchestrates an evolution of its icon that makes it even more powerful. This piece by Girard-Perregaux is a distillation of watchmaking expertise, enhanced by a broader case middle with tauter lines. This new structure, entirely clad in black PVD-treated titanium energised by an electric blue ring, is now water-resistant to 300 metres.

With Laureato Absolute, Laureato Absolute Chronograph and Laureato Absolute WW.TC, Girard-Perregaux presents a trio of radical, assertive and singular timepieces endowed with a 44 mm diameter case, framing sunburst dials with a colour gradation running from dark blue in the centre to deep black around the rim.

The white inner bezel ring with its luminescent accents accentuates the depth of the matt black hour- markers.

Perfectly integrated with the case, a blue-stitched black rubber strap is injection-moulded with the names Girard and Perregaux, thus affirming its belonging to a Maison of traditions. An inner force that draws its energy from the fundamentals of the cosmos as a quest for the extraordinary, for affirmations of who we are as human beings.

In addition, its play on colours, black as the universe, blue as the sky, makes the Laureato Absolute a natural fit within the “Earth to Sky” theme guiding Girard-Perregaux’s 2019 new launches.

The Laureato is based on a genetic code that involves changing subtle details in its appearance without ever altering its essence. Laureato Absolute reprises these fundamental principles while giving them a resolutely urban and contemporary twist.

The three-handed plus version of the Laureato Absolute is distinguished by a red seconds hand, a symbol of strength and energy.

Laureato Absolute Chronograph captures the essence of the deliberate sportiness of this series. The emblematic sports-type complication naturally finds its place in this distinguished design. The redesigned pushers are now also more angular. Their curved surface, highlighted by a blue border, ensures enhanced ergonomics.

Finally, Laureato Absolute WW.TC explores one of Girard-Perregaux’s best-known complications: the WW.TC (worldtime) movement. More relevant than ever in a globalised world, this function makes its first-ever appearance in the most avant-garde model from the Maison: Laureato Absolute.

Girard-Perregaux is a Swiss high-end watch manufacturer tracing its origins back to 1791. The history of the brand is marked by legendary watches that combine sharp design with innovative technology.

Aesthete of the invisible, in 2019 the Maison is exploring the Cosmos, the essence of time, by introducing a new universe of innovative materials and unexpected complications within the fundamental collections, united by a single theme: “Earth to Sky”.

Girard-Perregaux is part of the Kering Group, a world leader in apparel and accessories, which develops an ensemble of powerful Luxury and Sport & Lifestyle brands.