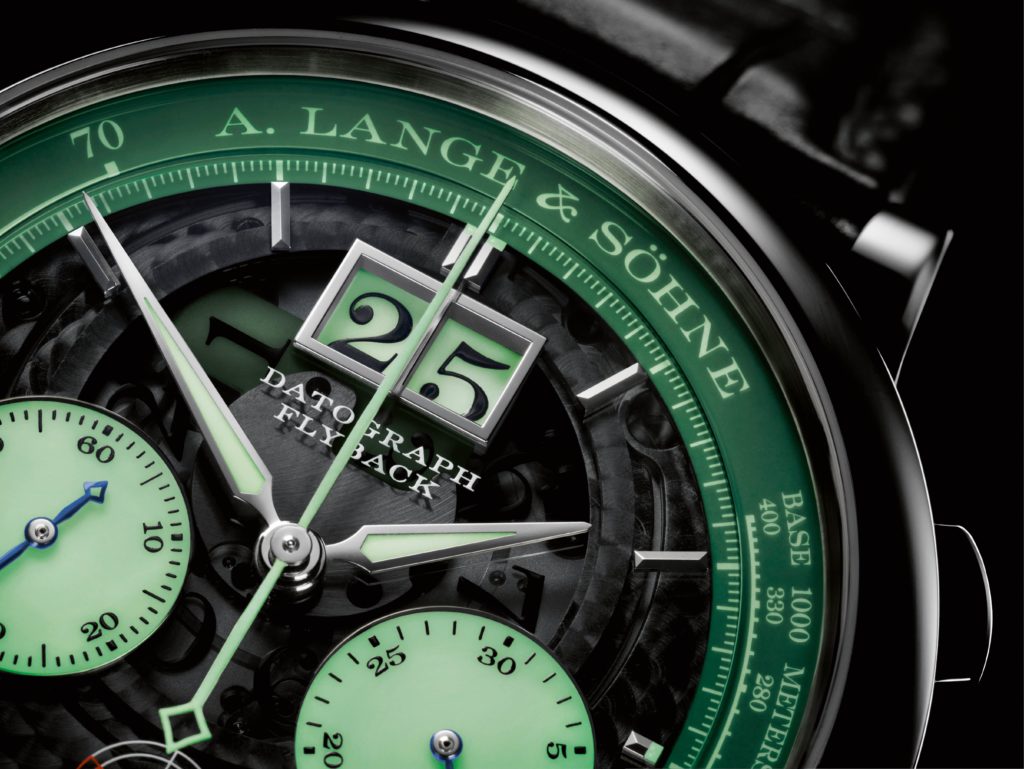 The new A. Lange & Söhne model reliably tells the time around the clock, and its stop function can be used at any time as well. This is because all indications are legible even in darkness, thanks to its semi-transparent dial and luminous displays. The chronograph – with a flyback function, a precisely jumping minute counter and a power-reserve indicator – comes in a limited edition of 200 watches.

What strikes the eye at first sight of the DATOGRAPH UP/DOWN is its vibrant and yet harmoniously balanced dial design. The characteristic outsize-date display in the framed double aperture marks the tip of an equilateral triangle. Its baseline is defined by the two subsidiary dials for the seconds and the precisely jumping minute counter. In the DATOGRAPH UP/DOWN “Lumen”, the ingenious configuration unfolds a new aesthetic dimension as soon as darkness sets in.

This is achieved with a semi-transparent dial and a luminous compound that causes all displays to glow in the darkness – with a distinctive green hue that the human eye perceives as particularly pleasant. The hour and minute hands are filled with the luminous material; the chronograph sweep seconds hand is fully coated with the compound. The seconds hand and minute counter in blued steel revolve above subsidiary dials that are noctilucent, too. The circumferential dial ring with the minute scale that is subdivided into fifth-of-a-second graduations, the concentric tachometer scale and the power-reserve arrow applique also glow in green.

But the real stunner is the luminous outsize date. Composed of two separate display elements, the outsize date is designed to glow immediately after the midnight switching sequence as well. This is made possible with a luminous tens cross and a black printed units disc made of transparent glass which rotates above a luminous background. Both elements must be able to recharge during the day when they are positioned beneath the dial. This is enabled by the semi-transparent dial; even during the day, it endows the watch with inimitable aesthetic appeal. Its coating not only assures crisp legibility in daylight but also allows the luminous compound on the tens cross to be recharged. When exposed to light, the outsize date mechanism is clearly visible. Thus, the switching action of the date display at midnight can be observed in detail in ambient light.

The DATOGRAPH UP/DOWN “Lumen” is the fourth model of the “Lumen” series that A. Lange & Söhne launched in 2010. A special coating on the semi-transparent sapphire-crystal dial filters out most of the visible light, but not that part of the UV spectrum which is needed to charge the luminous pigments with light energy. The darker the surroundings, the more clearly the displays contrast against the dark background.

In 1999, A. Lange & Söhne defined new benchmarks in chronograph design with the DATOGRAPH. Its flyback function allows consecutive measurements: an ongoing measurement can be interrupted and a new one started instantaneously with a single touch of the button at 4 o’clock. This rare function saves time because the flyback mechanism executes the three normally necessary stop, reset and restart steps with only one touch of a button.

The precisely jumping minute counter of the chronograph advances by one marker exactly when the chronograph sweep-seconds hand passes the 60th second, even if the time measurement is stopped at that very moment. This elaborate technology simplifies the doubt-free reading of stopped times. Launched in 2012 as a systematic refinement of the classic column-wheel chronograph, the DATOGRAPH UP/DOWN also indicates how much of the 60-hour power reserve remains available. This information is provided by the power-reserve indicator at 6 o’clock. When the small arrow enters the red zone of the display, it is time to provide the movement with fresh energy.

The sapphire-crystal caseback exposes the impressive beauty of the lavishly finished 454- part manually wound calibre L951.7 of the DATOGRAPH UP/DOWN “Lumen”. Lange’s proprietary cam-poised balance wheel, paired with a freely oscillating Lange hairspring, beats at a frequency of 18,000 semi-oscillations per hour (2.5 hertz). In combination with the 300-marker minute scale, this allows time measurements with a resolution of one-fifth of a second. The new model, available in a limited edition of just 200 watches, comes in a 41-millimetre platinum case. It is worn on a black alligator leather strap with a platinum prong buckle.

Dresden watchmaker Ferdinand Adolph Lange laid the cornerstone of Saxony’s precision watchmaking industry when he established his manufactory in 1845. His precious pocket watches remain highly coveted among collectors all over the world. The company was expropriated after World War II, and the name A. Lange & Söhne nearly vanished. In 1990, Ferdinand Adolph Lange’s great-grandson Walter Lange had the courage to make a new start. Today, Lange crafts only a few thousand wristwatches in gold or platinum per year. They are endowed exclusively with proprietary movements that are lavishly decorated and assembled by hand. With 62 manufacture calibres developed since 1994, A. Lange & Söhne has secured a top-tier position in the world of watchmaking. Brand icons such as the LANGE 1 with the first outsize date in a regularly produced wristwatch and the ZEITWERK with its precisely jumping numerals display, rank among the company’s greatest successes. Sophisticated complications such as the ZEITWERK MINUTE REPEATER, the TOURBOGRAPH PERPETUAL “Pour le Mérite” and the TRIPLE SPLIT reflect the manufactory’s determination to achieve ever new pinnacles in horological artistry.

Check out more about the A. Lange & Söhne in stock – CLICK HERE