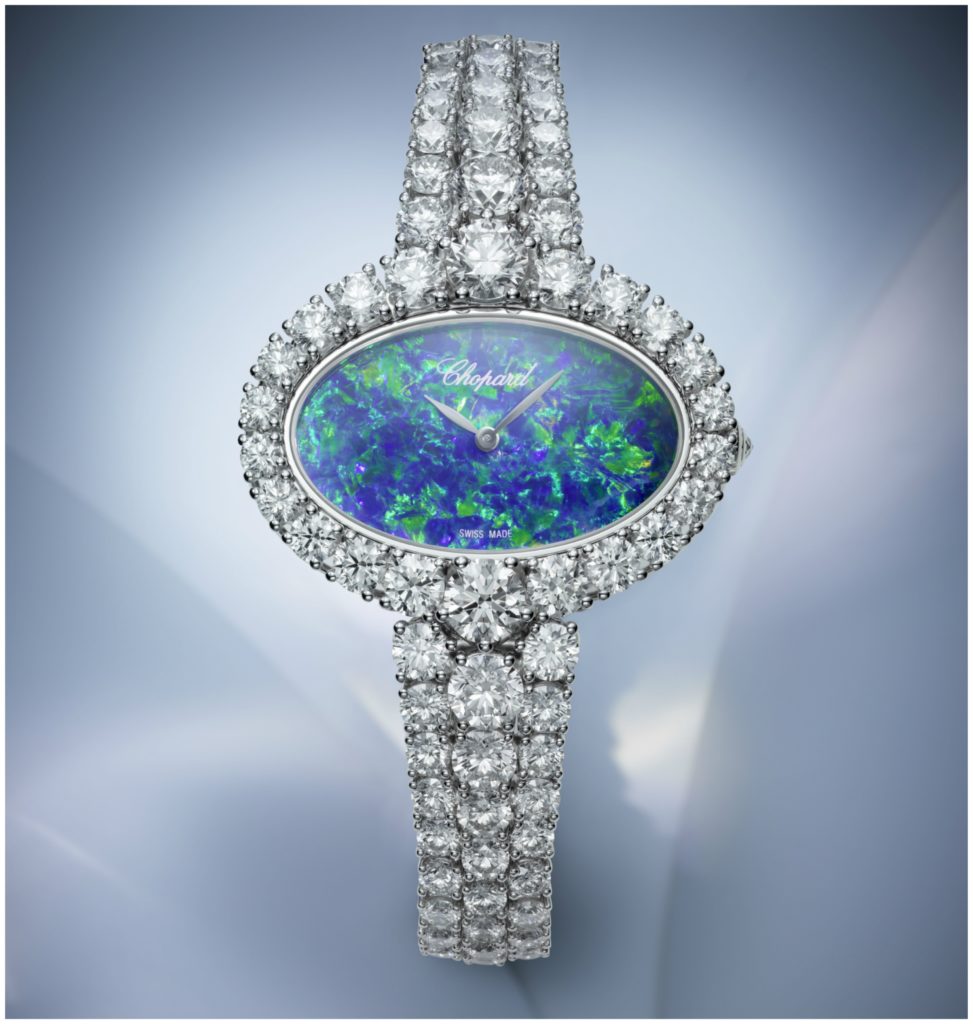 The iridescent mysteries of time and opal

Chopard, the supremely creative watchmaker-jeweller, has brilliantly captured the complexity and power of opal in a stunning tribute. Its ateliers have orchestrated an encounter between contemporary design and this stone with its manifold secrets. A collection of three watches, like vibrant talismans, testifies to the dreamy magic they are capable of conveying through a perfect alchemist’s blend of form and matter.

The mysterious and precious L’Heure du diamant opal watches from Chopard whisper untold secrets of the ages and bear the stamp of immemorial beauty. The dreamily romantic aura of these creations is expressed in kaleidoscopic vision.  Vibrantly mesmerising natural white Australian opal offers far more than a spectrum of changing colours and lights. At the very heart of these treasures, it gives life to dazzling constellations of emotions revealed at each lingering glance.

It is worth recalling that, well before watches appeared in large sizes, they harboured the secrets of time on women’s wrists with the greatest discretion. They were first and foremost adornments, flamboyant jewellery creations in which function was subservient to form.

The Chopard L’Heure du diamant collection revives this sense of elegant nostalgia by borrowing its oval case from the 1970s style repertoire. The latter source of inspiration exerts a powerful influence on fashion in general and watchmaking in particular, honouring timeless femininity through delightfully light and trim designs. A model with a small round case completes this L’Heure du diamant trilogy, celebrating the perfect proportions of a classic archetype.

On all three models, the bezel is entirely paved with brilliant-cut diamonds. The most precious version extends its dazzling diamond setting along the bracelet, enhanced by two larger diamonds placed at 6 and 12 o’clock on the bezel. Splendid craftsmanship testifying to the virtuoso expertise cultivated in the Chopard High Jewellery studios.

Opal, from stone to jewellery watch

Gyges was able to make himself invisible by turning his opal ring: since ancient times, Greek and Roman mythology have ascribed magical properties to this stone. From the Middle Ages to the Second Empire period, opal left its fiery mark on history, consistently sparking its own myths that have remained to this day. Powerful and subtle, flamboyant and iridescent, opal fascinates by its distinctive luminosity that appears to breathe unique life into the stone. Its mobile nature, its changing colours and its elusive shimmer have led opal to be regarded as symbolising entirety, an emanation of sacredness…