On 8th November 2017, Parmigiani Fleurier was invited onto the stage at the Grand Prix d’Horlogerie de Genève (GPHG) in recognition of two watches that have caught the public imagination.

The Tonda Chronor Anniversaire won the “Chronograph” category, while the Toric Hémisphères Rétrograde took the top spot in the “Travel Time” category. A MUCH-ANTICIPATED VICTORY AT GPHG!

This double award recognises Parmigiani Fleurier’s 21 years of dedicated work and horological progress. It reveals the spirit of dynamism that drives the brand and the expression of renewal that bears its fruits.

It reflects the extraordinary potential of its independent Watchmaking Centre, which is able to produce every watch component, as well as innovate, break new ground and create authentic horological pieces.

This award is dedicated to Michel Parmigiani, and to the pursuit of excellence that drives his work; it is also dedicated to the Sandoz Family Foundation, which has consistently and confidently invested in this incredible watchmaking adventure.

An integrated chronograph is one of the most delicate complications to produce industrially as it relies on kinematics with a chain of actions, each one determining and triggering the next, and each sequence precisely synchronised and adjusted.

The Tonda Chronor Anniversaire, unveiled to mark Parmigiani Fleurier’s 20th anniversary, is a world first with a movement that reveals much about the potential of the brand’s independent manufacturer. The hand-wound calibre PF361 has a split-seconds chronograph controlled by two column wheels and a large date, all on the same main plate.

This movement is made entirely from rose gold, and oscillates at 36,000 vibrations/hour, or 5 Hertz. It bears Michel Parmigiani’s signature, engraved on the barrel bridge. The dial in Grand Feu enamel is the timepiece’s crowning glory. 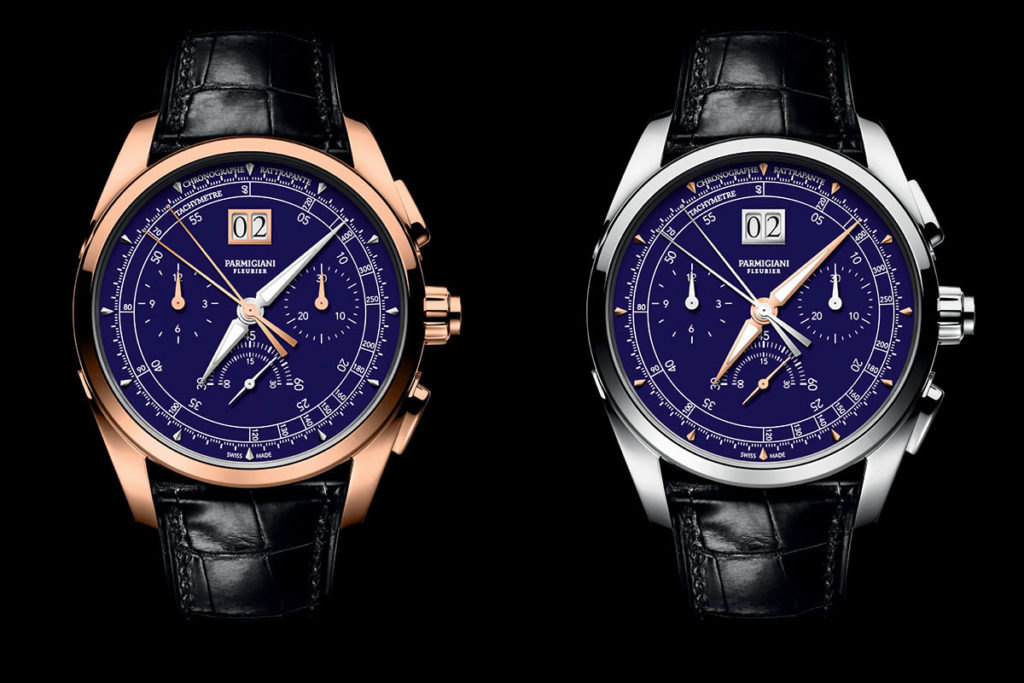 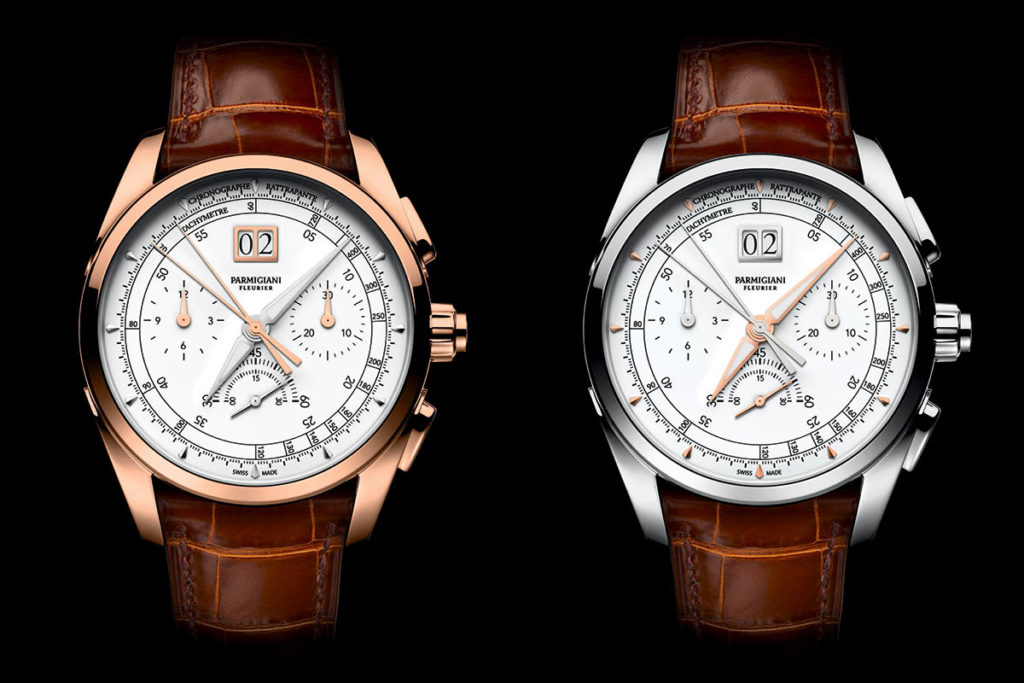 The Toric Hémisphères Rétrograde has two time zones each accurate to the minute – a rare feature on the GMT watch market. To guarantee this double accuracy, the calibre PF317 is equipped with a module that controls the second time zone and can be indexed to the main movement or disengaged from it to allow independent adjustment.

This movement also features an instant retrograde calendar which is indicated by the third central hand. In terms of its style, the distinctive feature of the Toric line is the bezel which features alternating knurling and gadroons, inspired by the structure of an Ancient Greek column.

It is the distinguishing mark of the Toric family, which was the first collection presented by Michel Parmigiani in 1996. In designing it, he used proportions linked to the golden ratio to create a unique, tangible harmony. 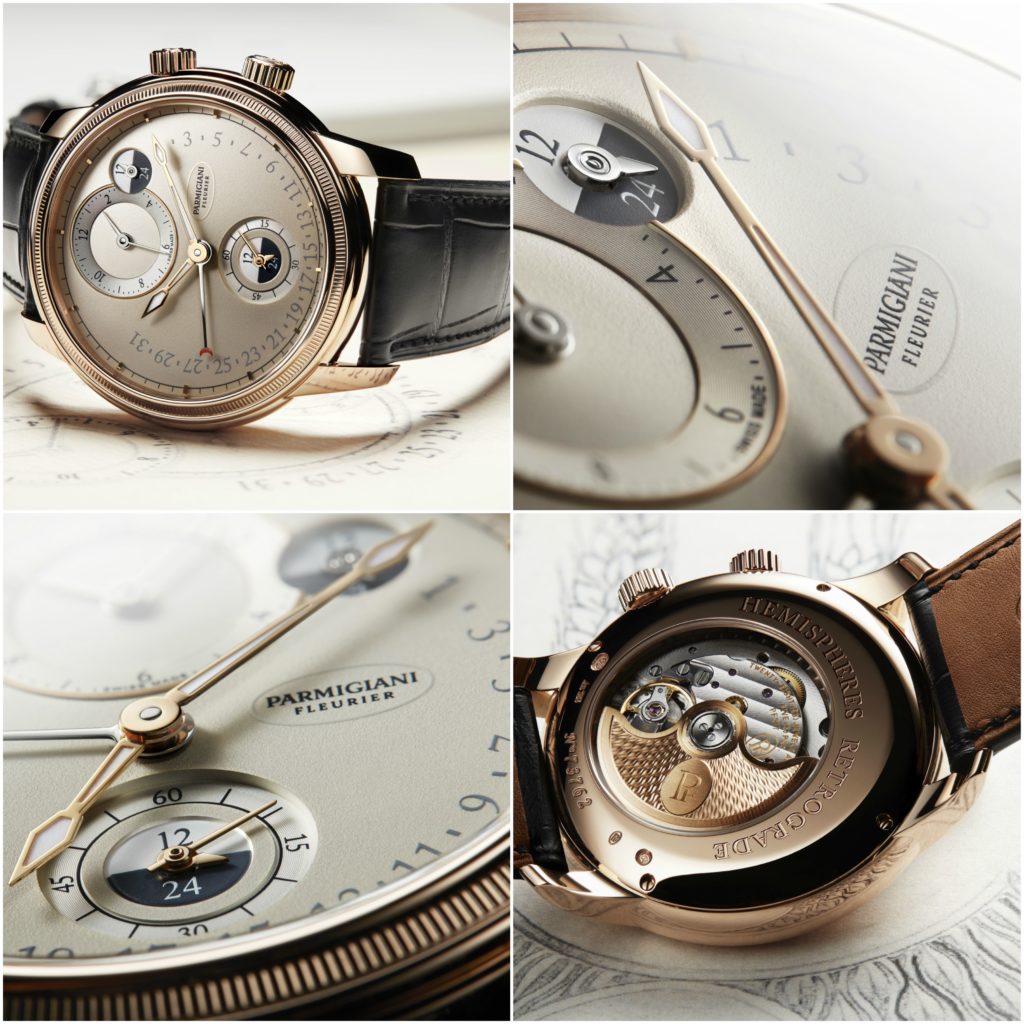