Both options work just as well the other way around and come with a complimentary Jacquard-woven urban-camo fabric strap is included, perfect for edgier fashion tastes.

While it clearly shares the look and feel of the Black Bay product family, The Tudor Heritage Black Bay 41 also differs in many subtle details. Its dial and sapphire crystal are both flat as opposed to the domed ones founds in the rest of the family.

The dial boasts a lacquered glossy, dressier finish to it while the other Black Bays are fitted with mat domed dials. Last but not least, the Tudor Heritage Black Bay 41 has a polished, fixed stainless steel bezel, smartening up the very sporty look of the traditional Black Bay rotatable bezel.

The “snowflake” hands is the single most recognized and recognizable element of TUDOR’s design identity. It appeared for the first time in the 1969 catalogue of the brand with references 7016 and 7021, both diving watches, and remained in offering until the mid-eighties. In 2012, the snowflake hands were brought back with the introduction of the Tudor Heritage Black Bay model.

Together with the 36 version – perfect for smaller wrists and vintage-proportion-lovers – the Tudor Heritage Black Bay 41 is the entry point to the Black Bay family.

It nonetheless retains all the refinements that these products are famous for including finely decorated automatic movements – not manufacture-grade however -, high level of finishing and detailing on all external parts as well as overall great robustness and precision.

The Tudor Heritage Black Bay models draw inspiration from 60 years of TUDOR diving watches merging design elements from different generations into a contemporary watch with a vintage feel. Each version of these Heritage Black Bays, however, is inspired by a specific historic reference.

The Heritage Black Bay “Black” with its red triangle on the bezel, its general lines and its “rivet” bracelet brings back memories of the famous “Big Crown” reference 7924 from 1958 which was the first Tudor watch to offer waterproofness to 200m. Of all the Black Bay models, this is the one closest to an actual vintage reference. 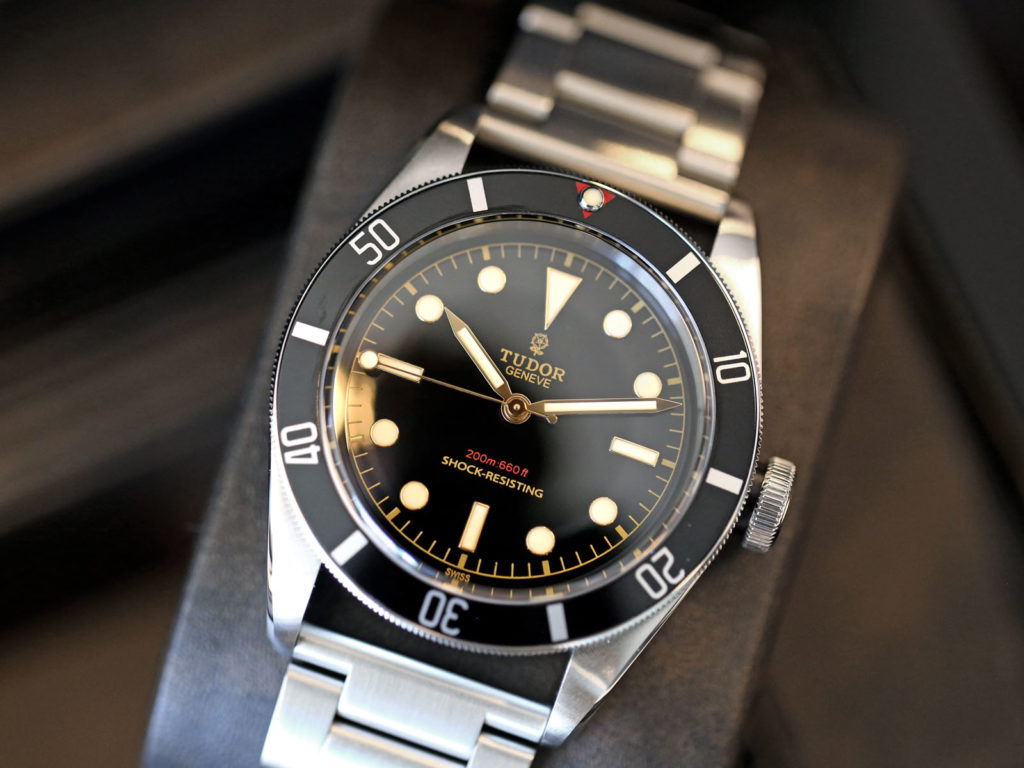 The Heritage Black Bay “Midnight Blue”, with its blue bezel pays tribute to the blue Tudor diving watches from the 70s, bearing reference number 9401, made famous by their characteristic look with snowflake angular hands and hour markers and their extensive use by the French navy. The Tudor Heritage Black Bay “Midnight Blue” is also the most understated version of the three. 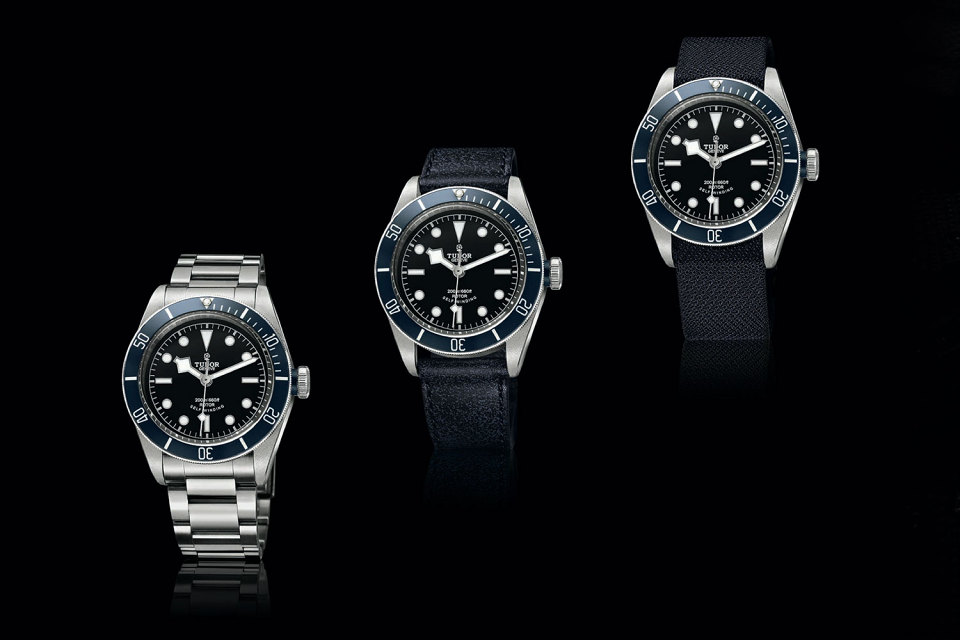 Last but not least, the “original” Heritage Black Bay with burgundy bezel was the first ever Black Bay model and it was introduced back in 2012.

While clearly imbued with a vintage diving watch feel, complete with sun-faded “tropical” tones and design details found on the earliest Tudor Submariners, this version is inspired by a 1990’s Tudor submariner prototype, reference 79190, featuring both a burgundy-toned dial and bezel.

The gold parts on the Black Bay S&G have a satin-brushed or sandblasted matt finish.  This effect gives a warm tone to the yellow gold consistent with TUDOR’s tool watch credentials. 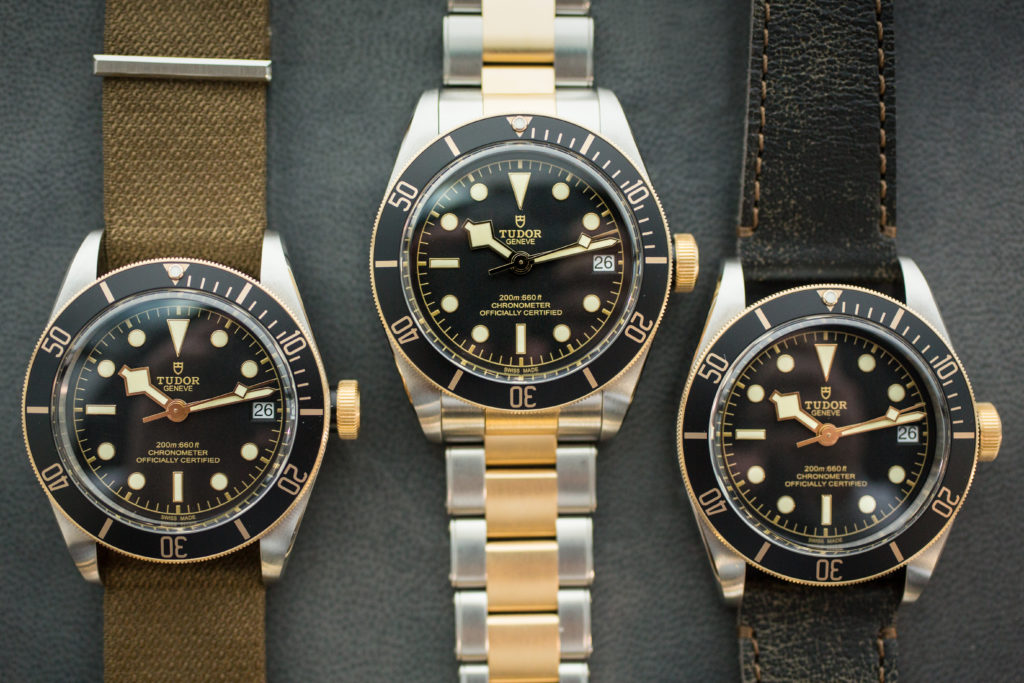 The bezel and centre-links of the Tudor Heritage Black Bay S&G’s bracelet, at 12 and 6 o’clock, are made of 18k solid yellow gold. The other links as well as the crown are made using a gold-shell technique: a piece of 18k solid gold is folded over the stainless steel part. Unlike gold-plating, this technique allows for multiple refurbishments at service as the gold layer is far thicker.

The Black Bay S&G is powered by TUDOR calibre MT5612, featuring hour, minute, second and calendar functions. It is certified by COSC, the independent Swiss precision testing institute. Its other notable features include a “weekend proof” 70-hour power reserve as well as an antimagnetic, high precision silicon balance spring. 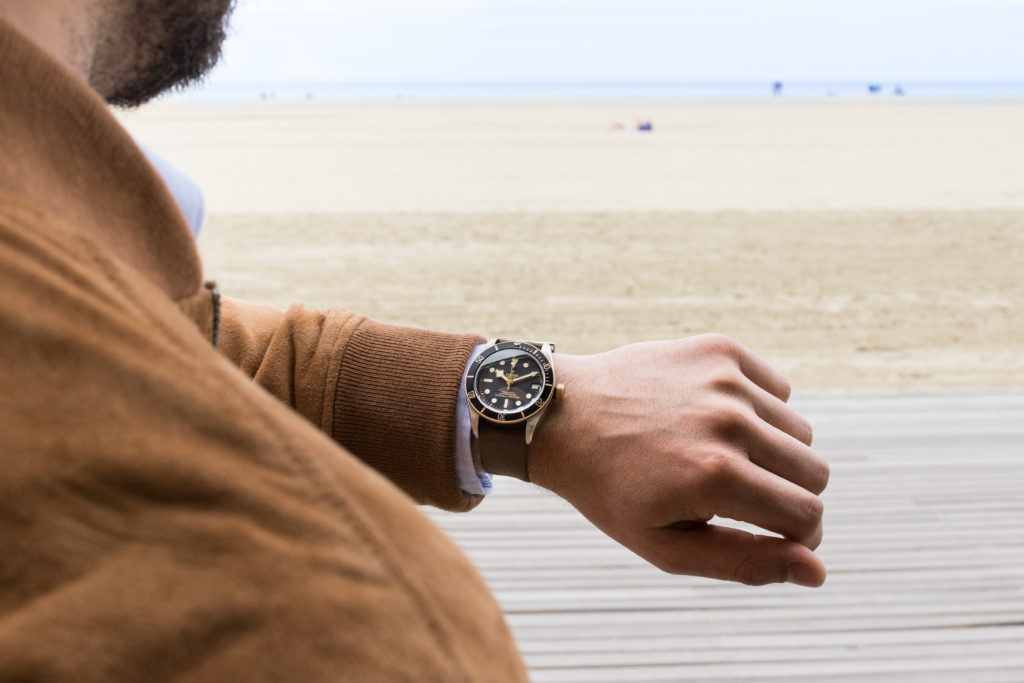