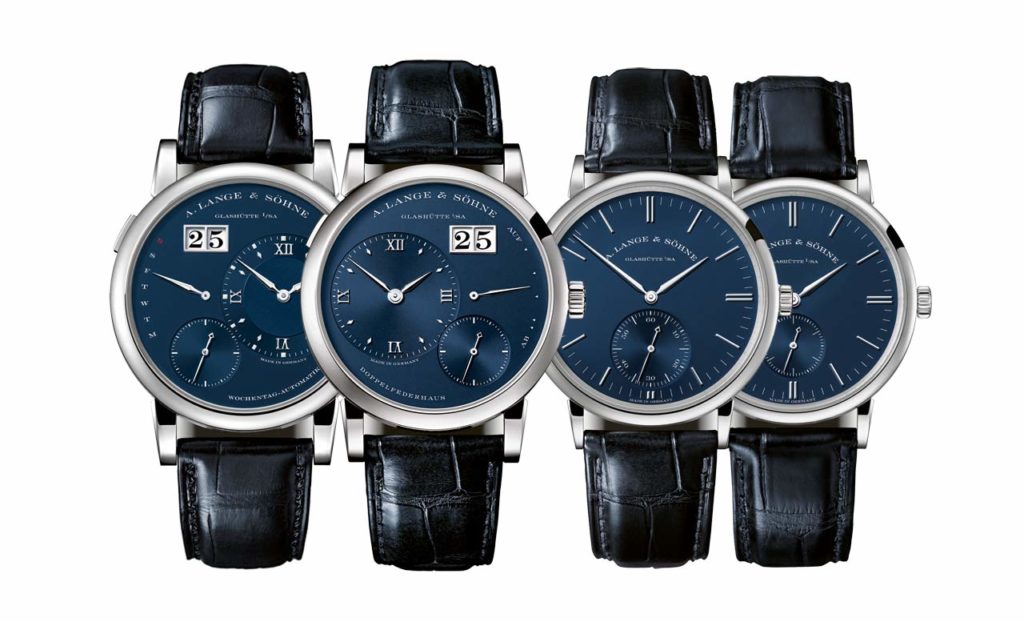 The timeless inherent fascination with the colour blue prompted A. Lange & Söhne to endow two manually wound and two self-winding models from the current collection with deep-blue galvanised dials in solid silver.

Without a doubt, blue is a special colour that has always inspired artists and perpetually preoccupied scientists as well. Universal genius Leonardo da Vinci described the colour of the sky and its expanse as an amalgamation of light and darkness.

The natural ultramarine extracted from lapis lazuli was so rare and precious that Albrecht Dürer likened it to pure gold. It was not until the early 18th century that it became possible to produce a synthetic pigment with a deep-blue hue which did not exist in nature. The discovery of Prussian blue triggered a revolution in the fine arts, without which Hokusai’s Thirty-Six Views of Mount Fuji, Picasso’s Blue Period and Van Gogh’s The Starry Night could not have been created.

The four Blue Series models feature proprietary manufacture calibres that showcase all Lange-style quality hallmarks, from the artisanal finissage of all moving parts to the elaborate twofold assembly process. Even those surfaces that are later no longer visible through the sapphire-crystal case back are lavishly finished and decorated.

The edges of all plates, bridges and cocks are chamfered and then polished to a mirror finish. The hand-engraved balance cock, with the classic whiplash spring, beautifully symbolises Lange’s unfaltering quest for perfection. It is a signature element that makes each A. Lange & Söhne timepiece a unique work of art.

Dresden watchmaker Ferdinand Adolph Lange laid the cornerstone of Saxony’s precision watchmaking industry when he established his manufactory in 1845. His precious pocket watches remain highly coveted among collectors all over the world.

The company was expropriated after World War II, and the name A. Lange & Söhne nearly vanished. In 1990, Ferdinand Adolph Lange’s great-grandson Walter Lange had the courage to relaunch the brand.

Today, Lange crafts only a few thousand wristwatches in gold or platinum per year. They are endowed exclusively with proprietary movements that are lavishly decorated and assembled by hand. With 59 manufacture calibres developed since 1994, A. Lange & Söhne has secured a top-tier position among the world’s finest watch brands.

Brand icons such as the LANGE 1 with the first outsize date in a regularly produced wristwatch and the ZEITWERK with its precisely jumping numerals display, rank among the company’s greatest successes. Sophisticated complications such as the LANGE 1 TOURBILLON PERPETUAL CALENDAR, the ZEITWERK MINUTE REPEATER or the TOURBOGRAPH PERPETUAL “Pour le Mérite” reflect the manufactory’s determination to achieve ever-new pinnacles in horological artistry.