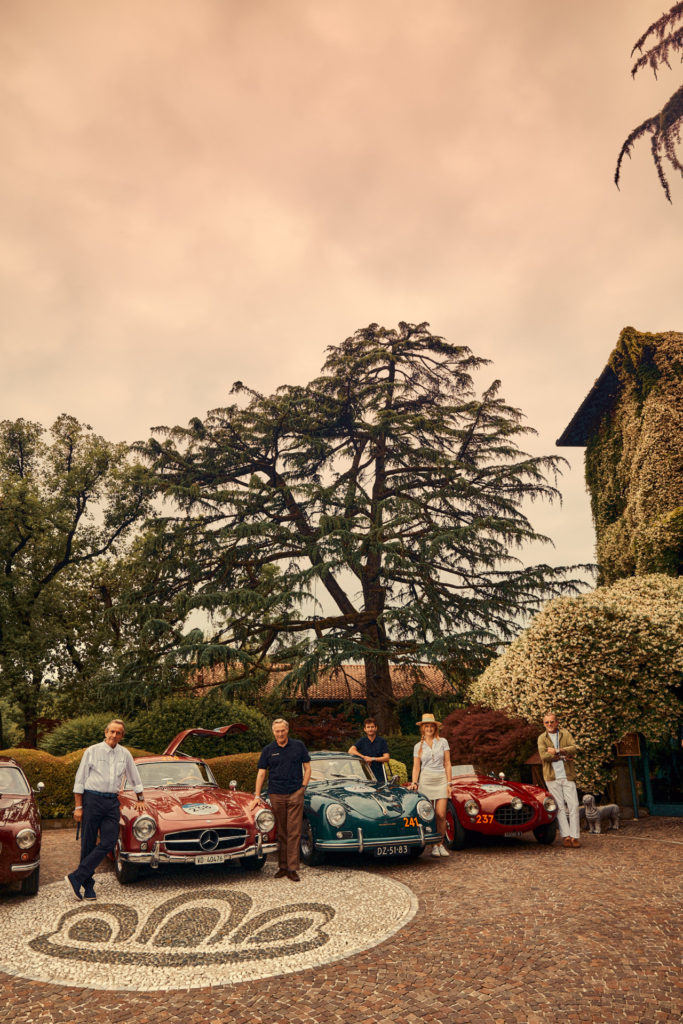 The Maison marks its 34th year as official timekeeper

Brescia, 17 June 2021 – And…they’re off! The Chopard 1000 Miglia 2021 was flagged-away beneath the warm Italian sun yesterday afternoon, with 375 entries leaving the start ramp on the Viale Venezia at 30-second intervals to begin their thrilling, four-day adventure.

During the build-up to the start, Chopard Co-President and long-standing 1000 Miglia competitor Karl-Friedrich Scheufele toured the paddock along with his trusted co-pilot Jacky Ickx, six-times Le Mans winner, and Chopard Ambassador Romain Dumas.

Earlier in the day, all the competing cars created a memorable assault on the senses as they took part in a parade at the Villaggio in Brescia’s Piazza Vittoria.

It is the 34th year in succession that Chopard has participated in the celebrated 1000 Miglia car rally as the historic event’s main partner, official timekeeper – and enthusiastic competitor.

The 2021 1000 Miglia runs until Saturday (19 June), and sees the usual direction of the course reversed, meaning the cars will be travelling the 1,618 km route (1,005 Roman miles) in a counter-clockwise direction. This is the first time this has happened since the competition was revived in 1977 but was a regular occurrence during the early editions of the original race between 1927 and 1957.

Also for the 34th time, Chopard Co-President Karl-Friedrich Scheufele demonstrated his unwavering passion for driving classic cars by taking his place on the start ramp, this year behind the wheel of the distinctive, strawberry-red Mercedes-Benz 300SL ‘Gullwing’ that has been part of the Scheufele family collection for more than 30 years.

Beside him throughout the event will be motorsport legend and long-term friend of the Maison Jacky Ickx, with whom Mr Scheufele has driven the 1000 Miglia on more than 15 occasions.

It was that first outing together that formed the basis for friendship between these like-minded ’gentleman drivers’ that epitomises the spirit and camaraderie for which the 1000 Miglia has always been renowned.

The duo is leading a team of five Chopard cars competing this year, including an Ermini Sport 1100 (1954) driven by Milan-based fashion guru Alessandro Squarzi and a Porsche 356 (1957) that, with none other than Romain Dumas at the wheel, will undoubtedly prove spectacular to watch.

The two remaining Chopard Team cars to look out for are a stunningly beautiful 1956 Alfa Romeo 1900 Super Sport and a Fiat 1100 with rare Zagato bodywork – complete with the coachbuilder’s signature ‘double bubble’ roof.

A long and winding road

In keeping with tradition, the rally began at 1.30 pm with the oldest car leaving the start ramp in Brescia’s tree-lined Viale Venezia first, and the others following at 30-second intervals in order of age.

Yesterday saw the cars take on the challenging Cita Pass on the way to a finishing point in the coastal city of Viareggio, with an early start on Day Two to cover the 350 km route to Rome via numerous historic hill towns and tiny villages.

The third day promises to be the most challenging and exciting of all – a 400 km run through the ‘boot’ of Italy punctuated by a stop in the dramatic city of Orvieto before the drivers press-on through the Chianti wine-growing region and on to the twisty and demanding roads of the Futa and Raticosa passes.

After an overnight stop in Bologna, the fourth and final day will take the crews back to the finish in Brescia via Modena – home to the great Italian car brands Ferrari and Maserati – and the operatic centres of Mantova and Verona.

The legendary 1000 Miglia atmosphere began to build the day before the start of the race, when Mr Scheufele and Mr Ickx hosted an exclusive dinner at the staggeringly beautiful Albereta restaurant, situated high in the hills of Lombardy outside Brescia.

Ahead of an exceptional meal which included risotto made with pumpkin flowers and finely sliced herbs alongside fillets of local Fassona steak garnished with cherry tomato confit and capers grown on the island of Pantelleria – Mr Scheufele unveiled the much- anticipated Mille Miglia 2021 Race Edition watches.

This year’s model takes the form of a 44-mm chronograph which will be available in two limited edition versions: a 1,000-piece all-steel model or a 250-piece counterpart with bezels, pushpieces and hands made from ethical 18-carat rose gold.

Both have slate grey, satin-brushed galvanic dials complemented by sharply contrasting chapter rings and chronograph subdials while red-tipped markers make for optimum legibility. The three-counter set-up enables individual recording of 12-hour, 30 minute and 60-second elapsed times, while speed and distance calculations can quickly be made using the dashboard-inspired, white-lacquered markings on the black ceramic insert of the tachymeter bezel.

As with all of Chopard’s Mille Miglia watches, the 2021 Race Edition’s motoring pedigree is confirmed by the presence of the famous 1000 Miglia red arrow on the dial, while the caseback proudly bears a chequered flag design, the 1000 Miglia logo and the inscription ‘Brescia-Rome-Brescia’ as a reminder of the event’s celebrated circular route.

A brief history of the 1000 Miglia

Founded in 1927, the 1000 Miglia is among the most famous historic motoring events in the world. When it was originally run, the 1,618km course (equivalent to 1,005 Roman miles) was an all-out race that started and finished in Brescia, with Rome marking the turning point for home.

In 1955, the famous British racing driver Sir Stirling Moss and his navigator, motorsport journalist Denis Jenkinson, won the race in a record time that still stands today, completing the course in ten hours, seven minutes and 48 seconds at the remarkable average speed of 97.96 mph.

After ceasing to exist in its original race format in 1957, the 1000 Miglia was revived in 1977 as a time and reliability trial for cars built between 1927 and 1957. It still covers 1,000 miles following much of the original route through the heart of Italy from Brescia to Rome and back.

The event sees some of the finest, rarest, most significant and valuable cars of the original era take to the roads in the manner for which they were intended, creating an intoxicating assault on the senses of sight, sound and smell and turning back the clock as they pass through the same towns and villages where crowds lined the roads during the 1000 Miglia’s early decades.

Founded in 1860, Chopard, The Artisan of Emotions, perpetuates the heritage of traditional know-how and ancestral crafts through contemporary and ethical creations.

Cultivating limitless creativity, which enables everyone to find precious objects within Chopard collections that are in tune with their own nature, the Maison takes craftsmanship to peak levels through the work of passionate and experienced artisans. Moreover, since July 2018, the Maison has been the first watch and jewellery maker to use 100% Ethical Gold for the production of all its watches and jewellery.

Today, Chopard is run by the Scheufele family and masters more than 50 professions at its three production sites, where particular attention is paid to internal training and the transmission of know-how.

The Maison lives in step with its prestigious partnerships: a loyal official partner to the Cannes Film Festival since 1998, it has also been the official timekeeper of the legendary Italian 1000 Miglia classic car race since 1988.

Check out all the Chopard Mille Miglia pieces in stock on our Edwards Lowell boutique. CLICK HERE